The SeaWorld Craft Beer Festival Logo is displayed on a cart for the 2021 season.
The 4th Annual Craft Beer Festival at SeaWorld, Orlando is taking place between August 13th and September 12th, 2021 (on Fridays, Saturdays, and Sundays only) — and I was at the opening day of the festival to take photos of the menu boards (with all the prices) and sample a couple of items.

The cost of individual food items has risen slightly, but it's inline with the price increases we're seeing elsewhere. The best way to save a couple of dollars (if you're going to try eight or more items) is with the Craft Beer Festival Sampler Lanyard. It allows you to pre-purchase 8 or 12 item sample entitlements at a discount. 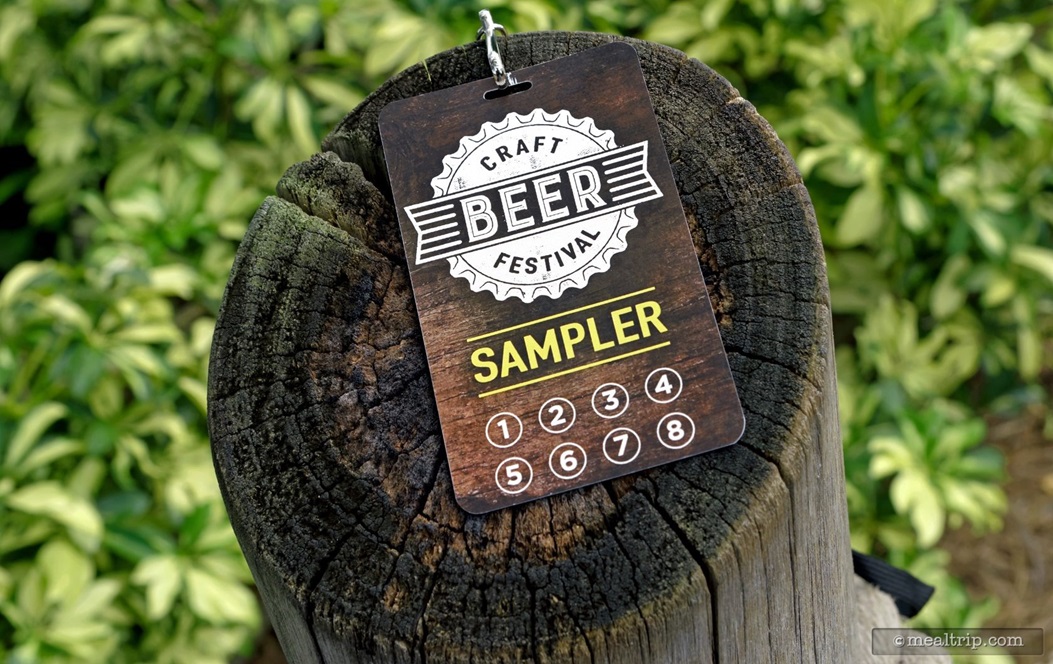 The SeaWorld Craft Beer Festival Sampler Lanyards are back for 2021 and are still a great way to save a little money and make the whole "getting food and beer" process easier at each booth.

While there is no "discount" (per say), for annual passholders this year, you can get a 15 Sampler Lanyard for the price of a 12 item Sampler Lanyard. That might not sound like much, but it does actually break down the per-item price quite a bit. This year, I'm going to post the price break-downs for each of the items along with the photos here on the Mealtrip site. 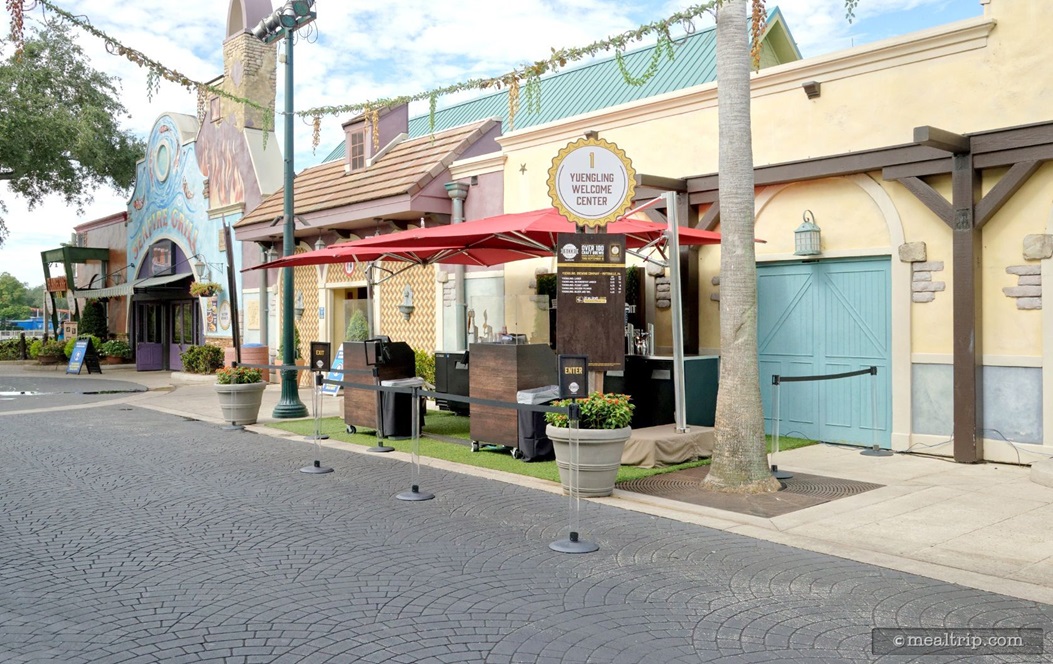 The Yuengling Welcome Center booth is a great place to purchase a Sampler Lanyard. It's the first booth on the "trail of booths" and there's usually a couple of checkout registers to help speed things up. There's a couple of Yuengling beers on tap here as well, but no food.

If you would like to take a look at all the menu boards with prices, the article "SeaWorld, Orlando Craft Beer Festival Menu Boards with prices for 2021" is the one to check out. If you would like to see a quick loading text-based list of everything available at the booths this year, the article "Food, Beer, and Cocktail Menu Items for the 2021 Craft Beer Festival at SeaWorld, Orlando (Text List)" is where all of those are located. Most of the booths are located around the SeaWorld Lagoon (not sure if the "Lagoon" actually has a name), but there's a map that's been posted with each of those articles listed above.

Let's kick things of by eating something! Once you start getting into the main festival area, the first savory food item you'll see this year is the Brews & Chews Booth featuring Funky Buddha Brewery. 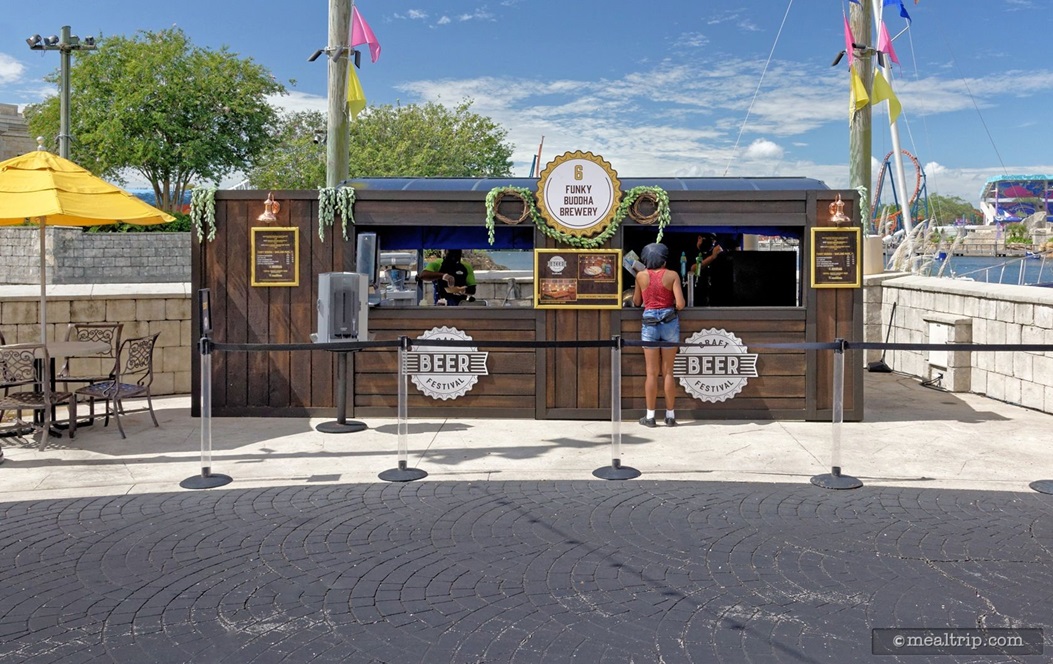 Ah, the first booth with savory food at the 2021 Craft Beer Festival at SeaWorld is the Brews & Chews kiosk featuring Funky Buddha Brewery.

From the Brews & Chews Booth, I picked up the new Beer and Cheese Stuffed Beef Slider. 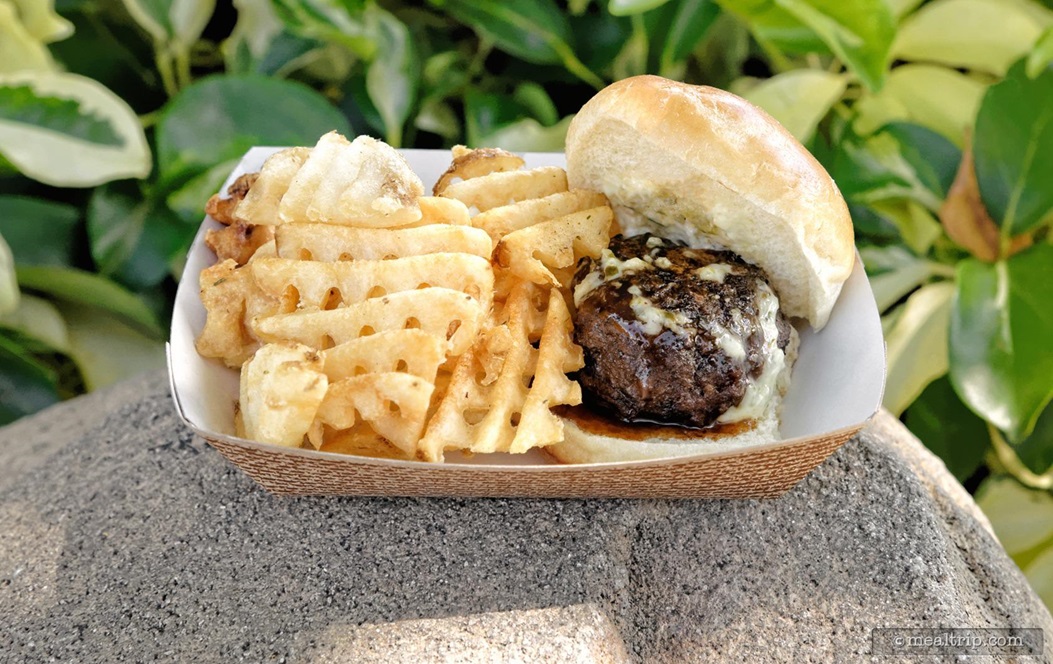 This Beer and Cheese Stuffed Beef Slider with Pickled Mayo and Ale BBQ Sauce is served with Waffle Fries!

I found the quality and seasoning of the beef in this little slider to be pretty great, and about as juicy as a small slider patty could be. While I have had a full sized "cheese stuffed" burger before, it's probably a difficult thing to do with a smaller beef patty. I really didn't detect any beer or cheese (or beer cheese) inside the patty or anywhere else on the slider. My best guess is… the beer cheese gets steamed away the longer each patty sits on the grill. This gives you a great burger patty, but not one that's going to ooze with beer or cheese when you bite into it.

While we're still near the start of the festival area this year, I wanted to point out that a few more of the beverage only locations have moved into permanent restaurant locations... as opposed to being in smaller, dedicated festival booths.

Near the entrance of each restaurant you'll find one of the festival placards that correspond to numbers on the festival map (which you can pick up at the festival welcome center). 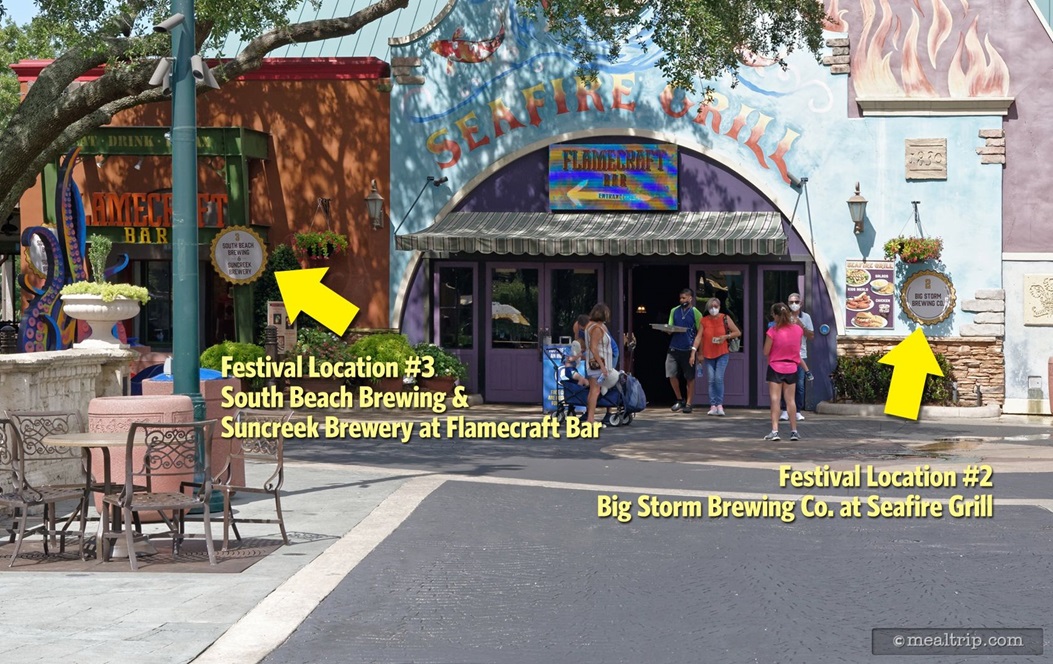 Some of the smaller booth locations have been moved into permanent restaurant. Most of these are "beverage only" locations. If you're trying to find a specific number from the festival map, these numbered placards are attached close to the front entrance of each restaurant.

If you happen to want one of the specific beers in one of these locations — and if you happen to be there at "peak" dining time (around lunch or dinner), the lines inside each restaurant can get long. 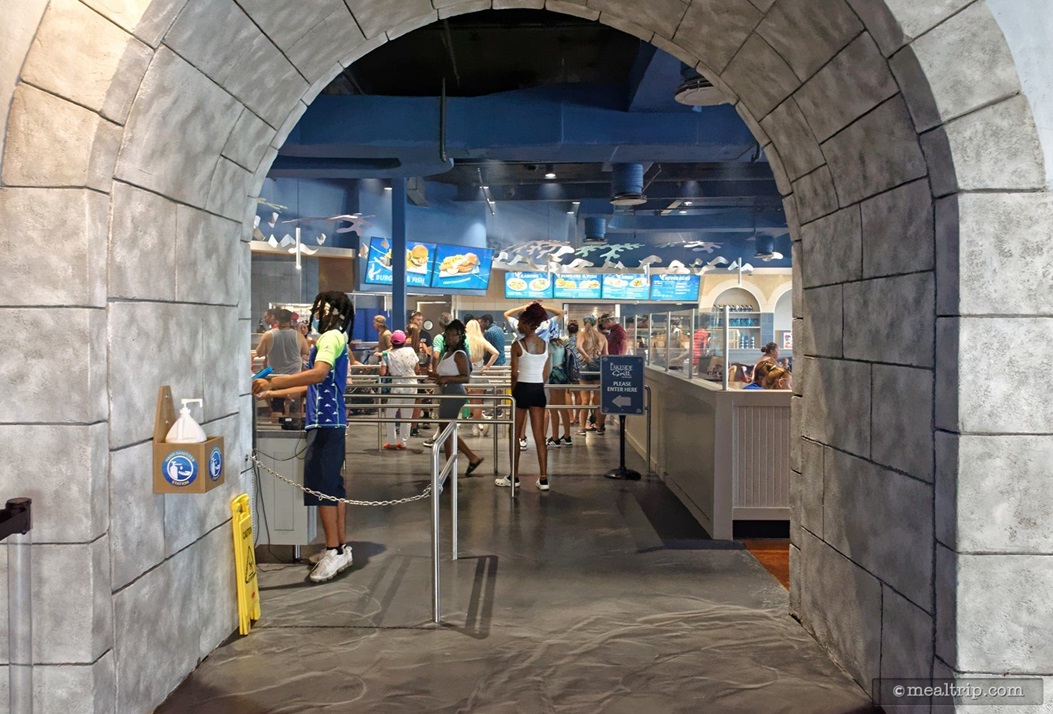 In some locations, it might not be possible to pop in and get a sample of beer really quick, because the restaurant's normal customers are also in line to get food. If you visit one of these locations before or in between traditional lunch and dinner times, it might be less crowded.

Guests are mostly ordering full meals and not getting beer sample. In one location, I saw where they were trying to re-route "beer only" festival guests through a shorter process, in other locations — you may just have to wait in line. So if you want a special festival beer item in one of those locations — my best advice is, visit any time other than traditional lunch or dinner times.

The next booth on my Craft Beer Festival walkabout is the Kraft Heinz & Sierra Nevada Brewing Company booth. 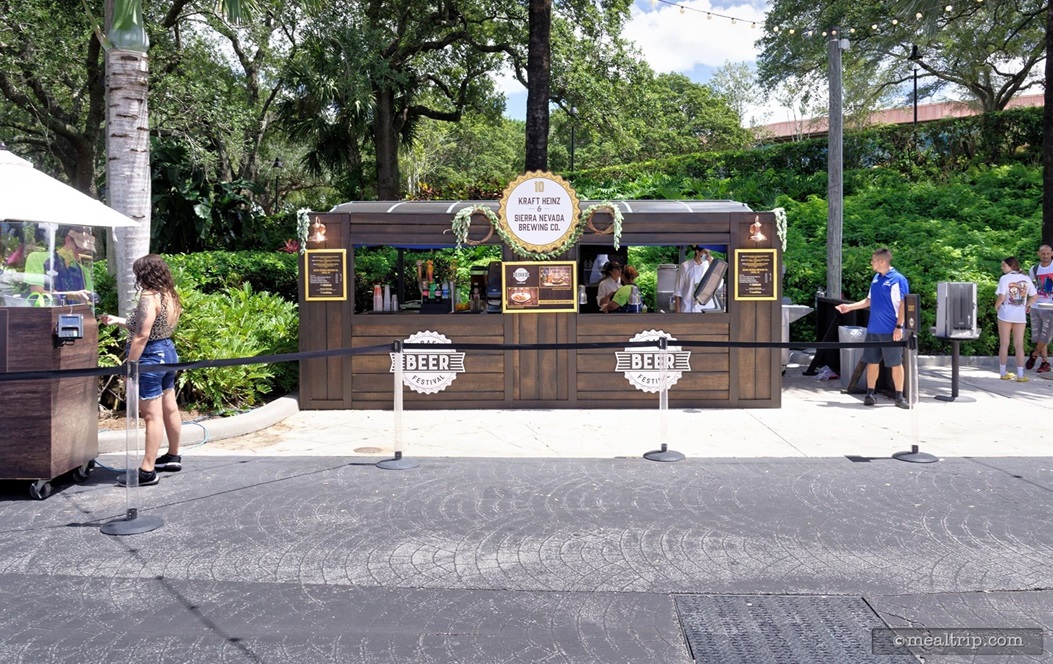 I thought I'd try the Buttermilk Fried Chicken with Kraft Heinz™ Honeyracha™ Sauce. 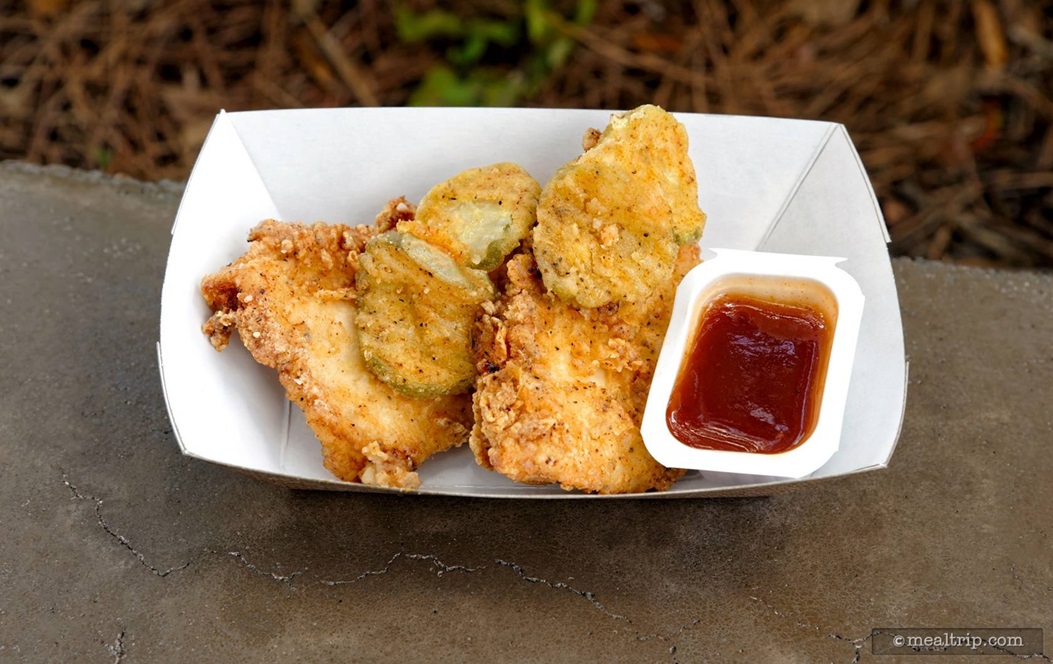 The HONEYRACHA™ Buttermilk Fried Chicken is also served with some fried pickles!

Surprisingly, this has quickly shot to the top of my list of festival favorites. What you get here, are two boneless cutlets of chicken that have been lightly seasoned, battered in a buttermilk coating, and perfectly fried. I'm not sure if these are being made "as needed" or if they're a food service product — but I've tried these on two separate occasions now, and they've been really great both times.

The coating has a light, fine grain, crisp texture while the chicken inside remains juicy. This dish is served with a couple of fried pickles that add a nice, lightly garlic, veggie kind of juicy contrast to the chicken. At first, I wasn't sure about the Honeyracha sauce basically being handed to you in a little plastic "McSauce" cup as opposed to the sauce being applied directly to the chicken. But it is a practical solution to the "too much sauce / not enough sauce" problem. This way, you control how much or how little you want.

The Heinz Honeyracha Sauce itself is pretty unique... it's sort of a mash-up of ketchup and mayo with a sriracha pepper kick balanced with honey (and a whole lotta sugar) ... which sort of turns this into a new category of product. I don't really have anything to compare it with. It's definitely worth a try, but if you don't like spicy "hot" things, this sauce probably isn't for you. I'm happy to say though... the Buttermilk Fried Chicken is good enough on it's own, that you really don't need the sauce.

At this same Kraft Heinz & Sierra Nevada Brewing Company booth, I picked up a full-sized Frozen Hurricane... because at 12pm it was 114°F outside. (Okay, maybe it wasn't that hot, but it sure felt like it.) 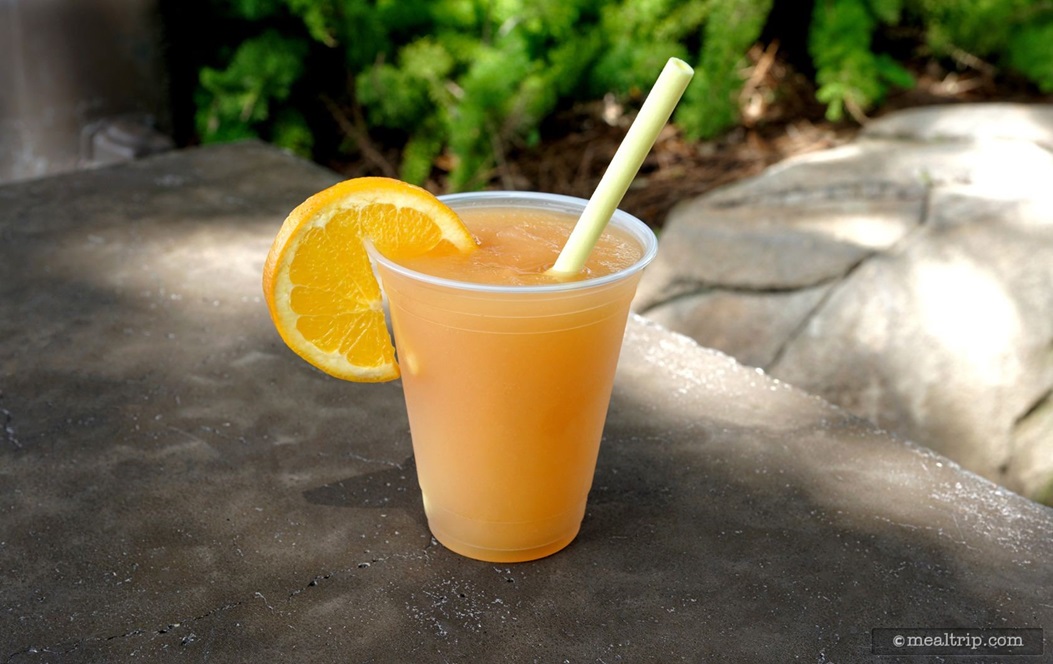 This Frozen Hurricane combines Bacardi light white rum, Sailor Jerry spiced rum, passionfruit juice, and a little grenadine. There are 16oz and 7oz sizes available (this is the 16oz). The smaller 7oz size cup is the one you'll get if you purchase it using the Sampler Lanyard.

I know, I know — it kind of goes against the nature of the "beer" festival, but I'm a sucker for a frozen drink on a hot day, and this Frozen Hurricane did not disappoint. It's a great combo of Bacardi light white rum, Sailor Jerry spiced rum, passionfruit juice, and a little grenadine for color. There are basically two sizes available at the booths, and this is the 16oz size for $12.99. The smaller size Frozen Hurricane that you can get with the Sampler Lanyard comes in a 7oz cup.

The Cigar City Snacks booth is located behind the "Bag $" gift shop and has some covered and full-sun seating options. (I don't know what the name of the gift shop is — but I just looked on the SeaWorld map and it only has a bag icon and a dollar sign icon — so I've decided to call it the "Bag $" gift shop.) 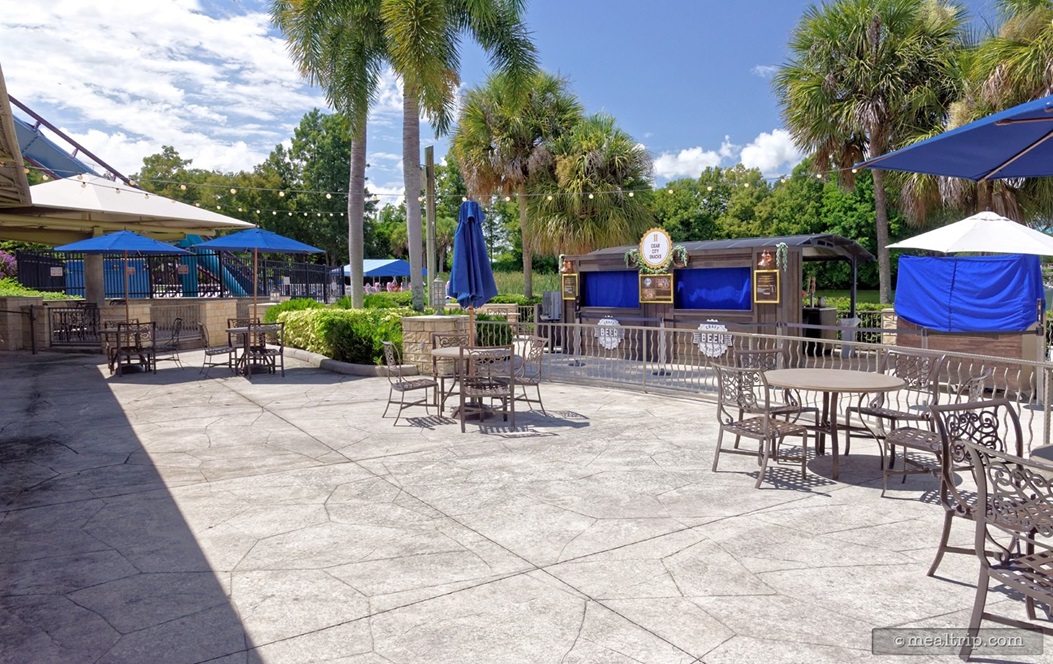 This is the Cigar City Snacks booth and it has a great courtyard with full sun, partially covered, and fully covered seating options.

Here you'll find another one of this year's new items (and it's one of the festival's few gluten friendly items too)… the Old Bay Steamed Giant Prawns with Fresh Lemon and Tartar Sauce. 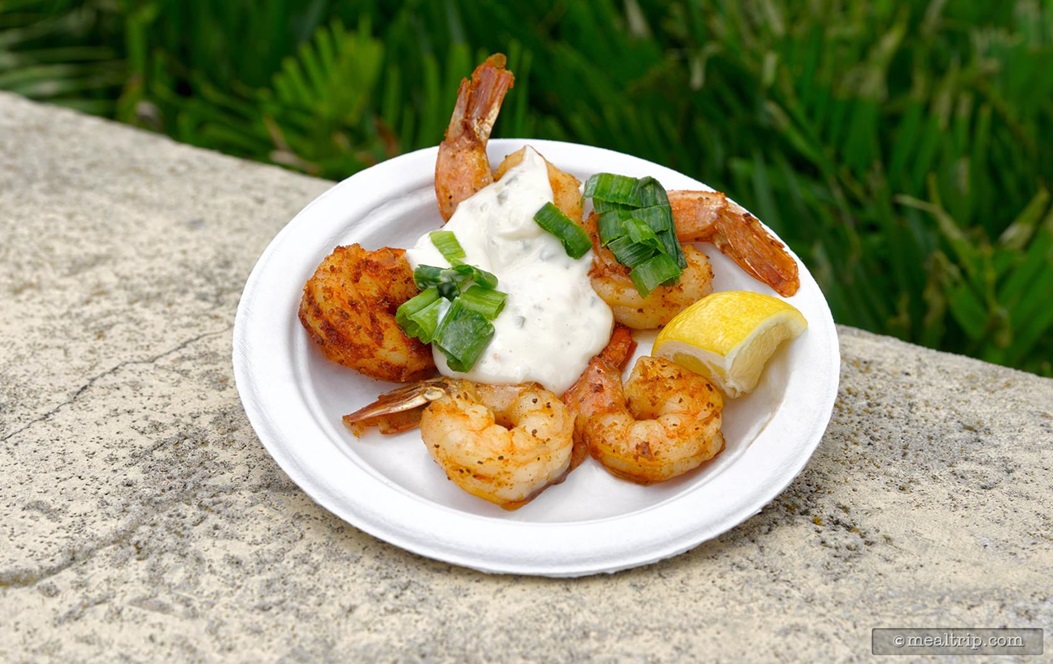 "Old Bay" is a nostalgic McCormick seafood seasoning that's usually available in a yellow and blue tin container. These were basically five day-boat sized shrimp steamed in a lightly seasoned vinegar and water broth (just guessing there, but that's the traditional "old bay" method), along with a dollop of tarter sauce and a cocktail lemon with a few green onion bits tossed on top for color.

I'm not sure about the tarter sauce. I've never really had tarter sauce with Old Bay Shrimp before… but that's probably just me. It just seems like the tarter sauce was a missed flavor opportunity to do something more with beer. Cigar City has a nice "Guayabera Citra Pale Ale" (also served at the booth) that could have been used in something like a Thai Mango Sauce… but I digress.

My final item for this walkabout is probably the best "value" of the day. Over at the "Wicked Weed Brewing" booth (which has been in the past, a Nathan's Hot Dog Stand)… I found and amazing Beer Cured & Smoked Pulled Pork dish that's served with Cajun Rice, BBQ Baked Beans, and Pickled Onions. 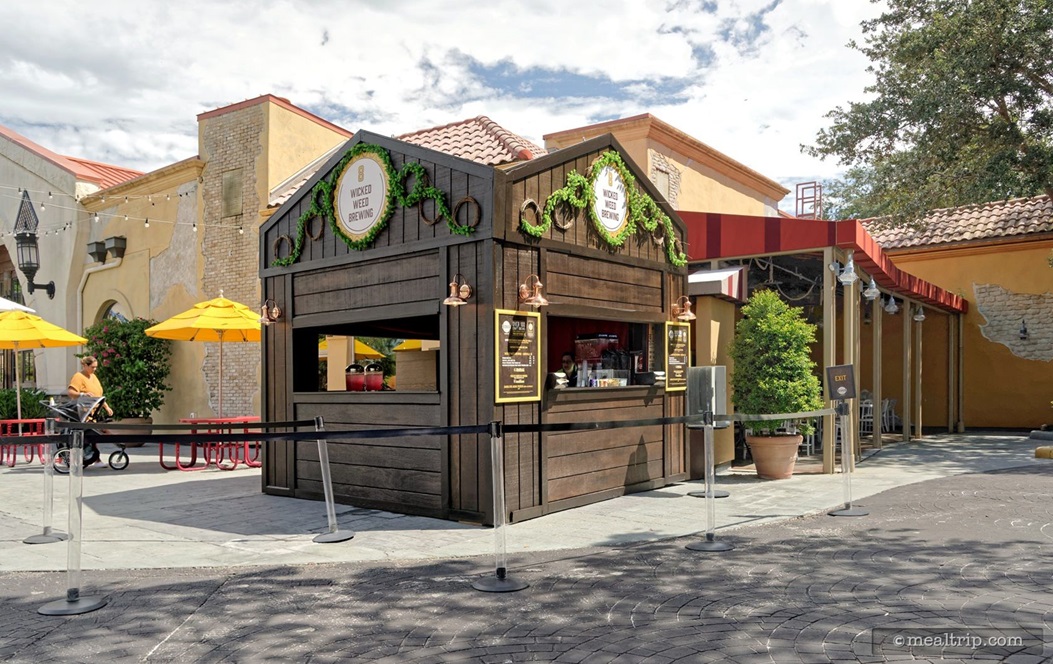 For the 2021 Craft Beer Festival, this Nathan's Hot Dog Stand has been renamed the "Wicked Weed Brewing" booth — that features a great Pulled Pork dish, and also (still) a Nathan's Hot Dog item.

If you're okay with all the flavors and textures in the bowl (I know some people aren't crazy about baked beans) — this one has a really good portion size, and a great combination of flavors. The BBQ Baked Beans are a little sweet and contrast great with the beer cured, smoked pulled pork — the rice brings a neutral, dry texture to mix and the pickled onions provide a nice "snap" and crunch. 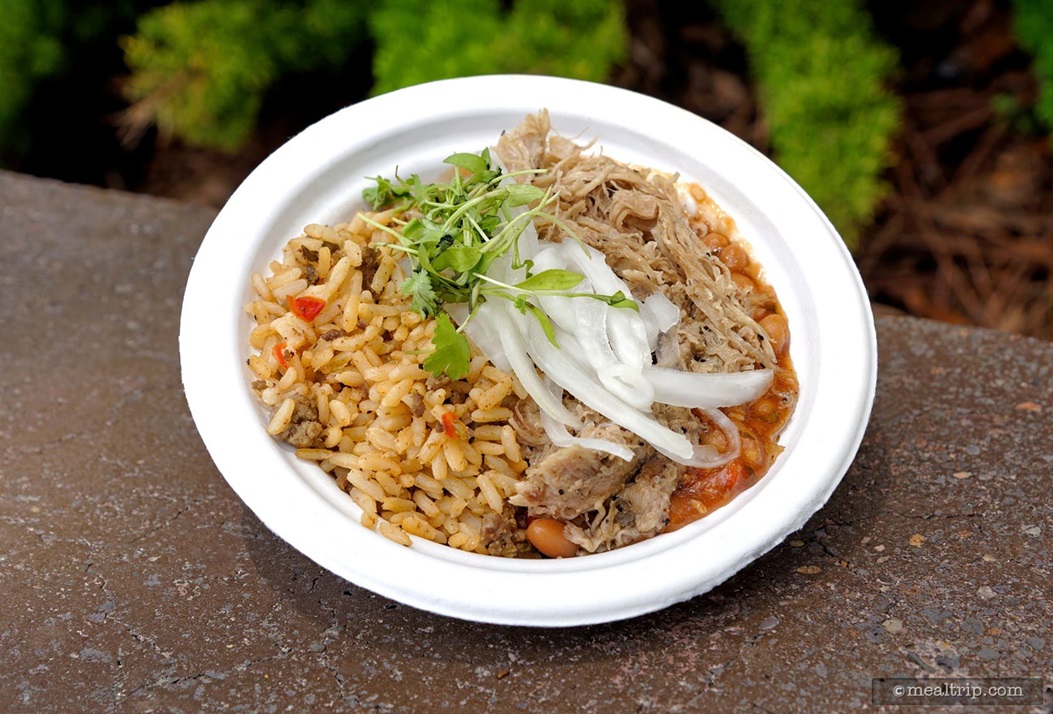 This Beer Cured & Smoked Pulled Pork dish served with Cajun Rice, BBQ Baked Beans, and Pickled Onions is a great value no matter what method you use to purchase it. At the full price of $8.99, it's just short of a meal sized portion you'll find in some of the counter service restaurants.

I wouldn't hesitate eating a portion size like this for dinner on any given night. With most of the entrees hovering around $15 in any of SeaWorld's counter service restaurants — this special festival item might be the least expensive "meal" you can get in the park!

I'll be back next week with another walkabout article with more food and beverage photos from around the festival! 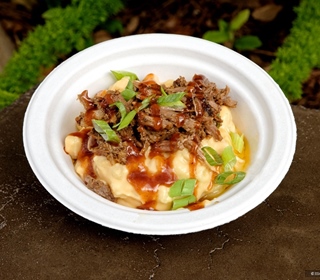 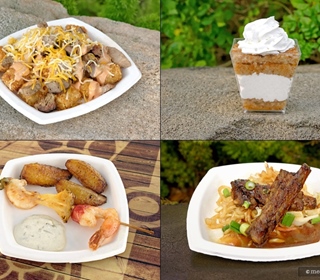