March 3rd, 2017
|  by Mealtrip
Reading takes too long... just show me the 14 photos from this article.
I have to say, I'm having a lot of fun on my Saturday food walks at SeaWorld's Seven Seas Food Festival. The weather has been great so far, and it's been fairly easy finding a table and/or chair (i.e. a place to "be" with your food and beverage sample), just to sit for a few seconds and enjoy the food and company. 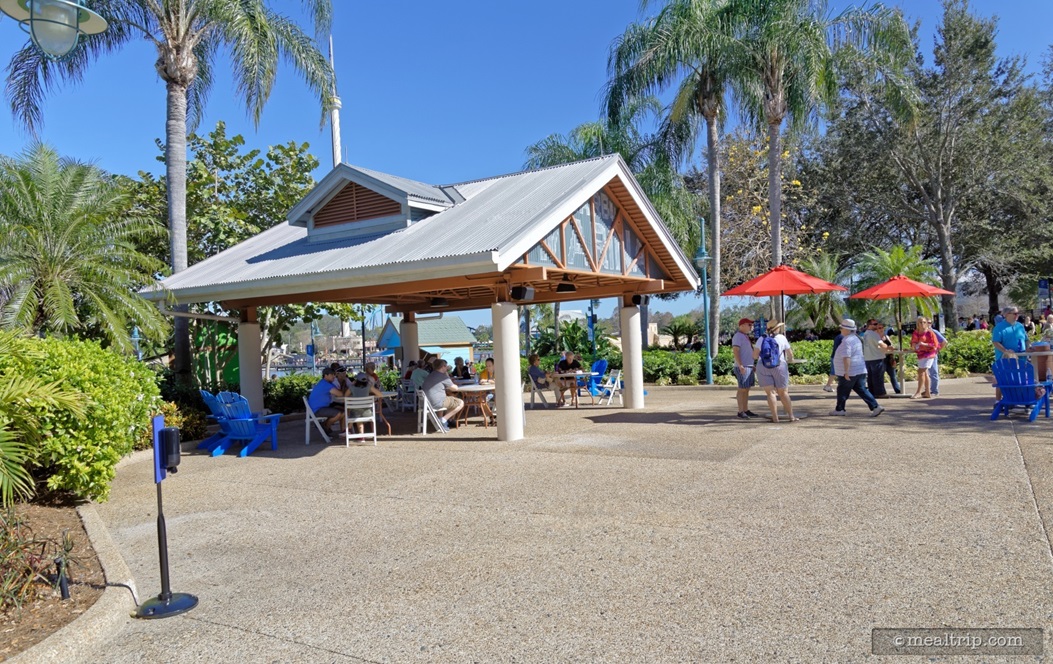 This is one of the more extravagant seating areas (which can be found near the Asia and Korean food kiosks). This larger "special event" area of the park is open during the Seven Seas Food Festival.

I've actually run into a few long-time Disney passholders and DVC members on my Saturday strolls at SeaWorld and there has been at least one unanimous sentiment that runs through our brief conversations, and that's how the SeaWorld festival is just as much fun... while being a lot more reasonable than some of the recent offerings at Epcot. 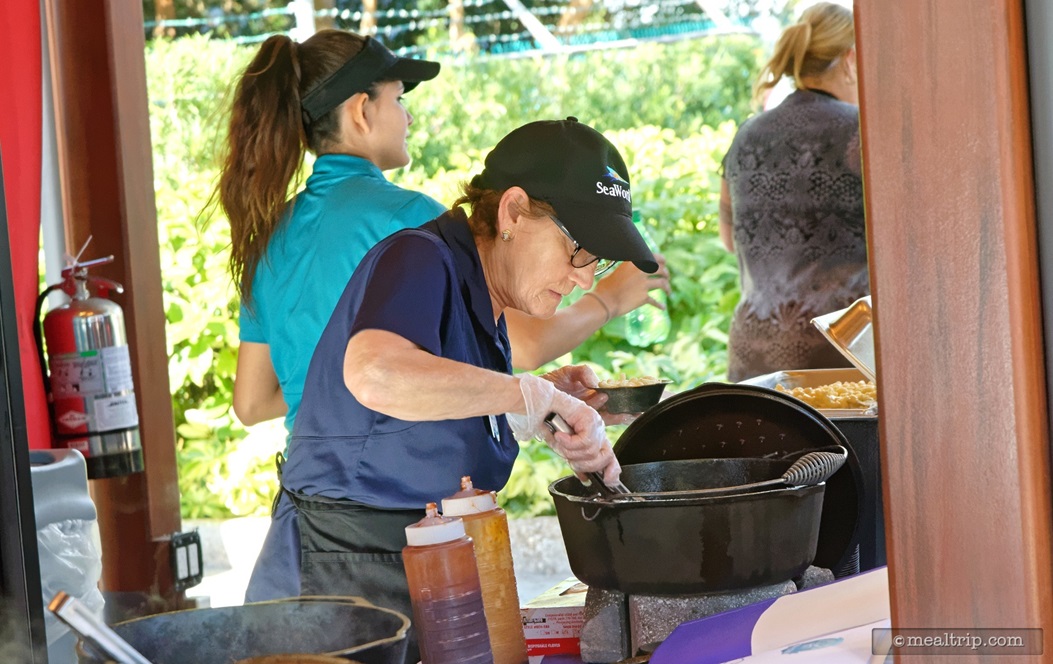 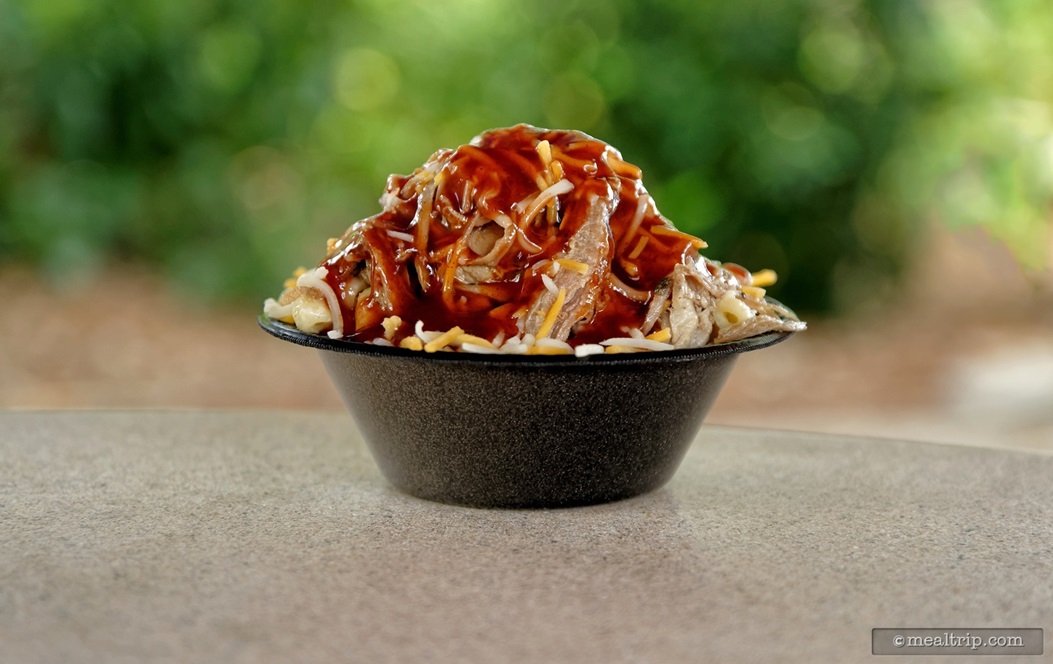 A BBQ Mac and Cheese Sundae Bowl (this is the sample size that's included on the lanyard program)! It's so cute and tangy... this is not a "sweet" BBQ sauce. You can also get this without all the sauce. The BBQ meat has a decent smokiness without it.

It might not seem that way just looking at the numbers. The average per item cost at Epcot's (currently running 2017) Flower and Garden Festival is $5.46 per food item, while at SeaWorld... the per item cost is $5.16 per food item. (Those are average costs, so add up the total cost of all food items, divided by the number of food items… and then you have to add Florida state sales tax back into it, which we did not do for either park. Okay legal, enough with the fine print already.)

Initially, that doesn't seem like such a big difference, but those guests "in the know" have been seeking out a great deal at SeaWorld called the "SeaWorld Orlando Seven Seas Tasting Lanyard" (no you don't taste the lanyard… they'll have to work on the slightly ambiguous name for next year). 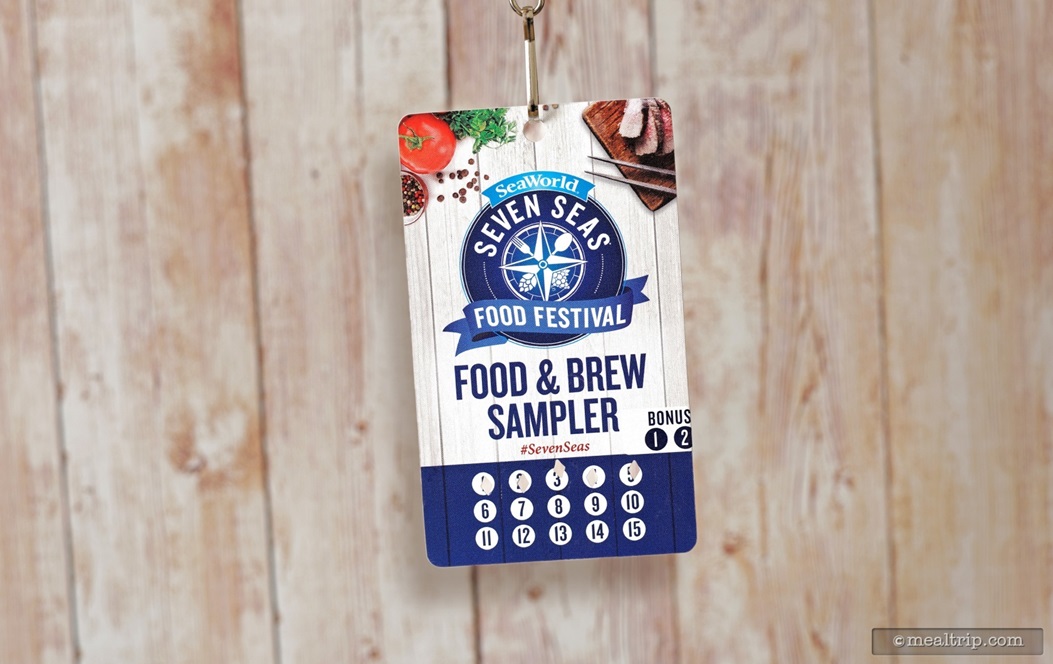 Basically, you purchase a plastic card on a lanyard that you can wear around your neck (or wherever else you want), and instead of paying at each food booth, they'll scan your lanyard card and put a little punch in it for each food or beverage item that you select. 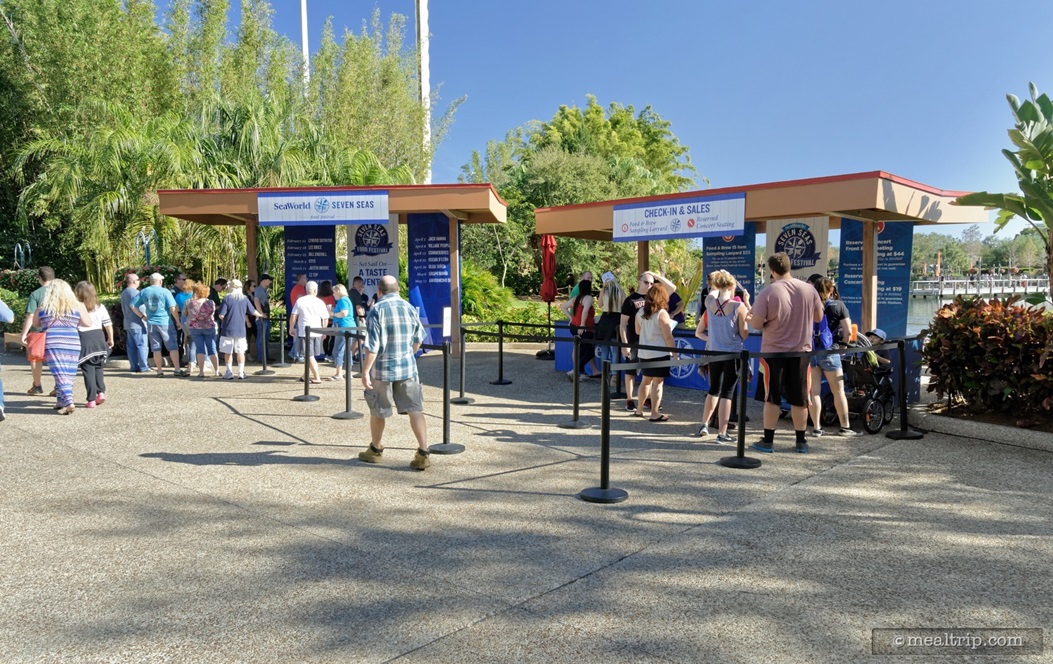 You could purchase one of the Seven Seas Tasting Lanyards from a small cart near the front gate, or at these larger buildings near the "special events" entrance (near the BBQ or Latin cuisine booths).

If you purchase a 10 sample lanyard, your per food or beverage item cost is just over $4.00. If you purchase a 15 sample lanyard, you cost is just over $3.60 per sample. An additional benefit for someone like me, (who really dislikes the concept of money while trying to have fun), is that you can just pay once… and forget that money exists. That… is something you can't do at Epcot (sorry… still love you Epcot, but I call it like I see it).

This is the Mediterranean Market sign and the kiosk features some guest favorite items. The food booth is located near the "Shark Encounter" area of the park. 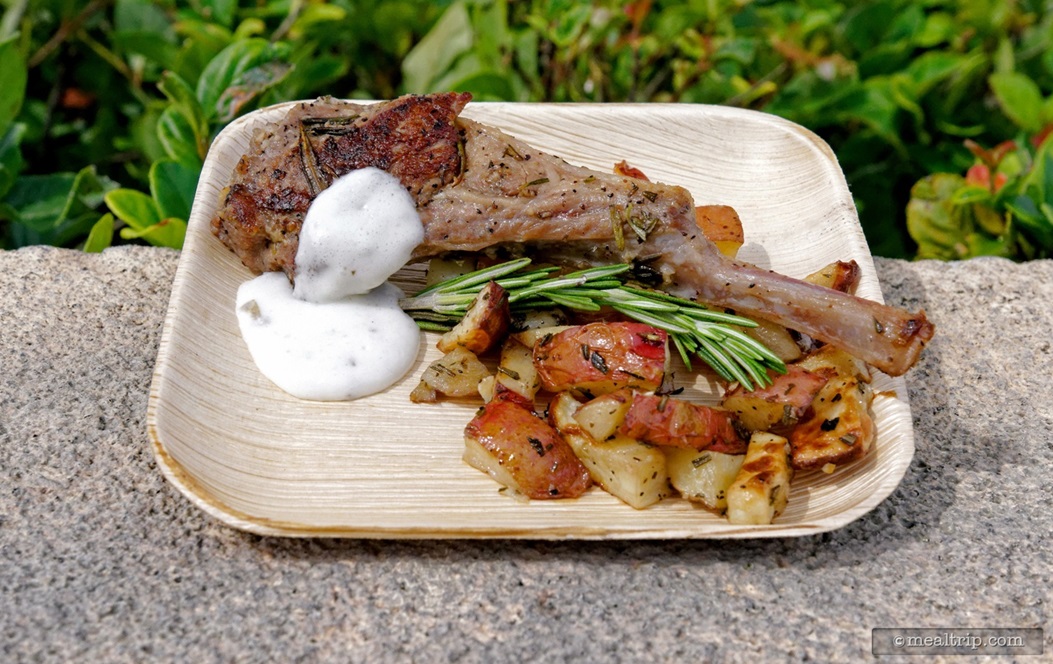 Grilled Lamb Chop Marinated with Rosemary Mint and Served with Roasted Potatoes and Greek Tzatziki Sauce from the Mediterranean Market at the Seven Seas Food Festival. 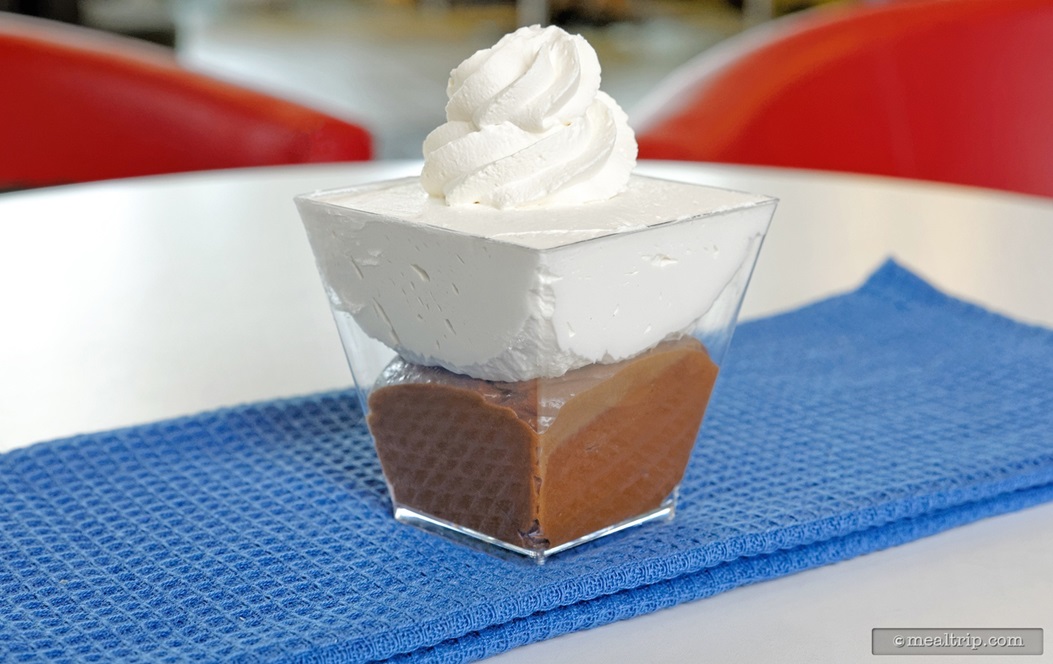 You can purchase a Potato Pancake with House-made Apple Sauce from Epcot's "Bauernmarkt" at the Flower & Garden Festival for $3.75. But for 15 cents less (with SeaWorld's Sampling Lanyard), you can get a New England Lobster Roll Served on a Buttered Roll from SeaWorld's North Atlantic Market. That same Lobster Roll will cost $7.75 without the Sampling Lanyard.

The Korean and Asian marketplace booths are pretty close to one another and are located on a walkway just before you get into the concert stadium area. 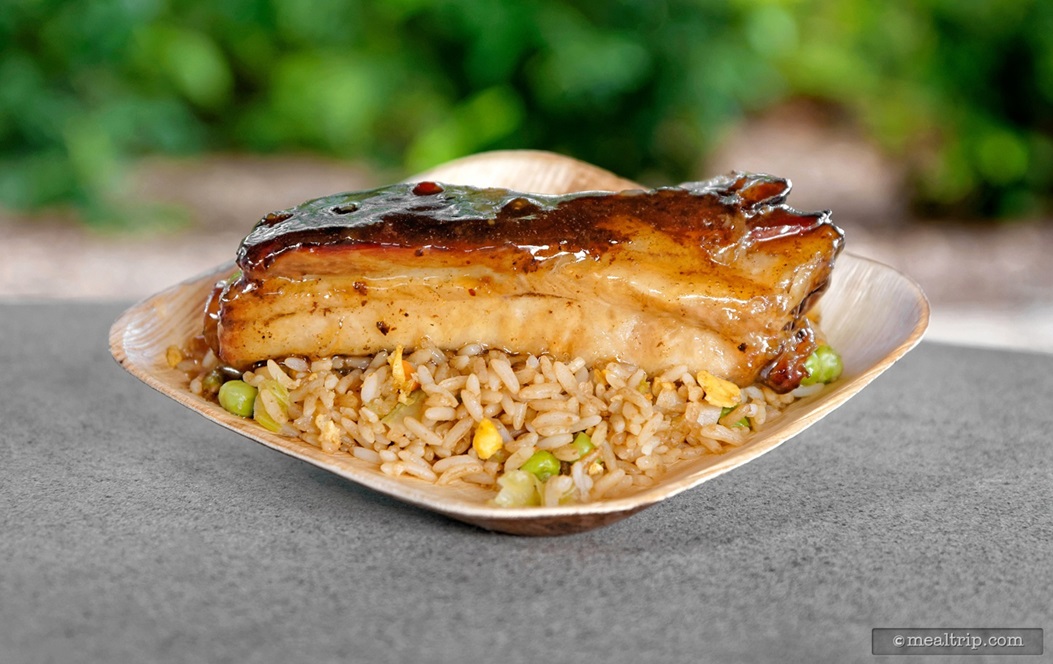 Well-executed street-food being what it is… one of the main reasons I keep hearing "wow, I'm really having a great time at the Seven Seas Food Festival" is that guests are able to just focus on eating and drinking great food and beverages, without having to worry about the cost of every single thing. That's what these festivals are supposed to be… a fun food and beverage tasting experience. 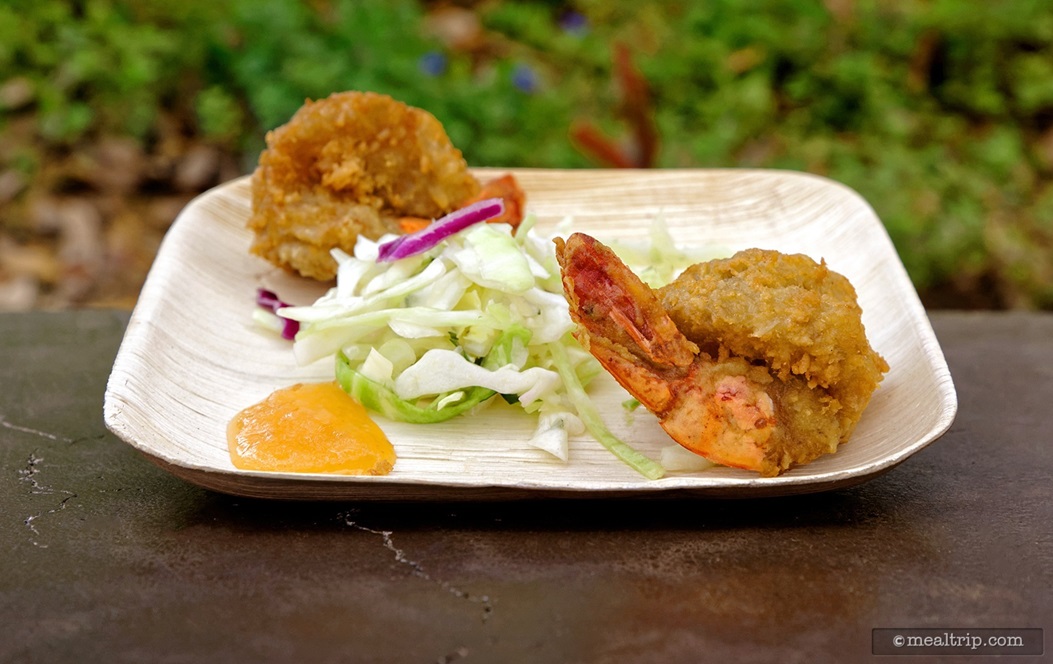 The Florida Market booth has been a favorite this year. Pictured here are the Coconut Shrimp served with Swamp Cabbage Slaw and Mango Horseradish Sauce. 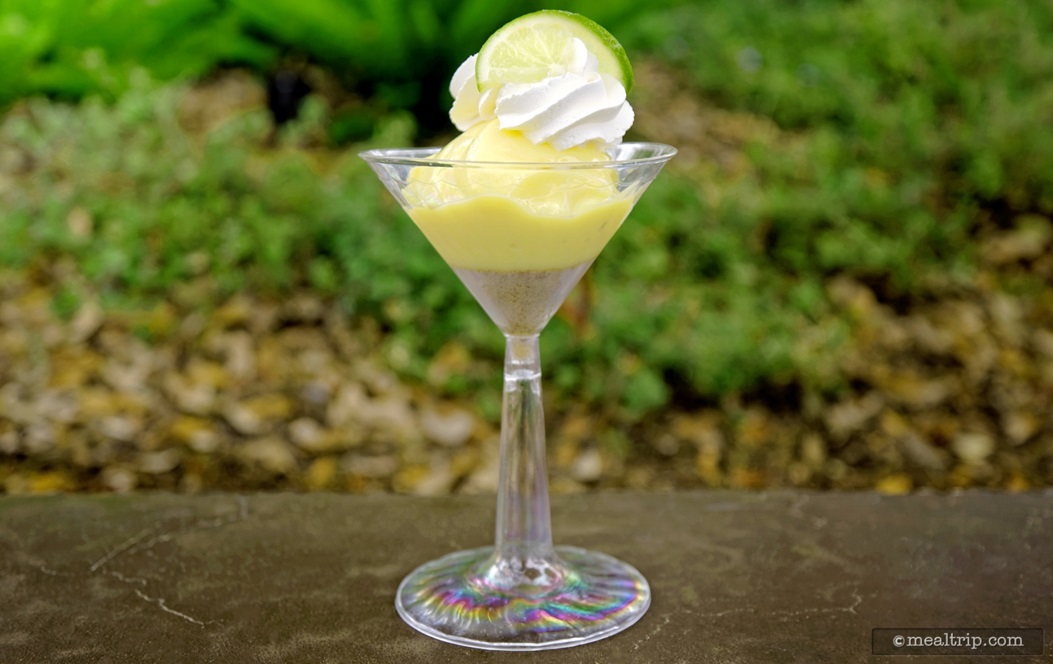 A Key Lime Martini from the Florida Market booth is not a drink, but a dessert served in a martini glass! All the components of a pie are there, graham crackers on the bottom, key lime filling, and whip cream on top. 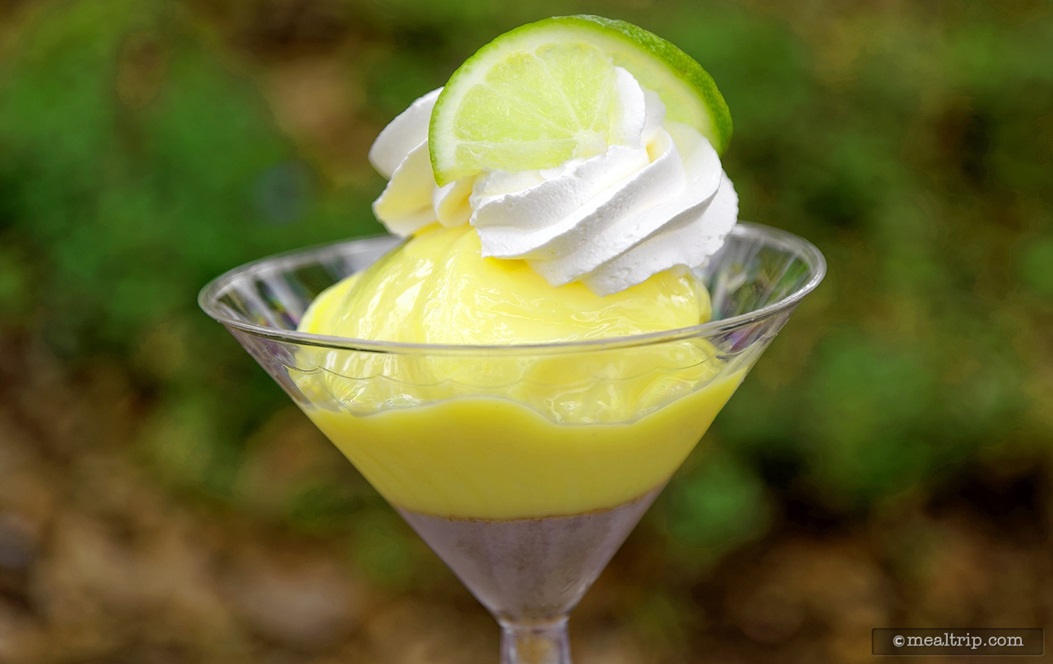 The textures and look of this one were spot-on. I do wish it had more key lime "punch". It was a very mild take on a traditional key lime pie. (Although I have to say, I feel that way about most key lime pies, so it might just be me.)

We have one more food photo based "Saturday Stroll-Around" article planned after this one, and then we'll take a look at the cool (and free, exclusive for passholders) Mason Jar Glass that we picked up on our third visit to the SeaWorld Orlando Seven Seas Food Festival.
next post
New "Celebration at the Top" Dates Just Added and Booking Now!
previous post
Menu Boards and Prices for 2017 Food Booths
return to top of page
Reading takes too long... just show me the 14 photos from this article.