June 28th, 2016
|  by Mealtrip
Reading takes too long... just show me the 14 photos from this article.
The Food and Wine Festival Preview Lunch for Tables in Wonderland members is one of the longest-standing events that we've had over the years. Usually held a couple months before the festival starts, it gives TiW Members a chance to preview some of the new food and beverage offerings that will be arriving at the annual fall festival. The TiW Food and Wine Preview Lunch was held last Sunday (June 26th, 2016) in the World Showplace Pavilion at Epcot. 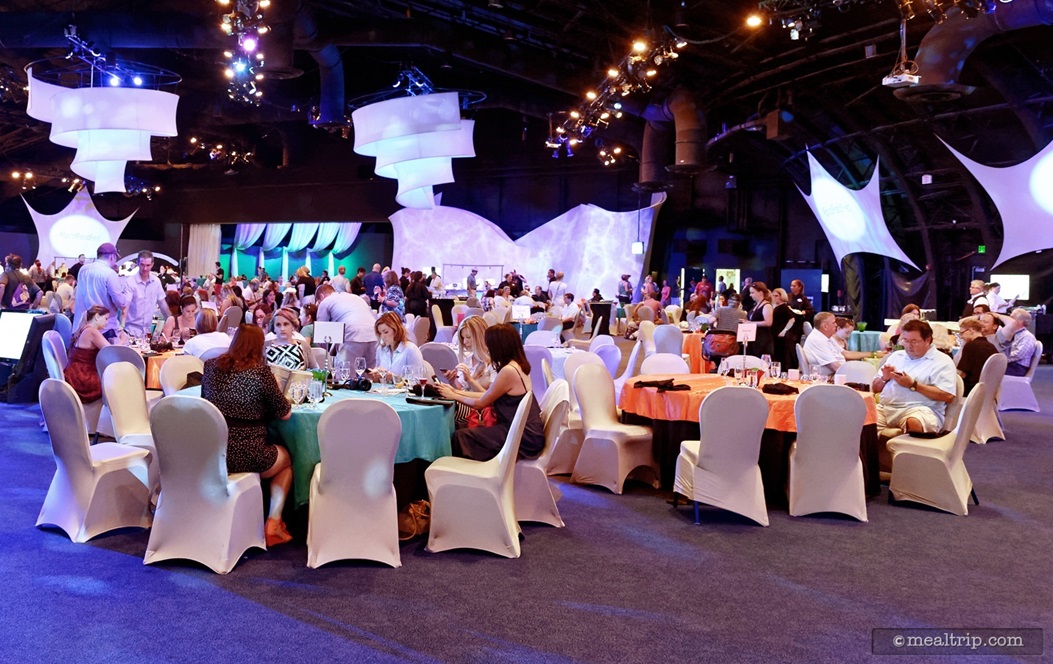 Everyone looks so peaceful at the Tables in Wonderland Food and Wine Festival Preview Lunch (this shot was taken toward the end of the event).

There's so much information that's given out, chefs to mingle with, and food to sample, it's really impossible to cover it all. So I'm going into "Cliff Notes" mode, and will try to cover just a bit of the information that everyone may be interested in.

The Food, Beverages, and Value for TiW Members

The cost of the TiW event this year was $135 (plus tax, etc. et al) and (oddly for foodies) I'm often asked if it's worth it. I can only answer that by itemizing the items and by adding that it is a really fun, social event. You're participating in the event with other TiW members who are also really interested in food and wine.

For our 2016 Preview Lunch there were 10 savory items (that will be featured in the kiosks around World Showcase), 4 dessert items, and 14 "adult" beverages. With the average food item from the kiosks being around the $5 mark, and beverages in the $6-$8 dollar mark… you could, mathematically, get your money's worth out of one of these preview lunches. In addition to all of the food and beverages, each guest receives a program listing just about every special event that will be at the festival, with dates, times, and prices. Based on last year's program, it was about 95% complete (things are subject to change naturally), but it is good, solid piece of planning kit to have. 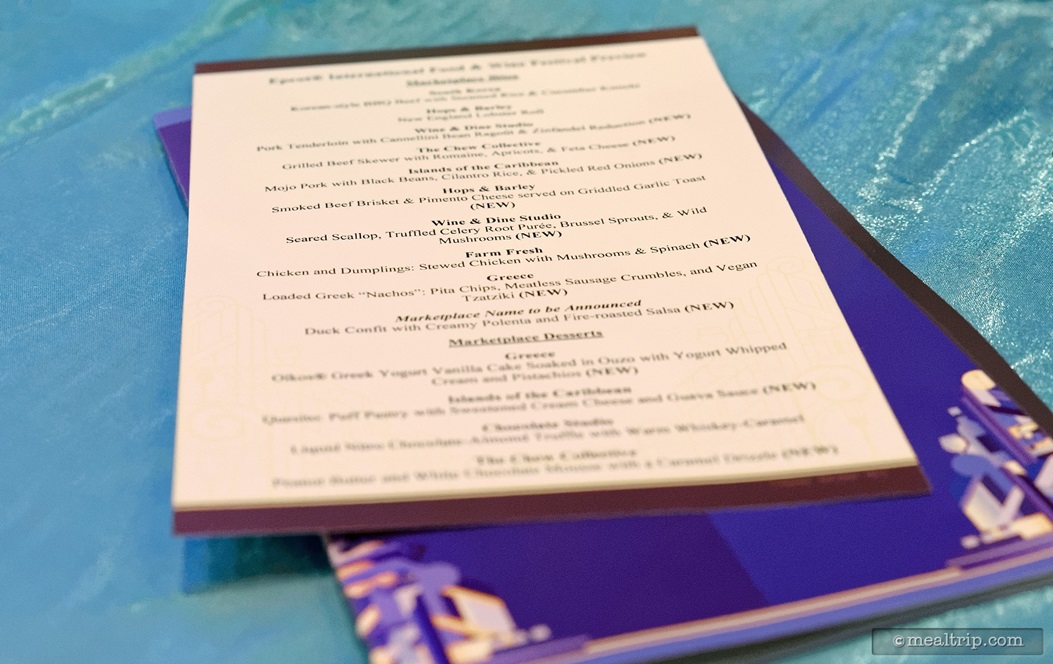 The list of food and beverages available at the 2016 TiW Preview Lunch. Under the list (purple booklet), is an itinerary for all the special events for the 2016 Food and Wine Festival. 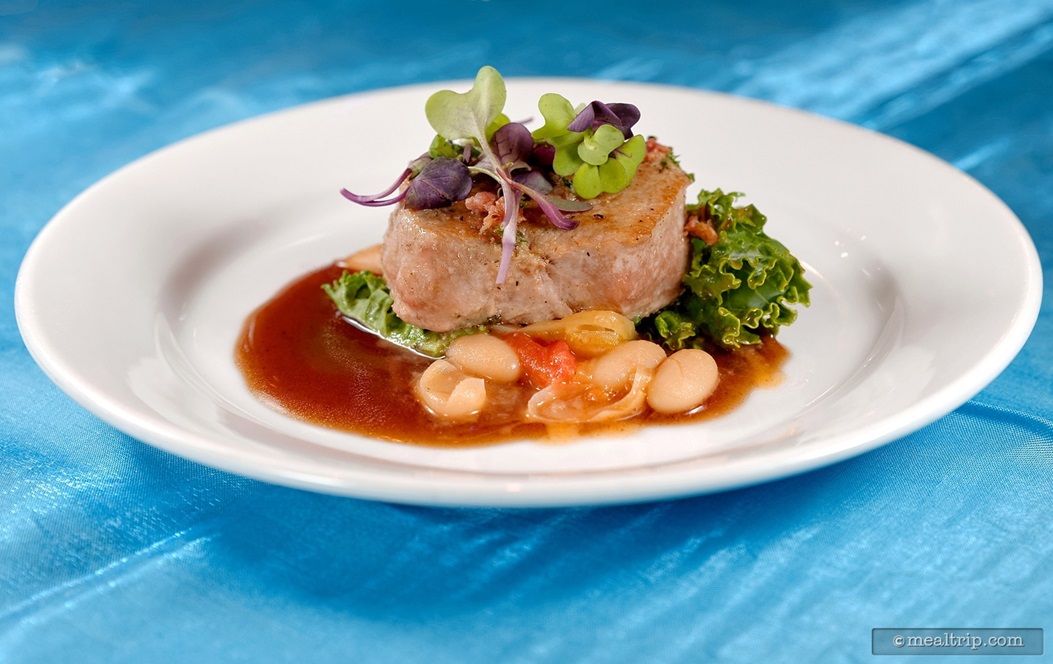 The new "Pork Tenderloin" item from the new-ish Wine & Dine Studio kiosk had a great flavor and was actually quite tender. You really can't go wrong with cooking just about anything with wine. This was one of the first items that I picked up, and the pork tenderloin was perfectly cooked. It was a decent sized medallion, for a sample… but this dish is going to be won or lost on how long the pork is allowed to rest in the kiosk. The wine will help, but that little guy is going to be easy to overcook. 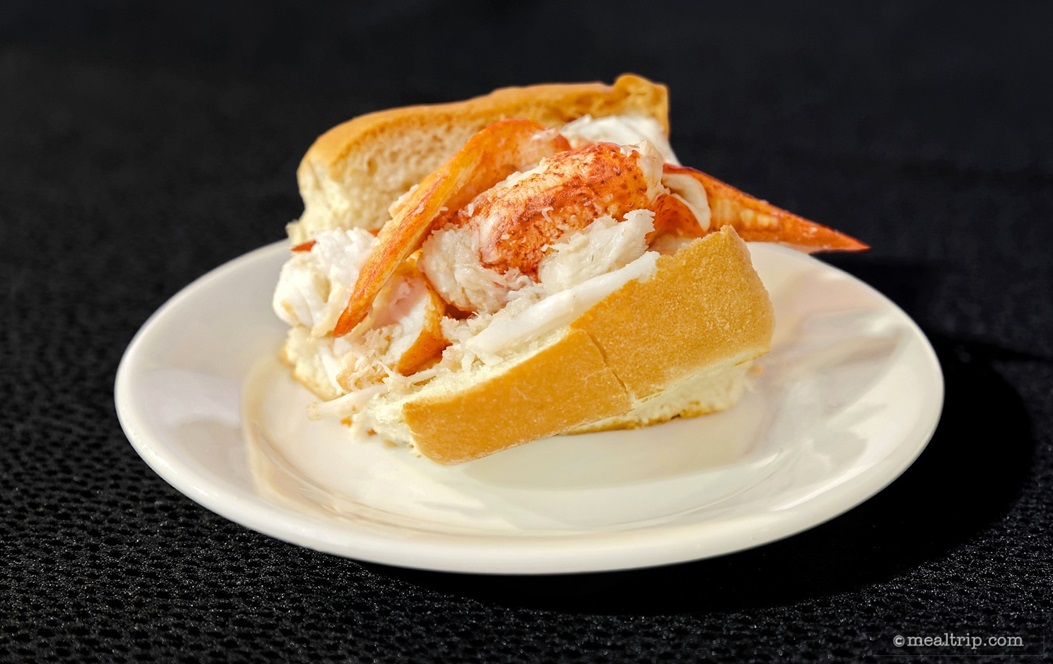 There's nothing new here per say, but look at that thing! It's the size of a half-a-hot-dog-bun and chocked full of lobster! It's traditionally one of the more (if not most) expensive items that you can purchase at the Global Marketplaces, but lobster is expensive… and it is really, really good… especially with a beer! 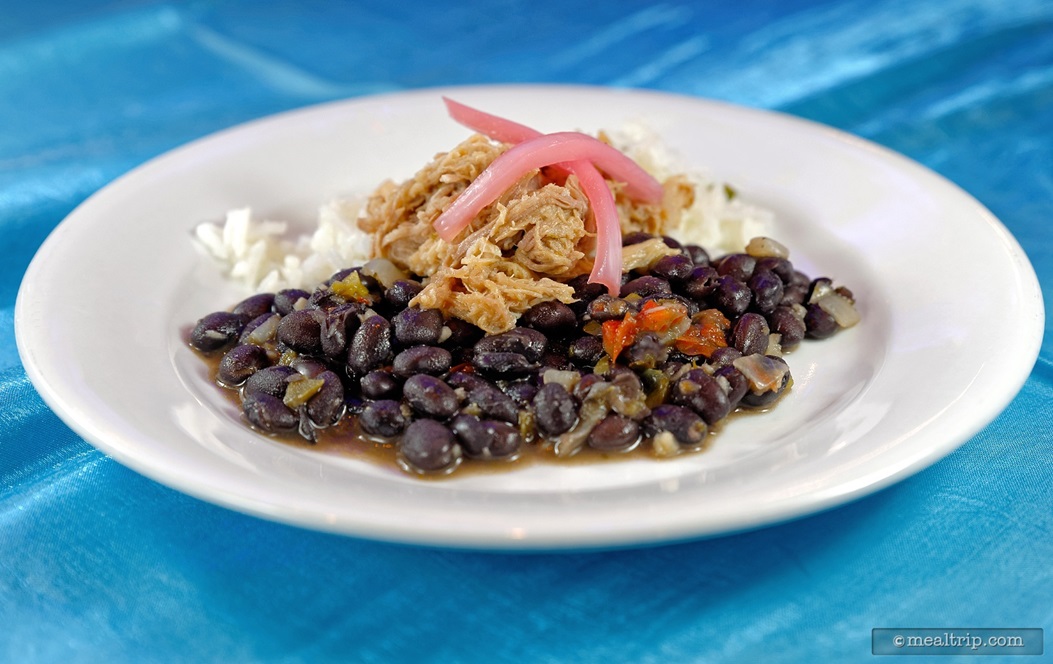 Mojo Pork is usually marinated in… spices, usually a lime… everyone has a different twist… but it's not really "spicy" in a hot sort of way. Even the cilantro rice in this one was very, very mild. I actually liked this one quite a bit. Once brought to the kiosk in the fall, it will probably be a decent value in terms of just how much "stuff" you'll  get (rice, beans, etc.) I would have liked a little more of the pork on this one. It had a great flavor and was super tender, but was placed on the plate as if it were a garnish. The actual garnish (the Pickled Red Onions) provided a nice, cool, vinegary cut to beans and rice. 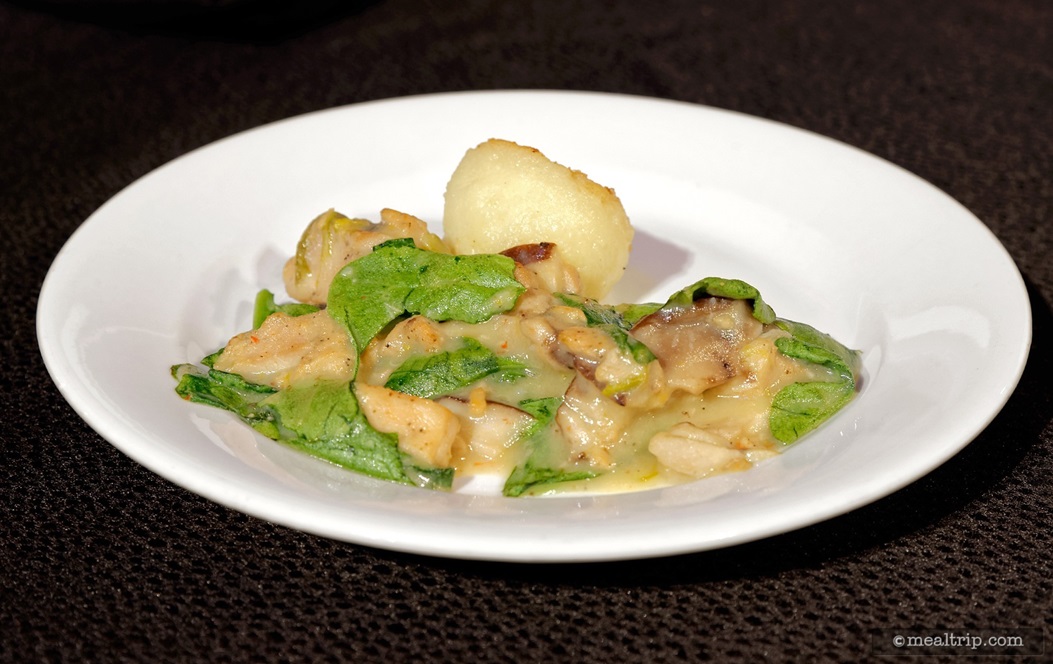 Okay, let's not beat around the bush… this one has a bit of an image problem… but it tasted great. Spinach wilts fast when hot, dumplings and mushrooms sauce goes south fast when allowed to cool. There's some challenges here. Still, I heard many guests say that this was their favorite dish of the lunch. I honestly think it comes down to getting a fresh, made to order portion… or one that had been under the heat lamp for too long. 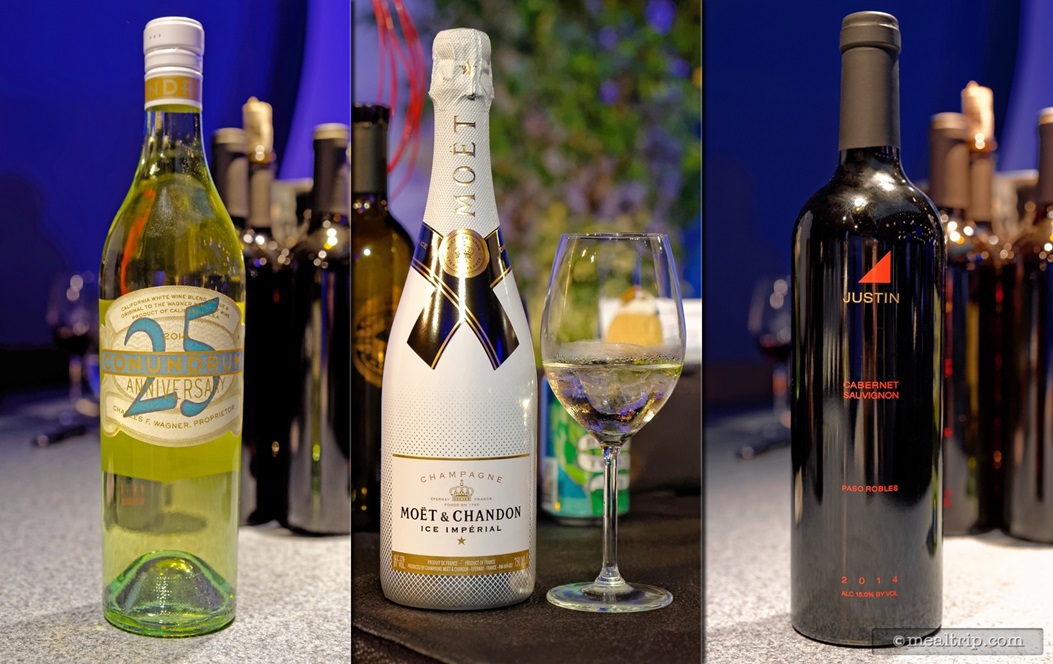 The real cool beverage here (pun intended) is the Moet Ice Imperial Champagne, served on ice, with a few leaves of fresh mint tossed in. If you've never tried Champagne on ice… it's amazing. I have never tried it with a few mint leaves floating on the top though… and that was surprisingly nice as well. The mint leaf doesn't really give you a "sweet candy mint" experience as much as it does a "peppery spice leaf" type of note. Extremely refreshing on a hot day, and would give any morning Mimosa a run for it's money. I would totally recommend getting one of these at the festival if you haven't tried Champagne over ice before. 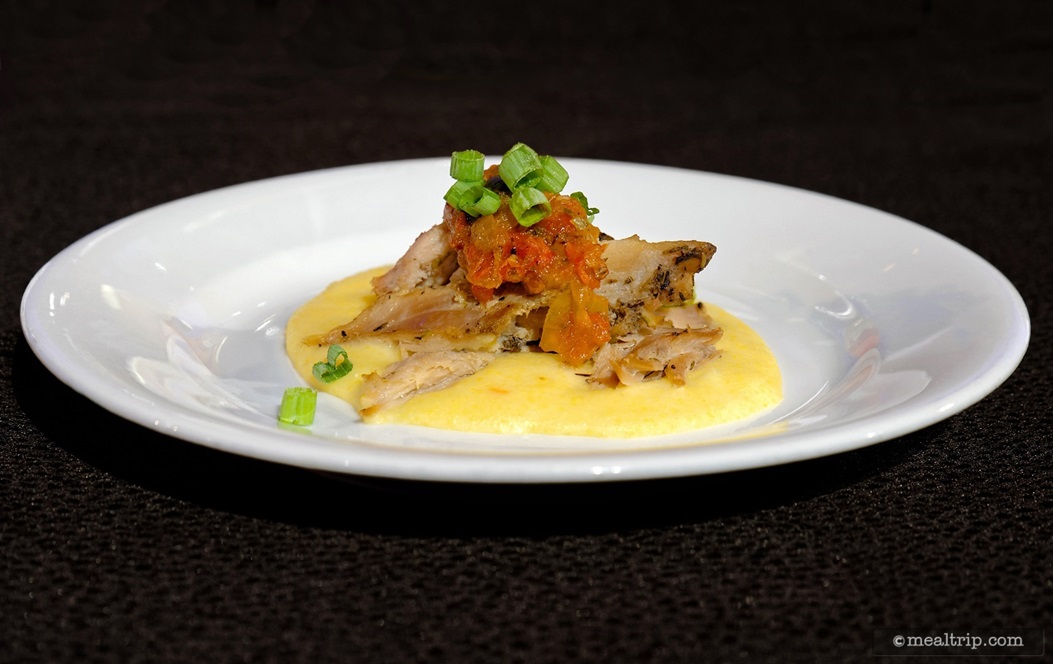 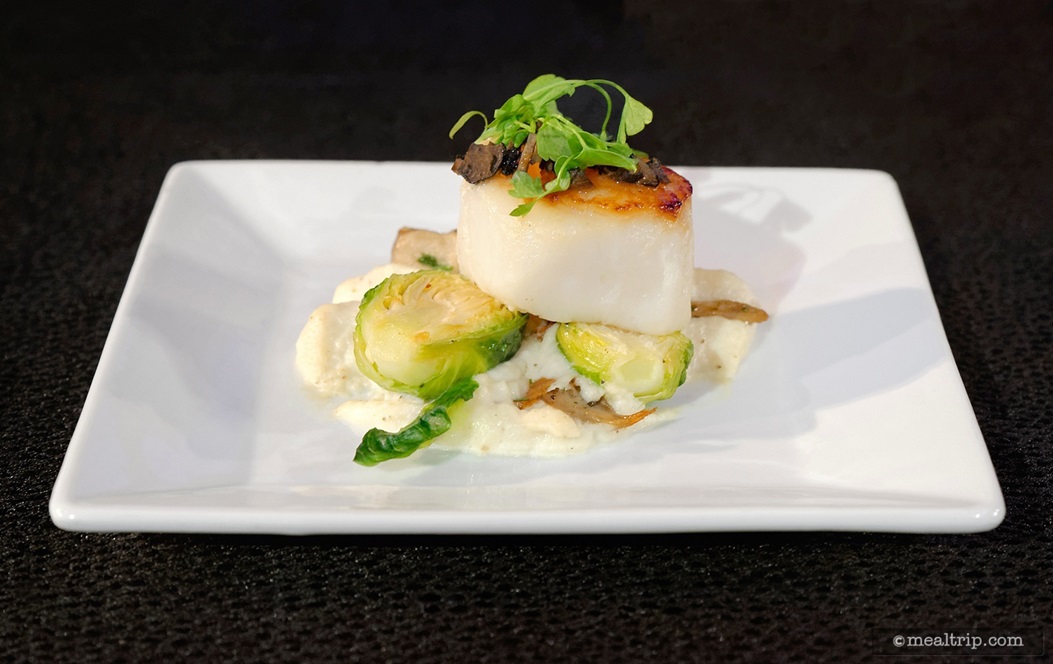 We've seen these medium sized scallops for a while now at Food and Wine, it's the accompaniments that keep changing. This new scallop from the Wine and Dine Studio was really good… if the word "truffle" wasn't in the description. There's not enough truffle in there to even call it a truffle bribe. That's not surprising because truffles are really expensive. If you don't know what a truffle tastes like now… you still won't know after eating this dish. But a good scallop just the same. 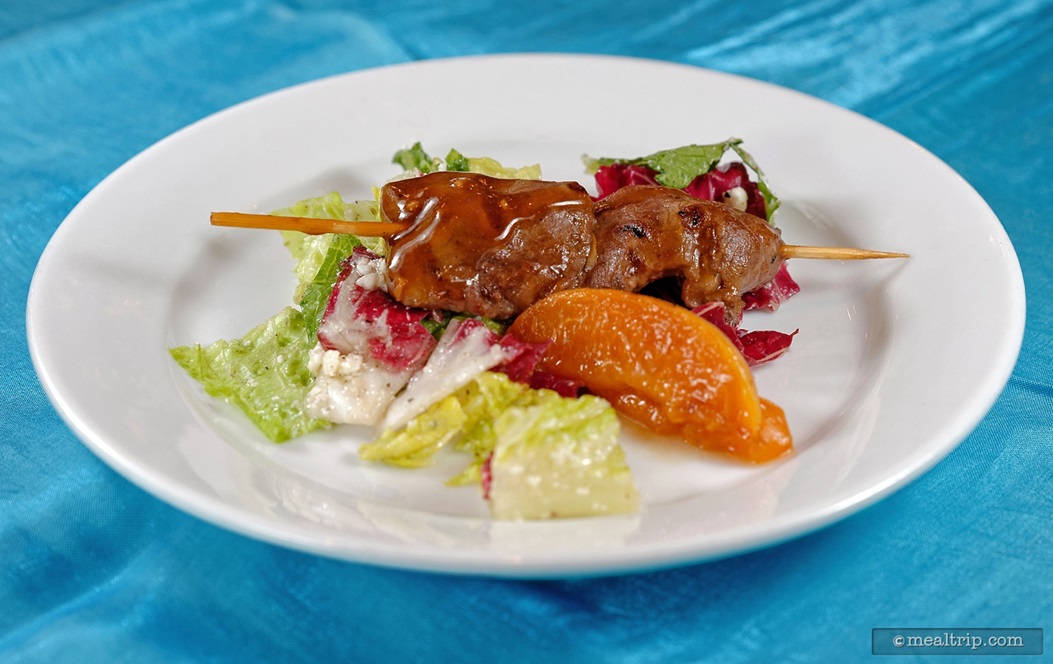 You know what… if I were to get two of these, toss them together, and call it a Beef and Apricot Salad… it would be a really creative new dish. As it stands right now, the Beef Skewers had a great flavor (although these aren't prime cuts... I'm just saying), the Apricot… tasted like an Apricot, and who doesn't love feta on salad? I'm just not sure what it is all together. A charcuteries plate that's spent a little too much time in New Jersey perhaps? I don't even know what that means. 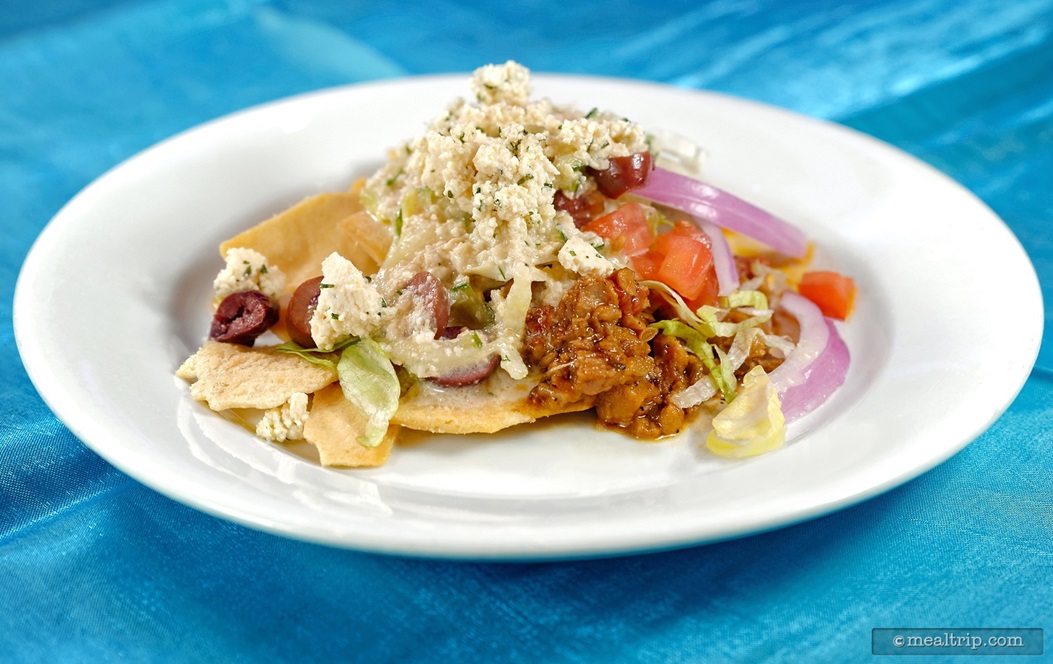 Okay, Greeks are all going "what?" … and it's meatless as well … normally, this is one of those things I would love to write some quick satirical comment for, but I'm going to let this one pass. Why? Because it's really, really good. I mean, seriously good. It has Greek components… sort of… and you'll totally be able to fool your friends by not telling them that the meat on the Nachos, is actually a Gardein, meat-free product. You really can't tell with this one. Perfectly spiced but with cool Tzatziki, it also has hot and cold, crunchy and smooth… three contrasts in one dish. A really great item (but not Greek). 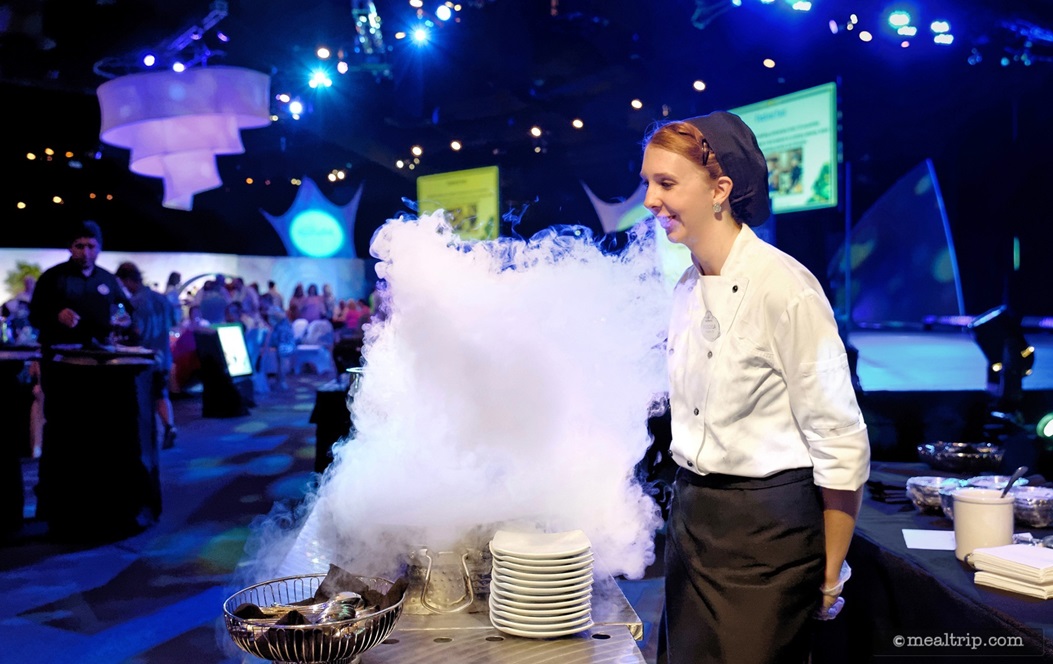 The popular Chocolate-Almond Truffle is returning to the 2016 Food and Wine Festival, but moves to the Chocolate Studio Kiosk. It's really cool seeing it being made right in front of you like this… I wish you could see more of the process at the actual kiosk. It's a big part of the experience. 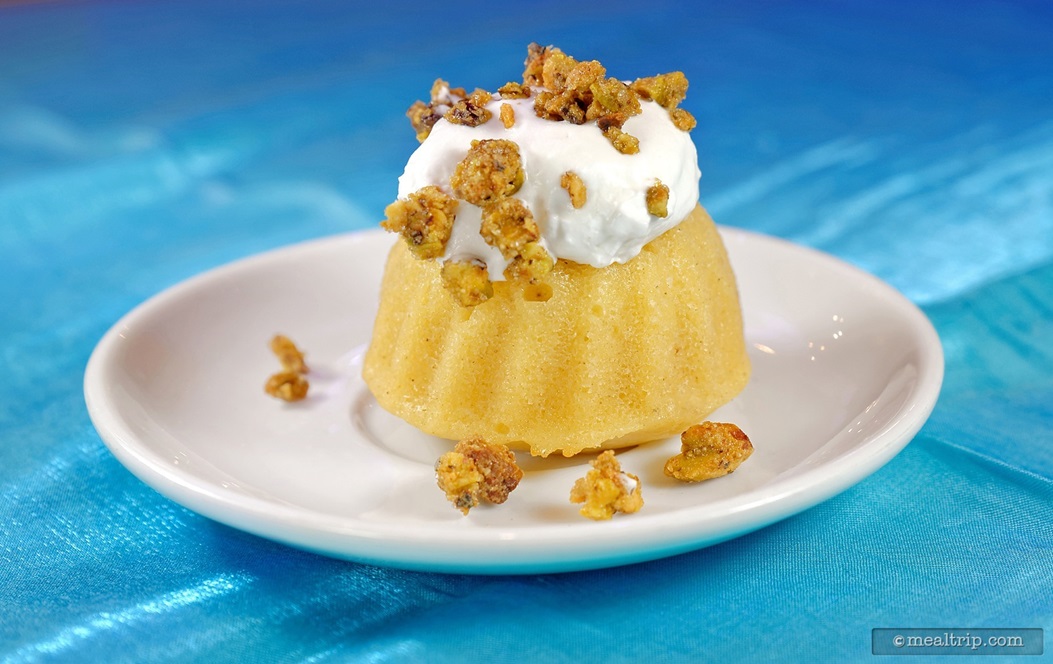 Oh the poor Greeks… they're still thinking to themselves "now what?" This was a nice, moist bunt cake, but sadly… probably my least favorite dessert of the afternoon. The Pistachios added a good crunch, and I'm really glad they were there, but didn't add much flavor. I don't know why really. Pistachios have a great flavor. These Pistachios, had no flavor. The Ouzo… let's just say that if they're selling Ouzo by the glass at the Greece kiosk this year, you'll need to dump most of the anise-flavoured aperitif over this cake before it starts getting close to the levels it needs to be at. That… is actually not a bad idea. I'm a big fan of wet cakes. Hummmm 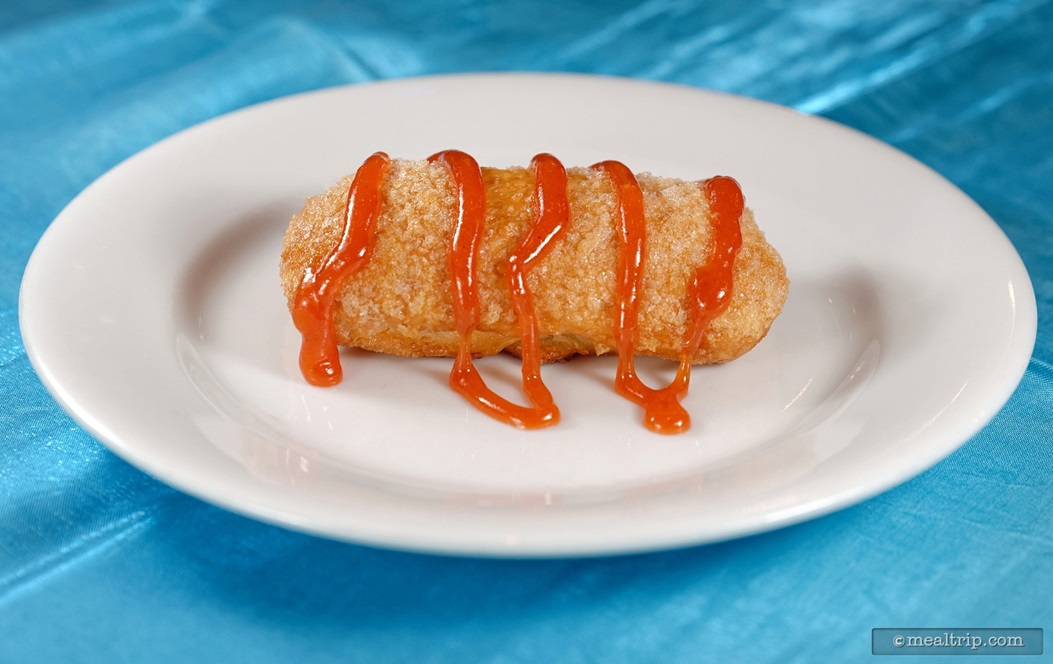 I have absolutely saved the best for last. This one, gets a "Must-Try" recommendation from me. Unless you absolutely dislike one of the ingredients, you're in for a treat. This not-too-sweet dessert has the big three contrasts that I'm always looking for… hot and cool, crunchy and smooth, sweet and a little savory. It is heavy for a dessert, but I wouldn't change that. It is, what it is. I totally hope this kiosk is placed next to a Joffrey's Coffee Kiosk… this Quesito and a Double Espresso would make for a great breakfast. Not great for you of course… I'm going to gain a pound every time I pass by the booth… but a totally great little not-super-sweet dessert.

Beverage-wise there did seem to be a good mix available, including two beers, two fruit wines from Florida Orange Groves Winery, a sparkling wine and a genuine Champaign, with wines rounding out the list, a Mondavi Red Blend, Mohua Sauvignon, Cambria Estate's Pinot Noir, and a couple of Chardonnays.

All in all a great event. When Tables in Wonderland first started the Food and Wine preview dinners... they were more formal, plated meals with passed small bites to begin with. This new "mini-party for the senses" format is a lot of fun, and encourages mingling… not with strangers, but with other Tables in Wonderland members who are just as interested in food and wine, as you are.

What we didn't talk about here (because frankly, it's going to be plastered all over the internet over the next couple of days) are all the special events that are part of the food and wine festival. I'll be adding all of those events to the Food and Wine page over the next couple of weeks, along with a few event reviews from last year that I haven't published yet.

An important date to remember is July 19th. That's when pre-booking for "some" events opens for Tables in Wonderland Members, DVC Members, Annual Passholders, and Golden Oak Residents. Shortly after that (usually July 21st), booking opens for every event and for everybody. It's important to remember those dates, because it's usually only a few days before that… that all of the "official" information is posted on the Epcot Food and Wine Festival page, directly on the Disney owned site. That page, can be found here…