March 16th, 2015
|  by Mealtrip
Reading takes too long... just show me the 7 photos from this article.
The inaugural Chef Demonstration at Epcot's Port of Call gift shop was met with a very blustery day. The kind of day that you can only find in the Hundred Acre Wood. There's no telling if that drew guests into the small gift shop space, or kept guests away from the park that day, but there were around 50 audience members milling about during the demo, which to me, seemed just about right. You could pack more in of course, but might have spoiled the pensive vibe that you can find within the confines of blustery days, sheltered places, and culinary demos.

The Port of Call gift shop is on the right-hand side as you enter the World Showcase area.

This was more of a "mixing demo" of course, because there's no space in the gift shop to actually bake anything. 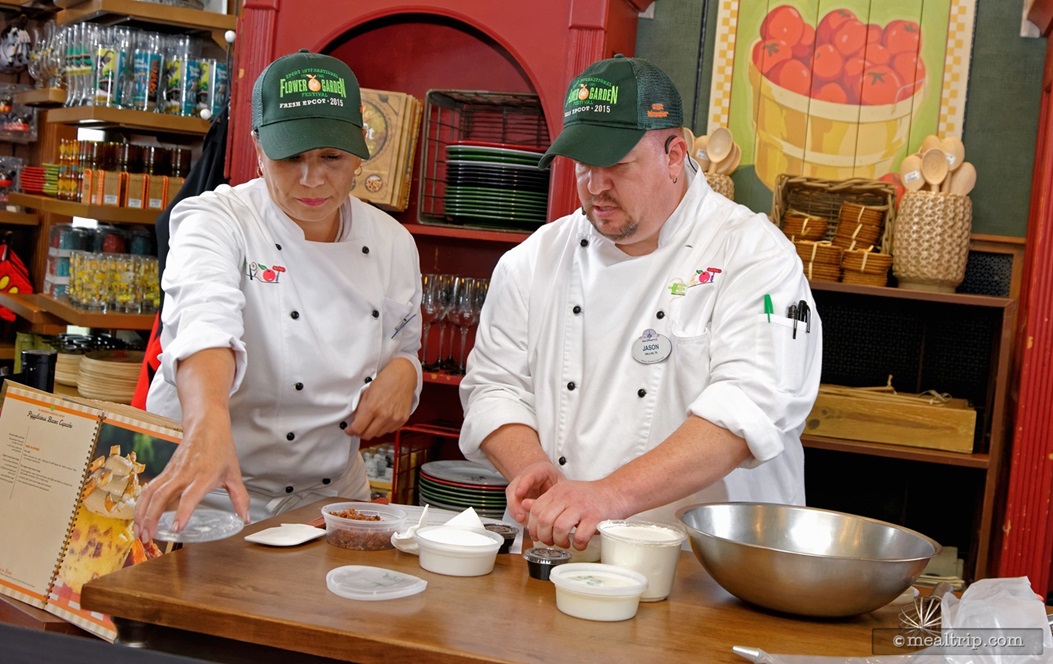 Setting up for the Chef Cook Demo in the Port of Call gift shop at Epcot's International Flower and Garden Festival.

The format, was quick and easy… we would be watching the making of the festival's "Piggylicious" Bacon Cupcake with Maple Frosting and Pretzel Crunch. 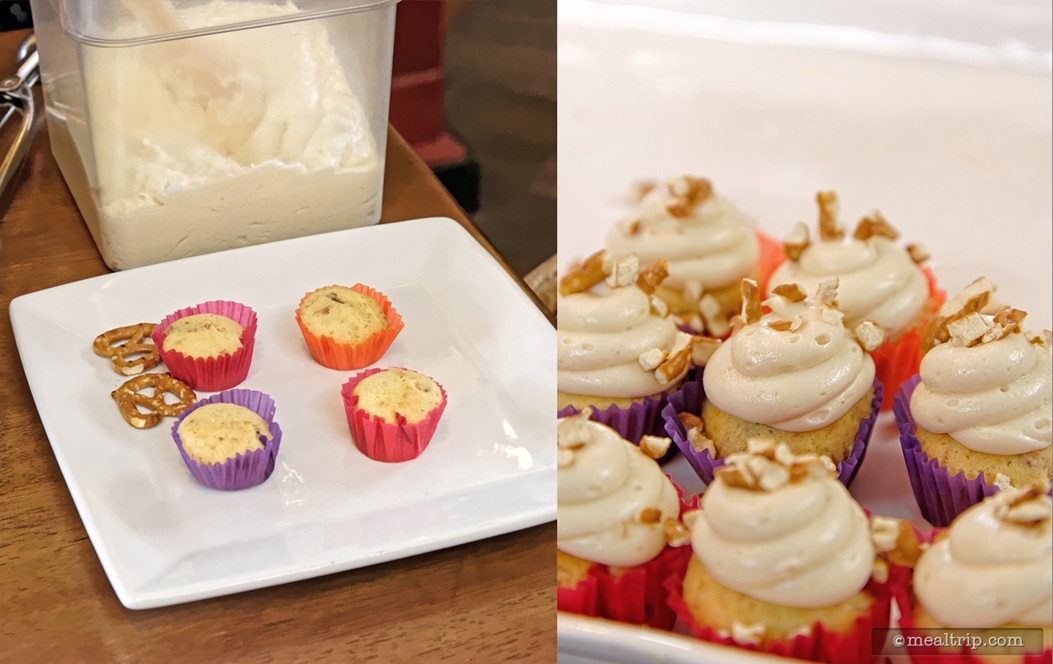 The pre-measured ingredients were all set out on the presentation table and mixed into a bowl by Chef Jason, with bits of information tossed in the mix. 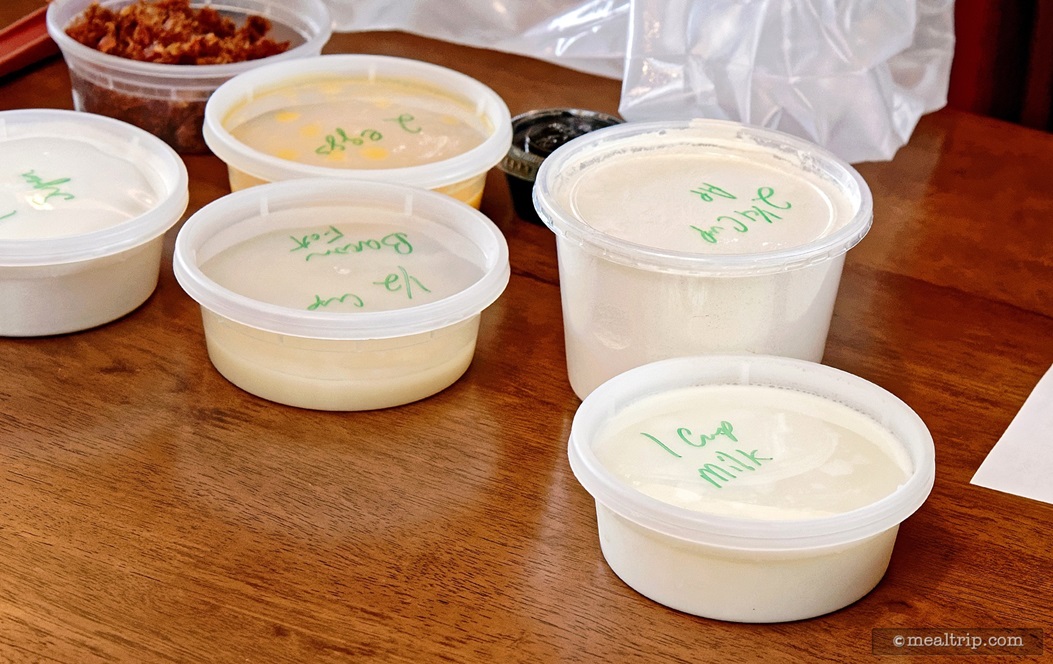 Pre-measured ingredients all set up for the cooking demo.

Questions about anything that was going on were encouraged, and we were all handed a copy of the recipe so we could make the cupcake at home.

Chef Jason also mixed the maple frosting for the cupcake from scratch, and placed all the icing in a piping bag. 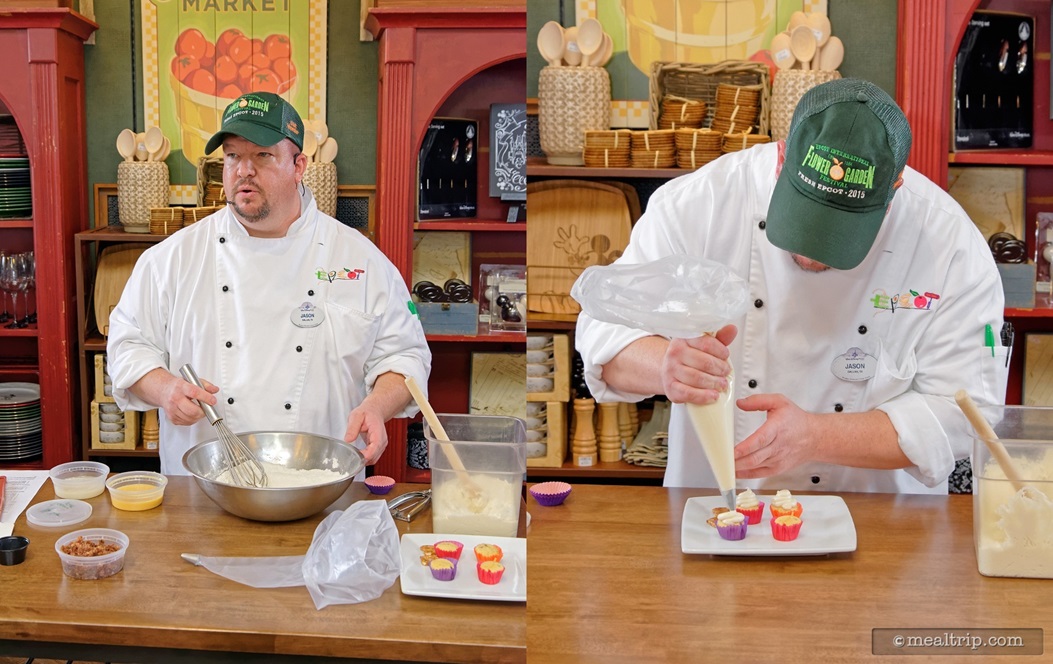 Just watching the care for which the frosting was being piped on top of each pre-made mini-cupcake was intriguing, but a slight murmur in the crowd off to my right, told me something else was going on. Sure enough, mini-Piggylicious Bacon Cupcake with Maple Frosting and Pretzel Crunch were being handed out to the audience, so that we could sample the indulgent pastry. There were possibly six dozen mini-cupcakes in all, so getting a free sample on any given day... is going to depend on how crowded the demonstration is. 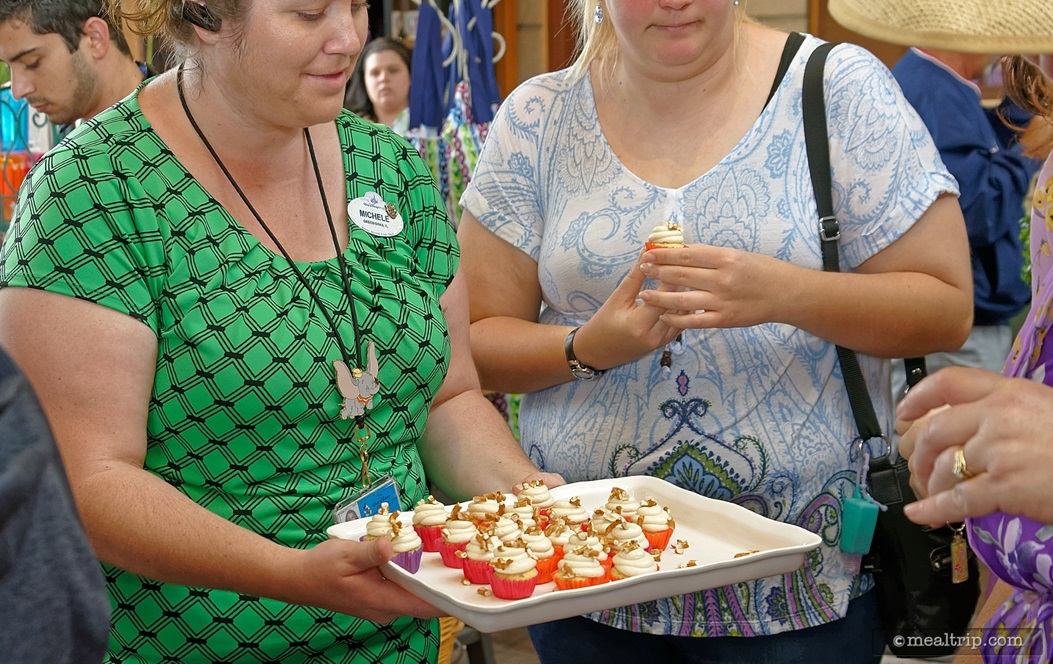 I actually really liked the format and the pacing of the demo. It is in a gift shop after all, and while I realize the whole idea is to help market the cookbook for which the recipes are part of, that point wasn't driven home in a hard sell. The beautiful recipe book was on a stand on both sides of the demo. It's role as a bookend to the main event seemed to be enough, as several people were looking through the cookbook after the demo. 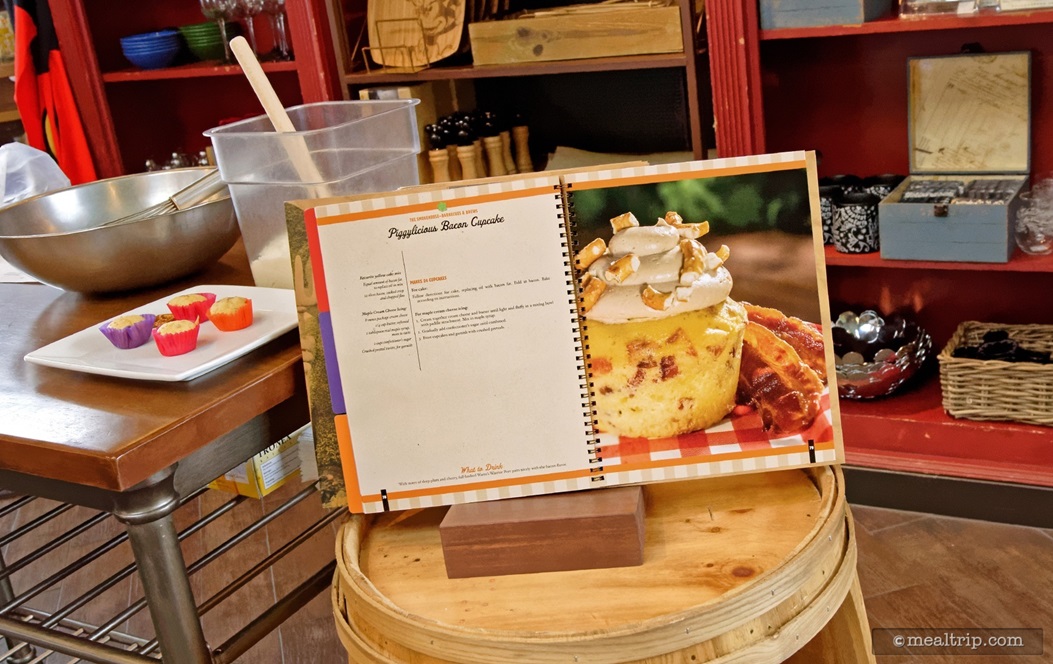 The festival cookbook turned to the page of the item being demonstrated.

What did strike me though, was a particular early 20-something gentleman, who not only asked to briefly stand in front of me during the demo to take a photo... but then actually stuck around after the demo had ended, to ask the Chef questions about baking.

Not wanting to dive too far into altruism over a simple cooking demo, but this one whit of interest, is at the very heart and nature of what Epcot should be about. A random spark and discovery with regard to science, culture and even culinary arts… not derived from a major attraction, but gleaned from the simple act of randomly passing though a gift shop.

I want to believe this will continue on each and every day of the demonstration, but I fear the true problem with Free Piggylicious Cupcakes will rear it's ugly head. The 50 or so guests who were watching the demo on it's first day, were there, because they were interested and engaged by the thought of learning something about how one of the Outdoor Kitchen items is created.

Once word gets out that there are free cupcake samples, audience numbers may spike. Not by those with a genuine interest in the culinary arts, but by guests who's fancy is delighted by the thought of getting something free from Disney.

If shear numbers were to have kept even that one 20-something gentleman from coming forward to ask questions, or to have even been drawn to the event in the first place... would in my eyes... take Epcot one step closer to being just an amusement park, and that little bit further from being the rich environment that was envisioned when we were first introduced to Epcot 1966.

The demonstrations are taking place at 3pm each Friday, Saturday, and Sunday during the Flower and Garden Festival (March 04 - May 17, 2015). They are being held inside the Port of Call gift shop, which is the permanent "brick and mortar" store located directly across from the Pineapple Promenade food kiosk.

Have you been to one of the Cooking Demonstrations inside the Port of Call gift shop? Let us know what you thought about your experience, and which item you saw being demonstrated.
next post
Farewell Tomorrowland Terrace Fireworks Dessert Party... Hello Wishes Fireworks Dessert Party!
previous post
Epcot 2015 Flower and Garden Festival Menu Boards
return to top of page
Reading takes too long... just show me the 7 photos from this article.