What is a Culinary Demo at the Festival Center During Epcot's Food & Wine Festival?

July 9th, 2015
|  by Mealtrip
Reading takes too long... just show me the 22 photos from this article.
Disney has a knack for repeating things that are good. With that being said, the Culinary Demos have been a part of Epcot's Food and Wine Festival since it began in 1996. There have been some tweaks to the program here and there over the years, and they have all been for the better. Today, the demos combine culinary education and entertainment with a small food and wine pairing sample for each guest. 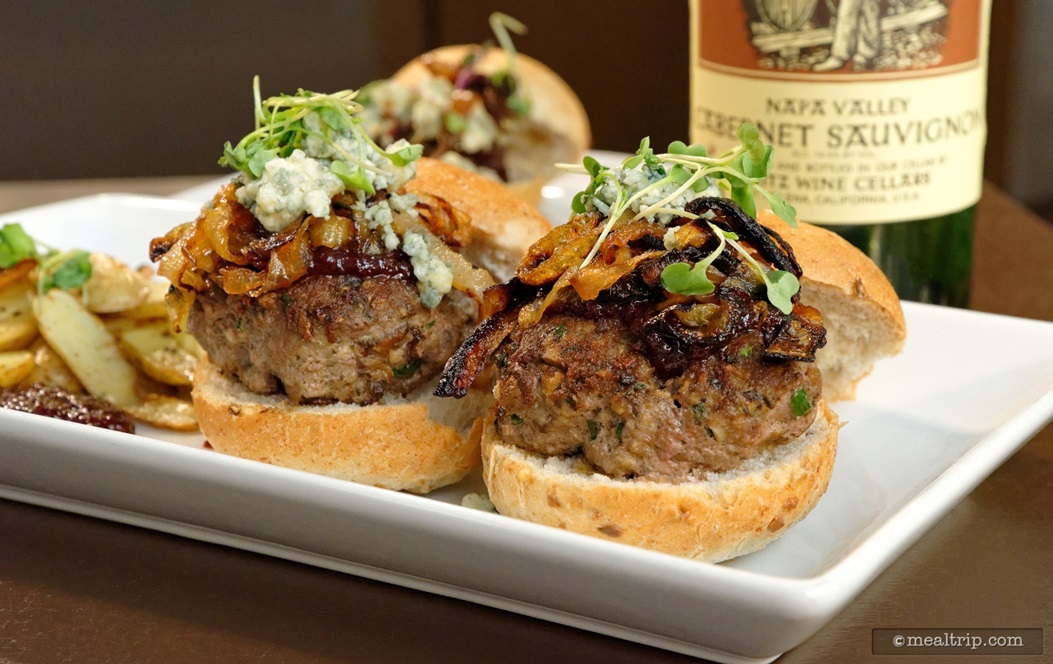 While the price has risen a bit from year to year, we still think they are a pretty good deal, and one of the lowest costing special events that you can attend during the Food and Wine Festival. 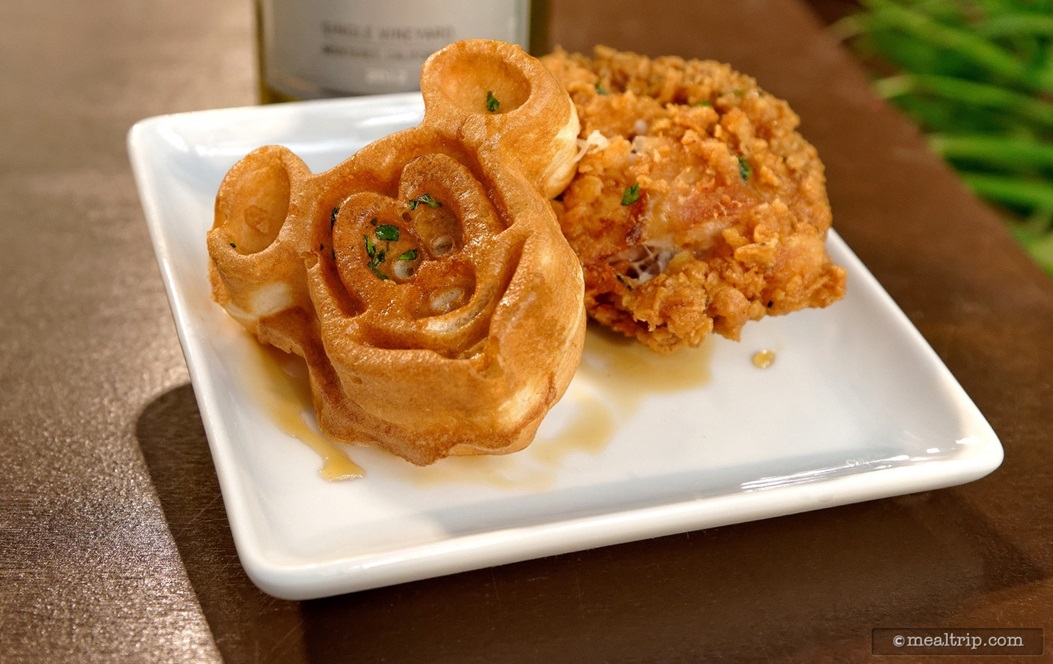 The Culinary Demos for 2015 will be held in Epcot's Festival Center (which used to be the Wonders of Life Pavilion in the front section of Epcot), they are about 45 minutes long and in recent years, have been held three times per day. We don't yet know the cost for attending one of these demos for 2015, but we expect them to be in the $13-$15 dollar per-person range. 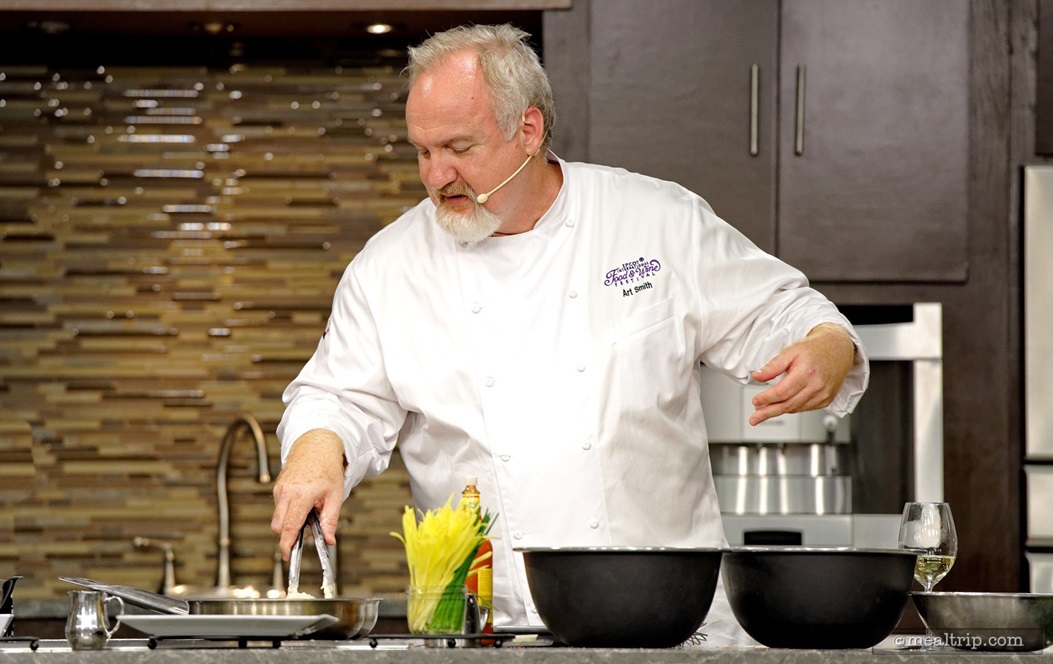 Chef Art Smith (chef/owner) from Table Fifty-Two in Chicago and Art and Soul Washington D.C. demonstrates the preparation of his infamous Chicken and Waffles. Chef Smith completed a culinary internship with the Walt Disney Company while attending Florida State University, and went on to become the chef for Florida Governor Bob Graham and the personal chef for Oprah Winfrey up until 2007.

Discounts are usually available for Tables in Wonderland and Disney Vacation Club Members, along with early booking privileges. Here again, we don't really "know" if that's the case this year, so be sure to check back with Mealtrip.com between the middle of July and August, when more information becomes available. 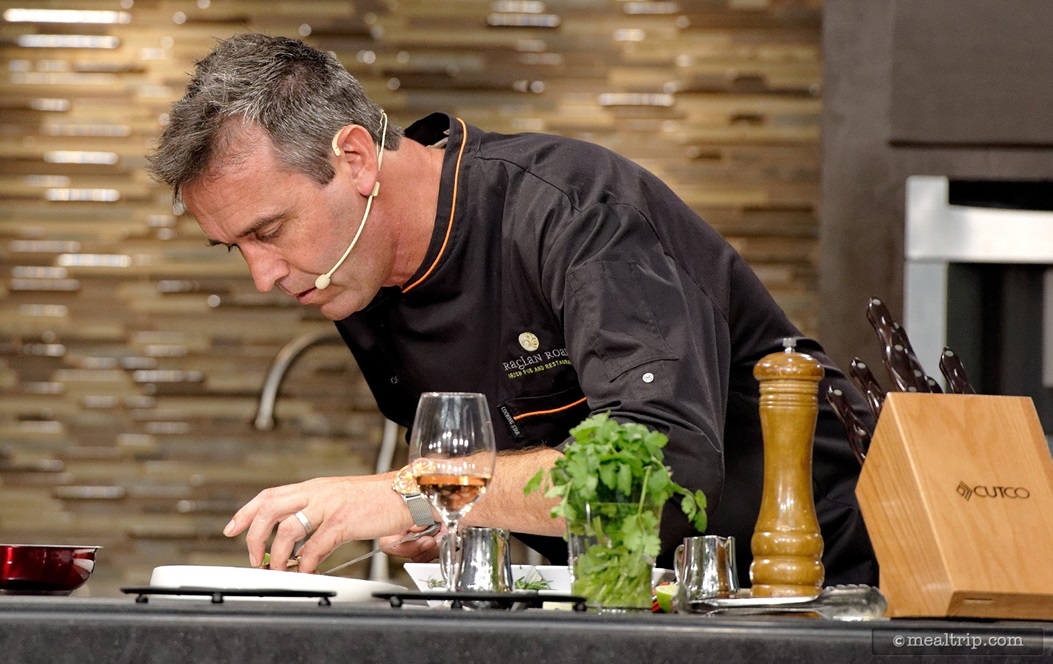 Everyone gets a seat, in an air conditioned building. That in and of itself is worth the price of admission on some of the busier days at the Food and Wine Festival, but wait… there's so much more!

For most of the Culinary Demos, your host and curator will be Pam Smith. It takes one heck of an amazing talent to help guide (and sometimes wrangle) over 100 different chefs through a 45 minute presentation. Pam Smith does so each year with an ease and grace that instantly make you, and the visiting chef, feel like family. 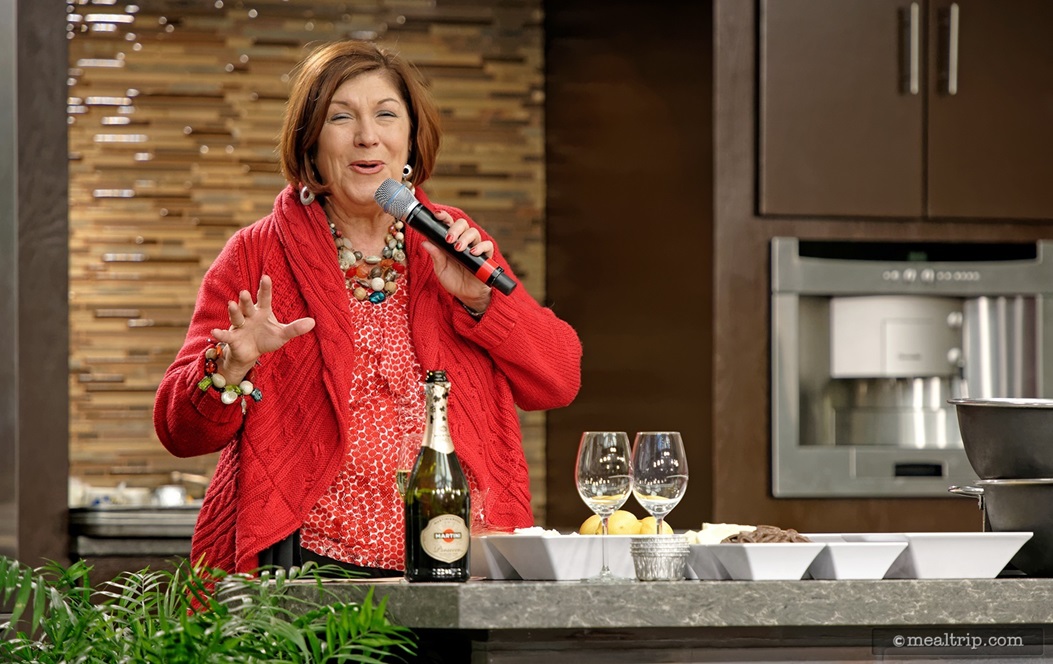 The first guest to be introduced is usually a representative from a vineyard, a particular winemaker, bottler, or distributor. We have seen a few beer and spirits representatives in the last few years as well, but more times than not, it's someone representing a wine. 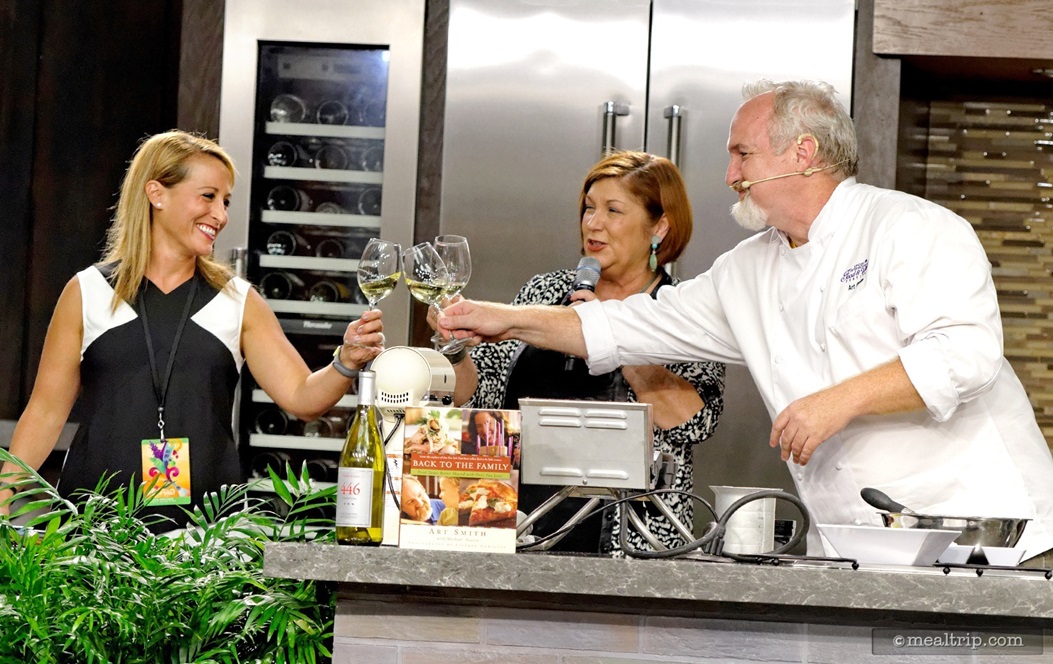 There are usually three people on stage for the Culinary Demos that are part of Epcot's Food and Wine Festival. Pam Smith (your host), the visiting chef, and a representative from a vineyard, a particular winemaker, bottler, or distributor.

For the next five or ten minutes the "adult beverage" guest speaker give a little background on the company and wine that they are representing. Fortunately, they don't come empty handed. Everyone above the legal drinking age (and yes, they will check your ID), gets a 4 oz.-ish sample of the wine, in an actual wine glass! 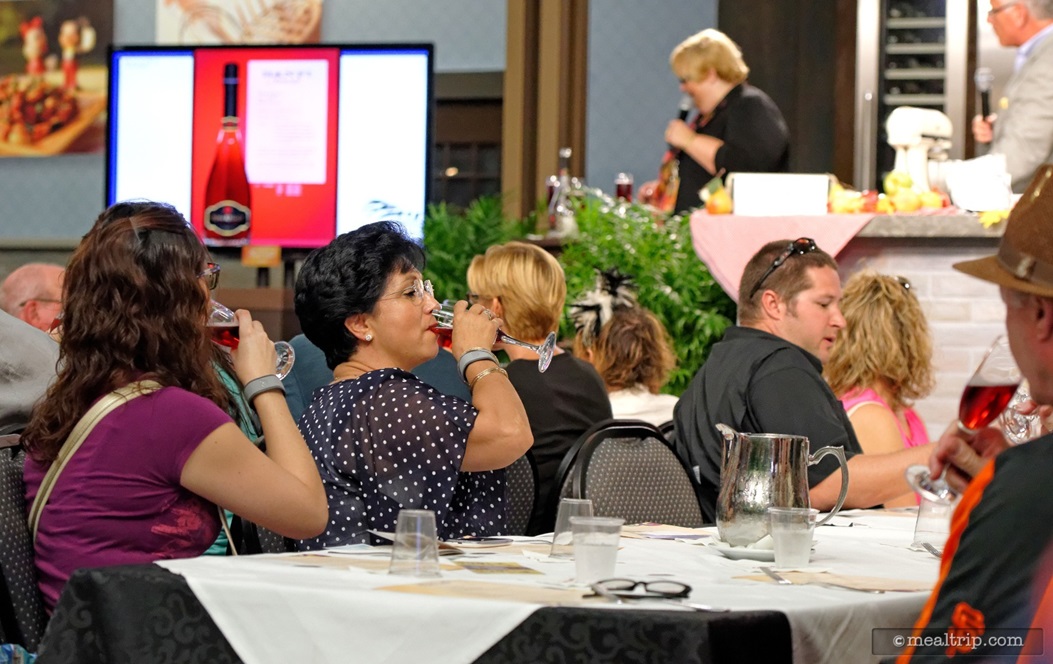 Everyone gets a sample of the wine or aperitif that the beverage representative is speaking about (soda and water are also available), but be sure to save some for the food pairing that happens next!

For those that are not "of age" or simply do not want a wine sample, there is ice water and cups on the table for everyone, and you can also request a soda or other available canned beverage. 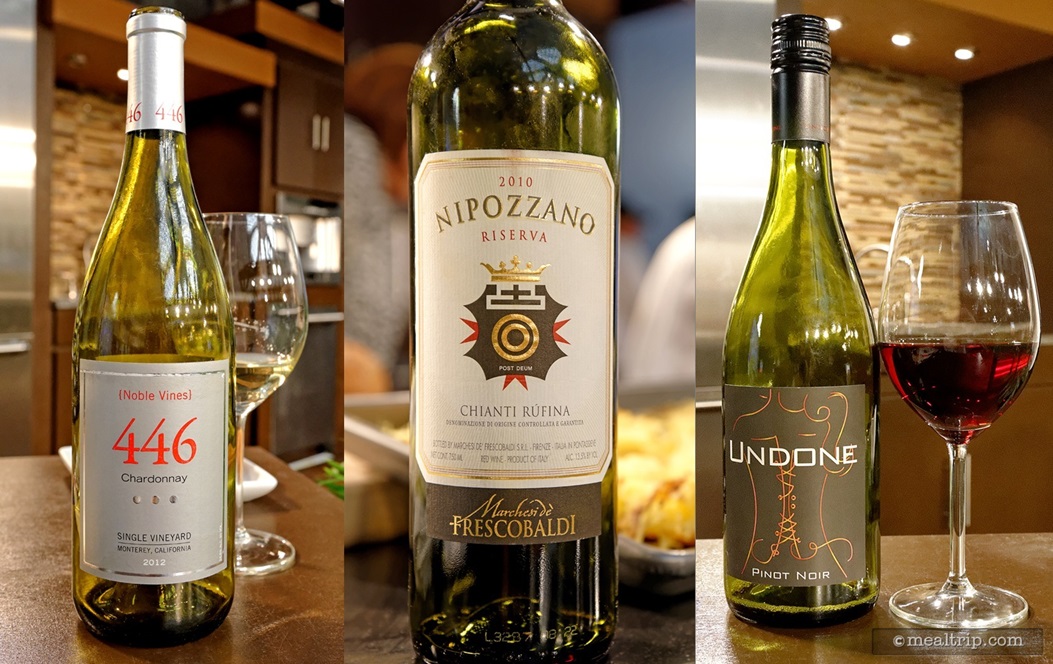 The wine samples vary with each culinary demo (we've seen a few beers and aperitifs such as Limoncello in there as well) . Here are just a few that we got to sample during the course of the festival. Noble Vines 446 Chardonnay, the 2010 Nipozzano Riserva Chianti, and Undone's Pinot Noir.

After the wine portion of the program has taken place, a guest chef is introduced. Everyone in attendance gets a recipe sheet with the guest chef's name and title, the date of the presentation, the name of the wine that was sampled, and naturally all of the ingredients and cooking instructions for making the same dish that the chef will be demonstrating. 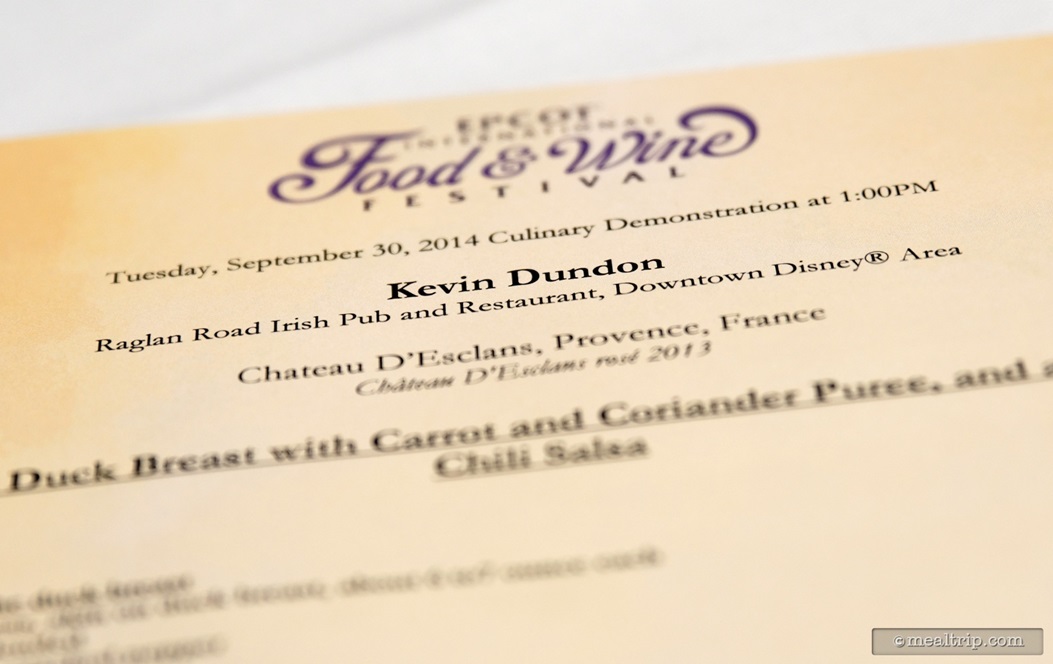 Each guest at the Culinary Demo gets a sheet with the chef's name, the date and time of the event, the name of dish they will be preparing, the wine or beverage pairing that will be served with the item, and a complete recipe for the dish the chef will be demonstrating.

This is where the program can differ a bit from chef to chef. Usually, the "weekend" chefs tend to be tv personalities. 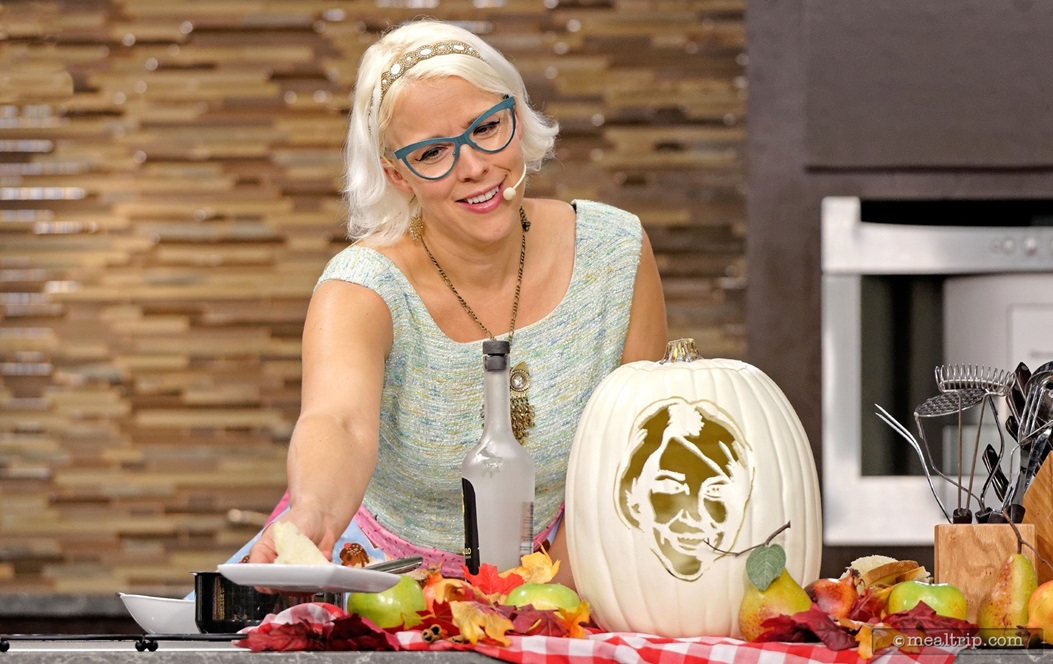 The weekday chefs might represent a brand, own a resutarunt, or even be a Disney chef from one of your favorite eateries! 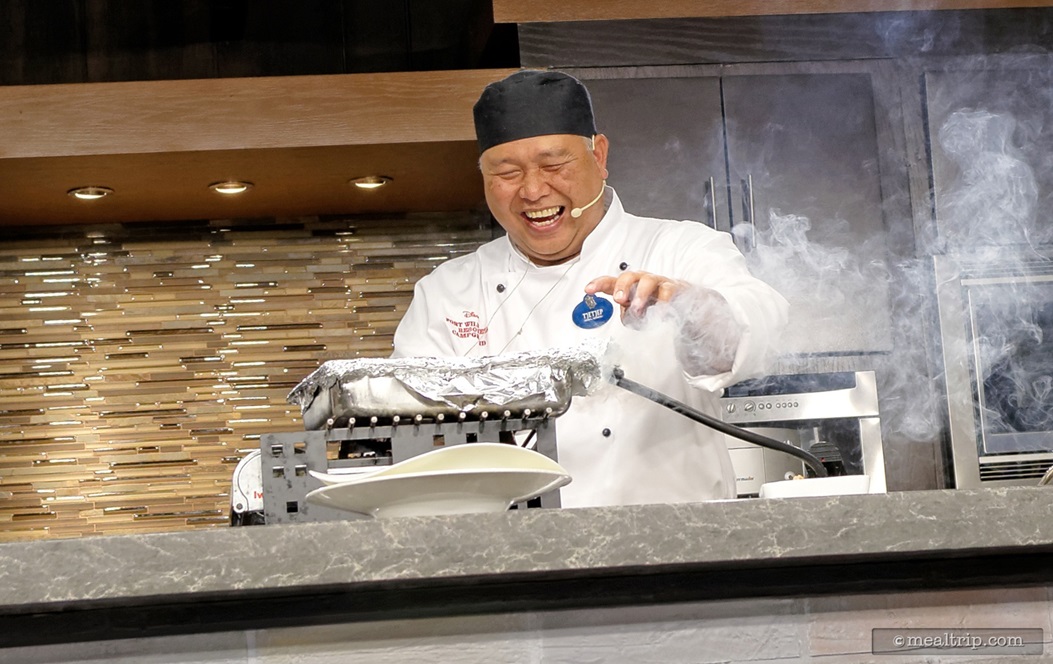 The more famous chefs tend to talk about the big picture while they are cooking, discussing lifestyle and how they got to where they are (a little bit like watching a segment on ABC's "The Chew"). 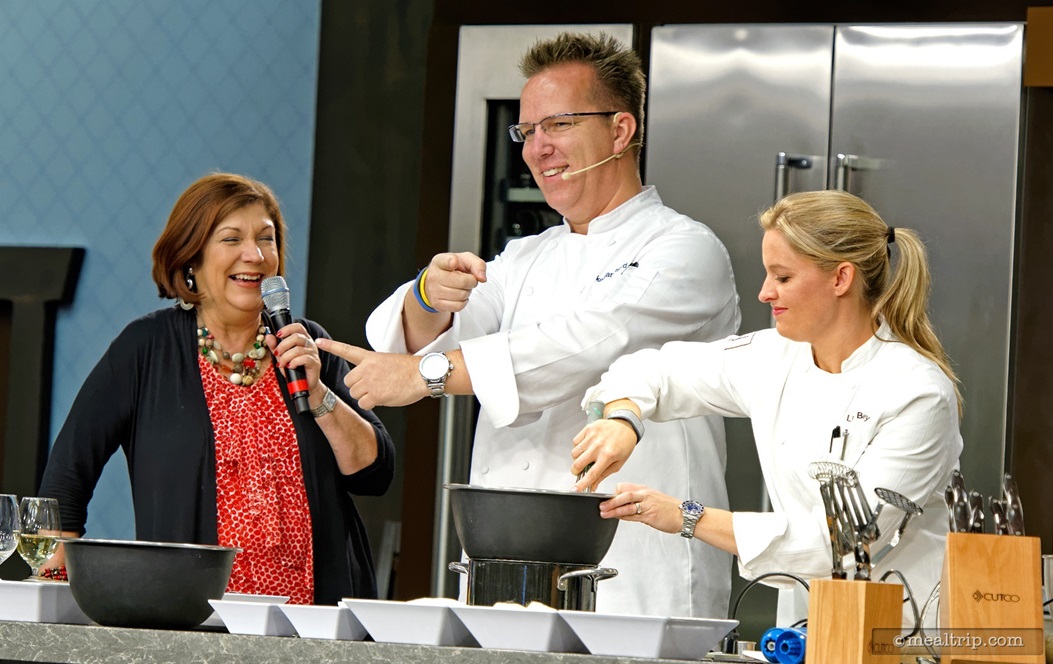 The weekday chefs generally discuss the actual dish they are cooking and give tips on food preparation along the way (a little bit more like a PBS cooking show, where you actually learn something about cooking). 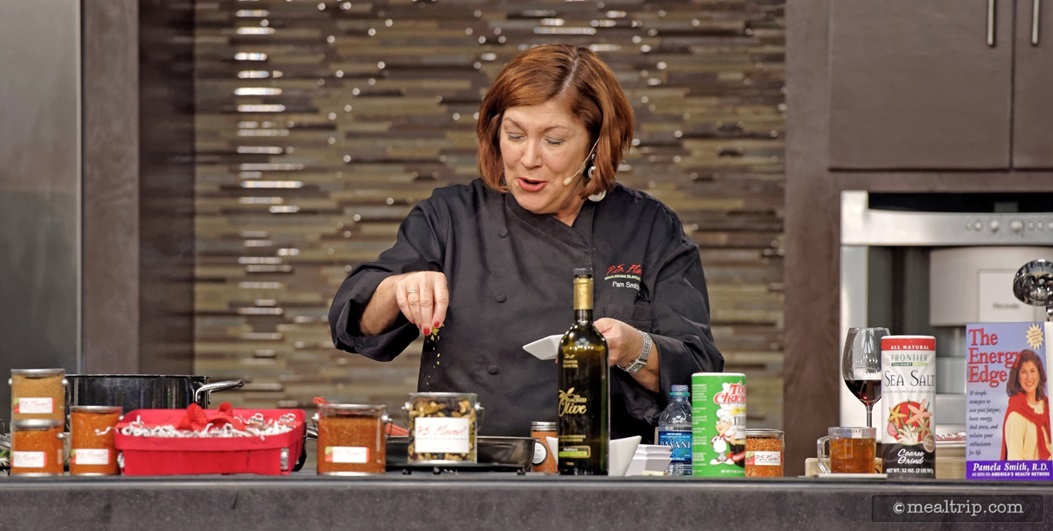 She's not "just" the host of the Culinary Demos! Internationally known nutritionist Pam Smith gets to cook a few times during the festival as well and always has interesting and useful tips for preparing dishes in your own kitchen. Pam is usually cooking with P.S. Flavor!, her own line of wholesome spice blends.

About half way through the presentation, stealthy event staff begin delivering small-plate sized portions of the dish that is being demonstrated to each of the 150+ guests that are in attendance! 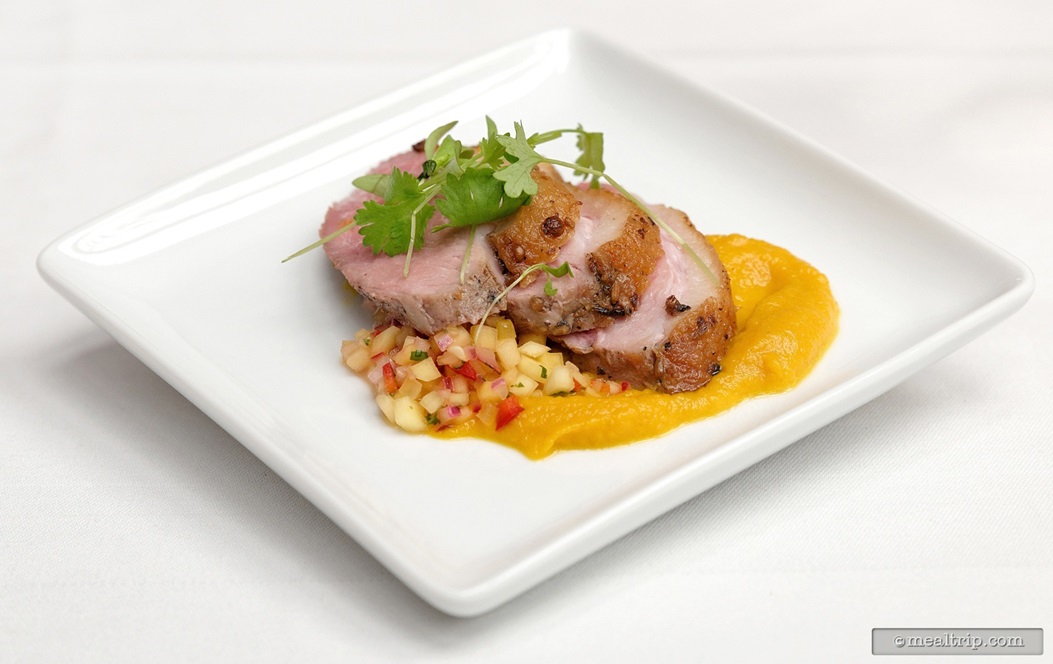 The portion sizes are considered "tapas style" but I know several guests that book two or three of these demos in a day, and call it lunch! Here, we see a close-up shot of Kevin Dundon's Spiced Duck with Carrot and Coriander Puree and Mango Chili Salsa.

It provides a great opportunity to pair the selected wine with the food being demonstrated to see how well they complement each other. (The pairings are not random either, so most actually do compliment one another. The food and wine for your event have been specifically selected weeks, if not months ahead of time.) 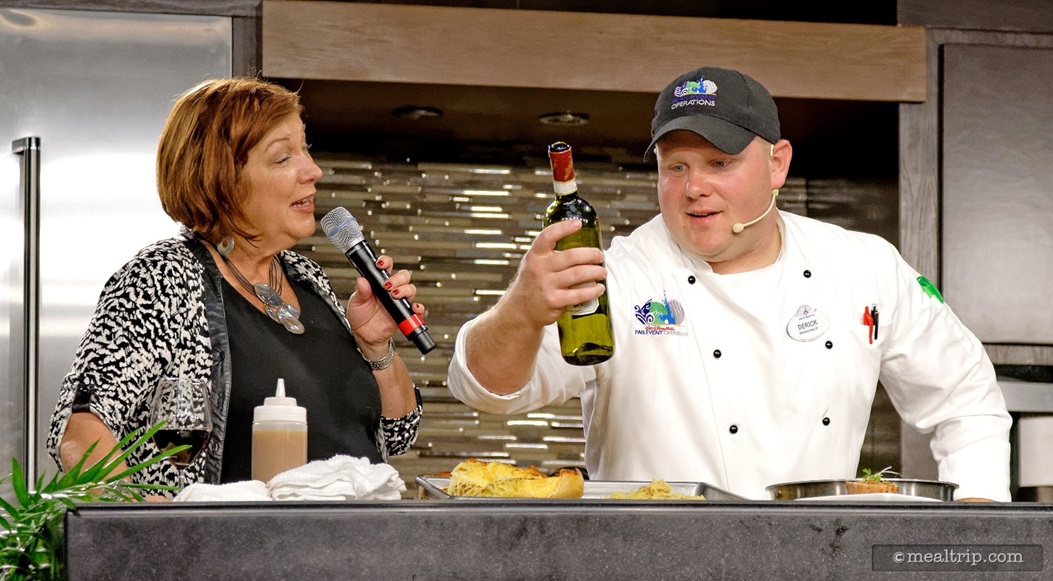 Disney Park Event Operations Chef Derrick Messenger takes a closer look at the Nipozzano Riserva Chianti that has been selected to be served with his Turkey and Apple-Walnut Stuffing with Spaghetti Squash Noodles, Roasted Pumpkin Seeds and "The Land" Grown Micro Greens.

Before you know it, the event draws to a close. More times than not, the chef and spirits representative will stick around for a few minutes to answer any questions. The more famous chefs generally go right to a book signing in the same building, and if you hurry, you can jump right over to that line, and have the chef sign your recipe sheet and pose for a photo! 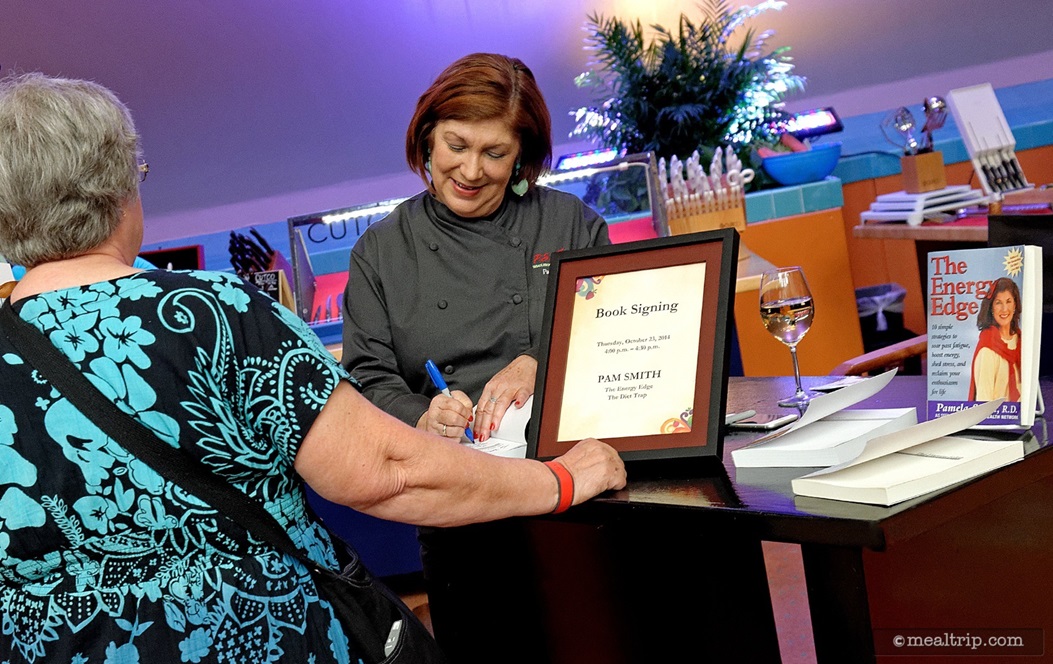 Most chefs from the Culinary Demos head over to the Book Signing area right after the demonstration, where you can grab a quick photo and get a little one-on-one time with your favorite chefs. Here, Pam Smith signs her book "The Energy Edge".

All in all, I really like these events. I have had the opportunity to go to food and wine festivals at different theme parks and surprisingly, the Culinary Demos are at the very foundation of what make the Epcot Food and Wine Festival so special. 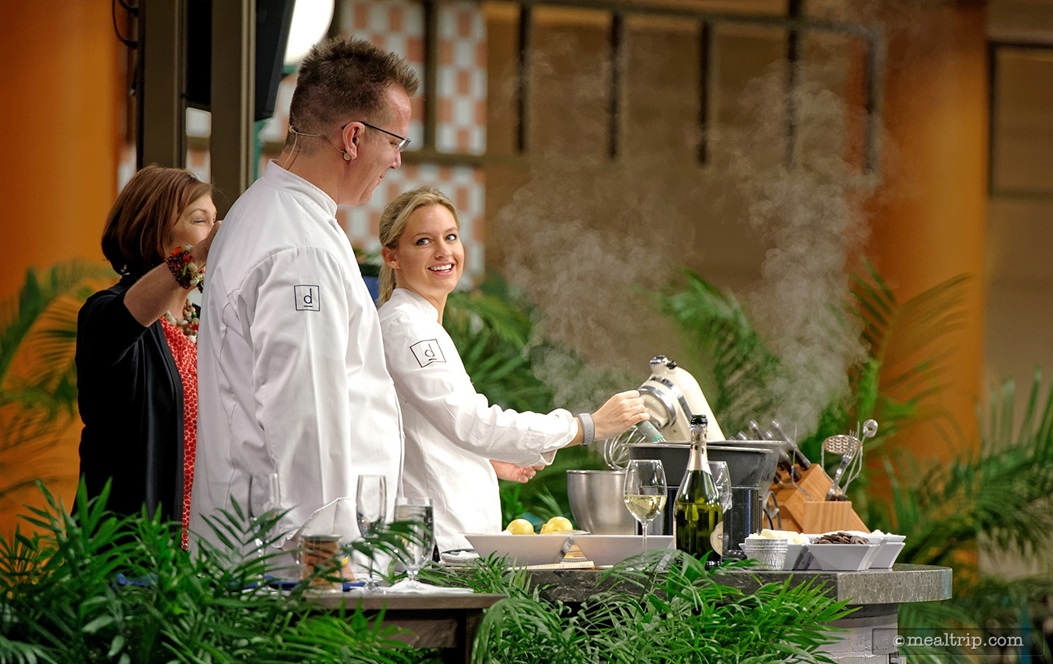 We all too often forget that "places" don't make food… people do. These simple Culinary Demo programs help to put the Culinary Arts back into the making of food, and remind us that there is more going on every time we take a bite of something, than just having to pick it off the plate. Skilled people had to go through the steps of creating and duplicating many actions, to get our food to taste the way it does. 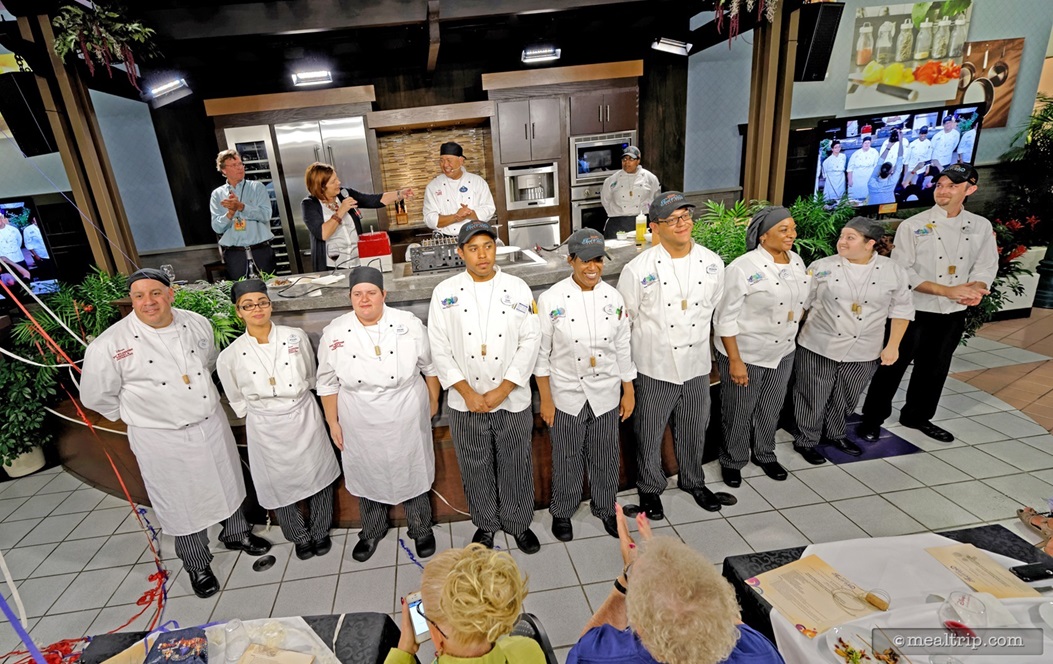 Just a few of the many amazing and creative culinary arts cast members that help make the Culinary Demos in the Festival Center possible.

The Culinary Demos give the beverages that we enjoy and the food that we eat... a face, and a timeline. Which is why it's one of those events at the Epcot Food and Wine Festival that I wish everyone would get a chance to experience. 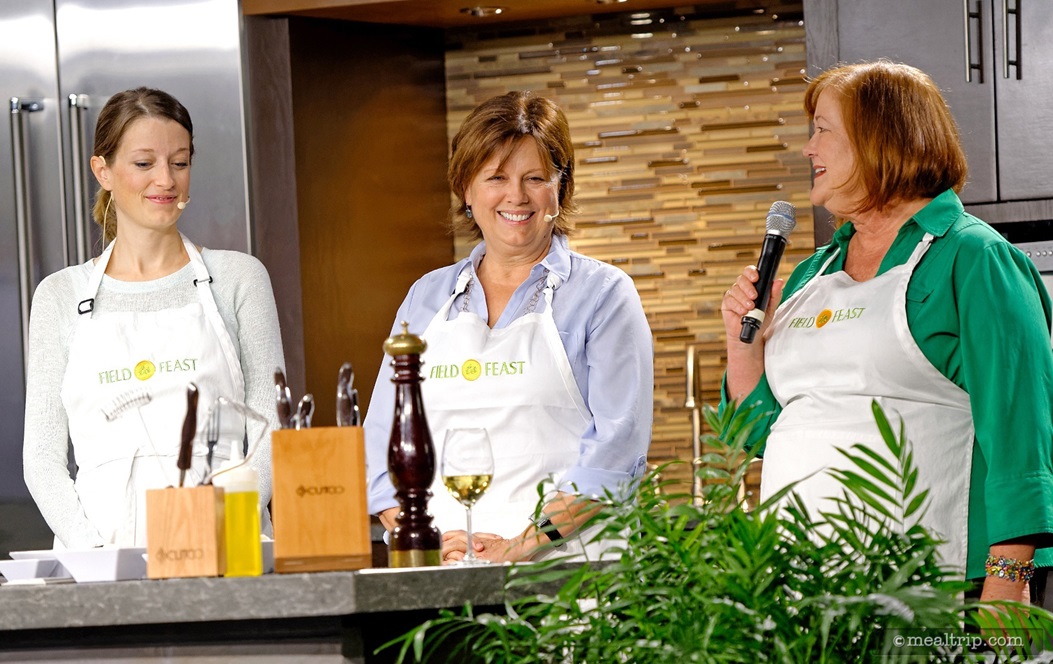 Going to one of these demos before hitting the food kiosk around World Showcase (the back part of Epcot) opens up whole new conversation possibilities for families and adult guests. Discussing what ingredients might be in any of the 60+ items that you could sample, how long it would take to prepare them, or how would you make it differently if you were cooking them at home? 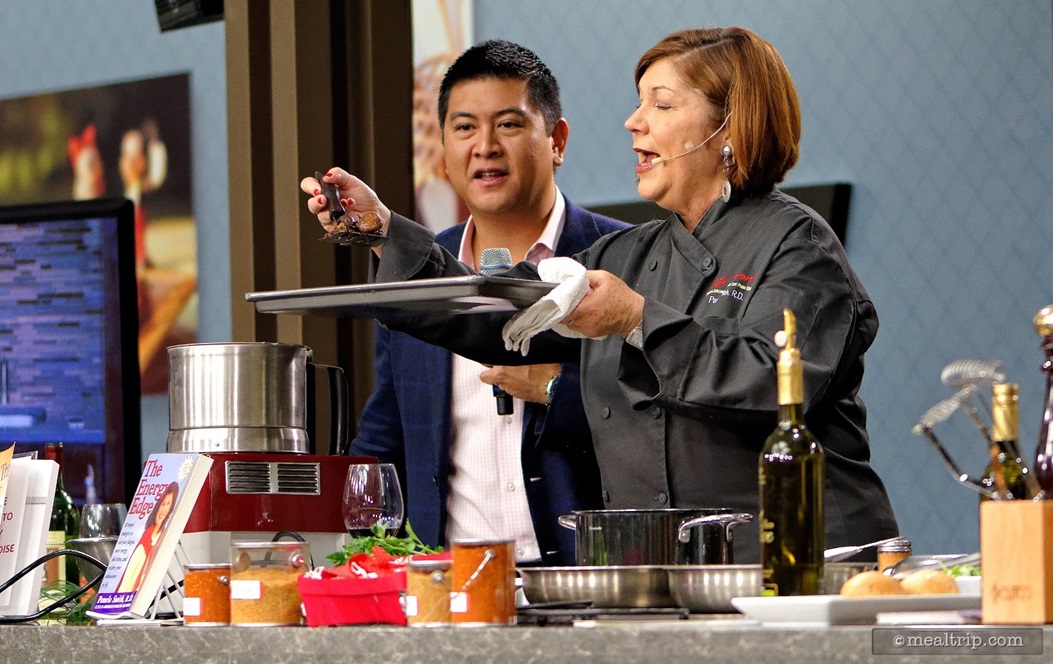 The Culinary Demo programs at Epcot can help spark conversation about the foods we eat every day, and how they are prepared.

Epcot was always intended to be a place of discovery, and the Culinary Demos are one of the best, low-cost special events during the Food and Wine Festival, that give guests an opportunity to do just that. 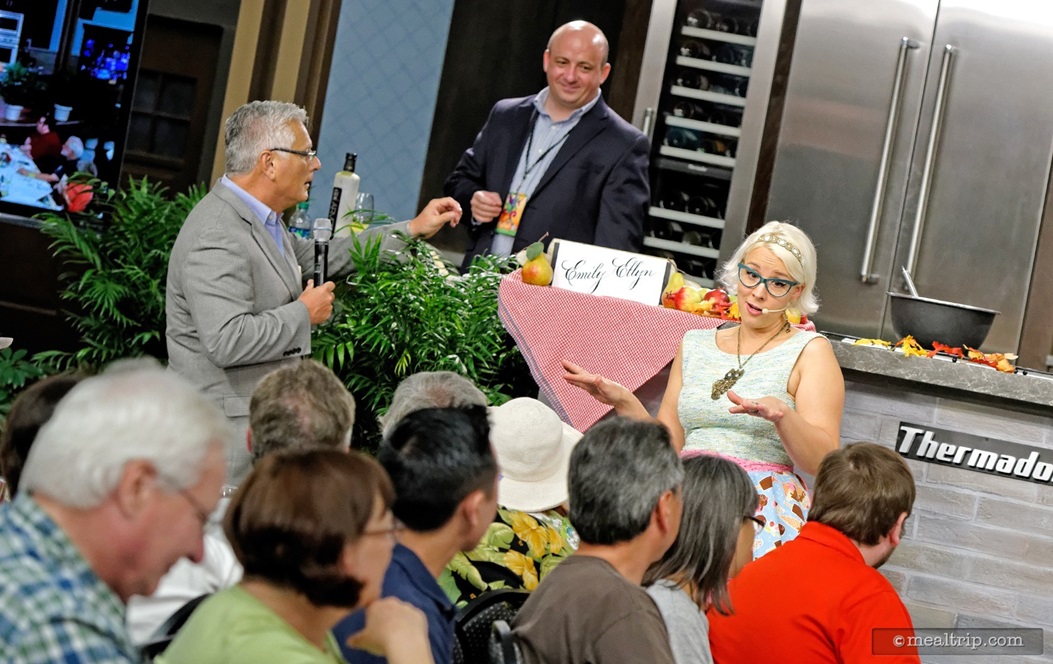 Emily Ellyn gets off the stage to visit with guests during an informal question and answer session.

Be sure to check back with our Epcot Food and Wine Festival page for chef names, dates, prices, and what protein or baked good the chef is scheduled to prepare. Information usually becomes available between July 15th and August 15th… popular weekend chefs do book-up fast (sometimes on the first day reservations open). 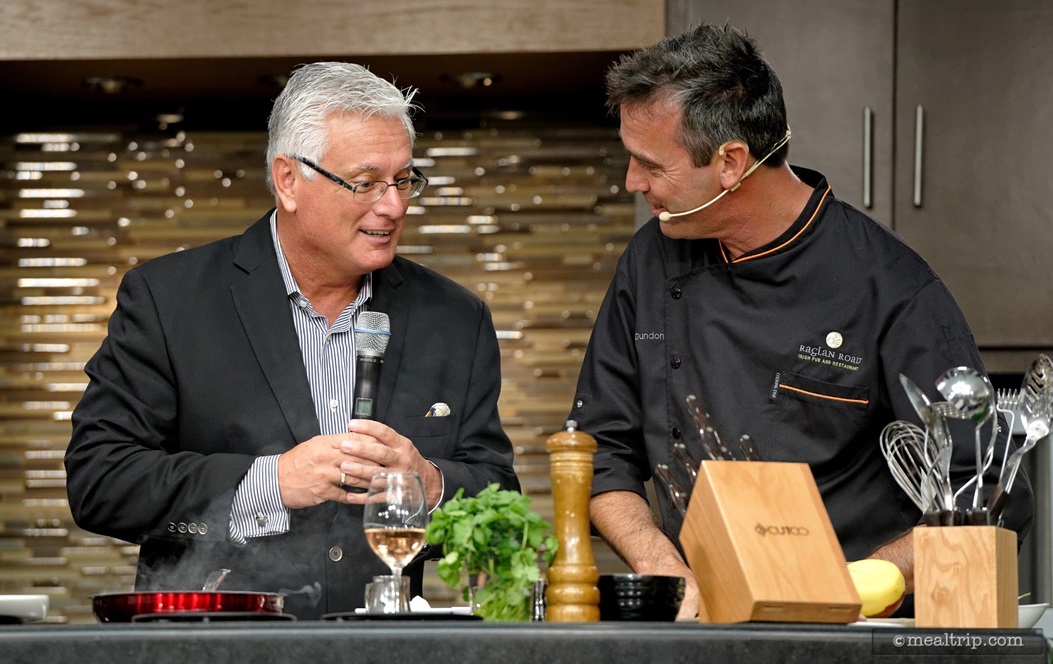 If you are a planner… it's important to get any and all information as soon as it's available, and to be on the phone making reservations on the day they open… which is usually around the middle of August. -Happy Mealtripping!
next post
Full International Marketplace Food and Beverage Items List for 2015
previous post
Chef Art's Florida Fish Camp Set to Open at Disney Springs in 2016
return to top of page
Reading takes too long... just show me the 22 photos from this article. 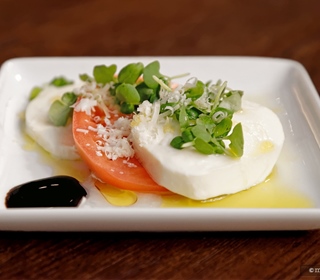