October 12th, 2015
|  by Mealtrip
Reading takes too long... just show me the 9 photos from this article.
Now that our Epcot 2015 Food and Wine Festival food booth items listings have been completed (click here to check out all the items from this year's festival), I'm celebrating by taking a quick tour of seven completely random kiosks around WorldShowcase, and selecting one favorite item from that booth. Because I very much enjoy the way phone books are organized, my seven booths for today's article are listed in alphabetical order.

The Belgium kiosk was introduced in 2010 and quickly became a festival favorite. My pick this year would be the Berry Belgium Waffle which (not surprisingly) features a punchy Berry Compote and Whipped Cream on top of a Belgium Style Waffle. 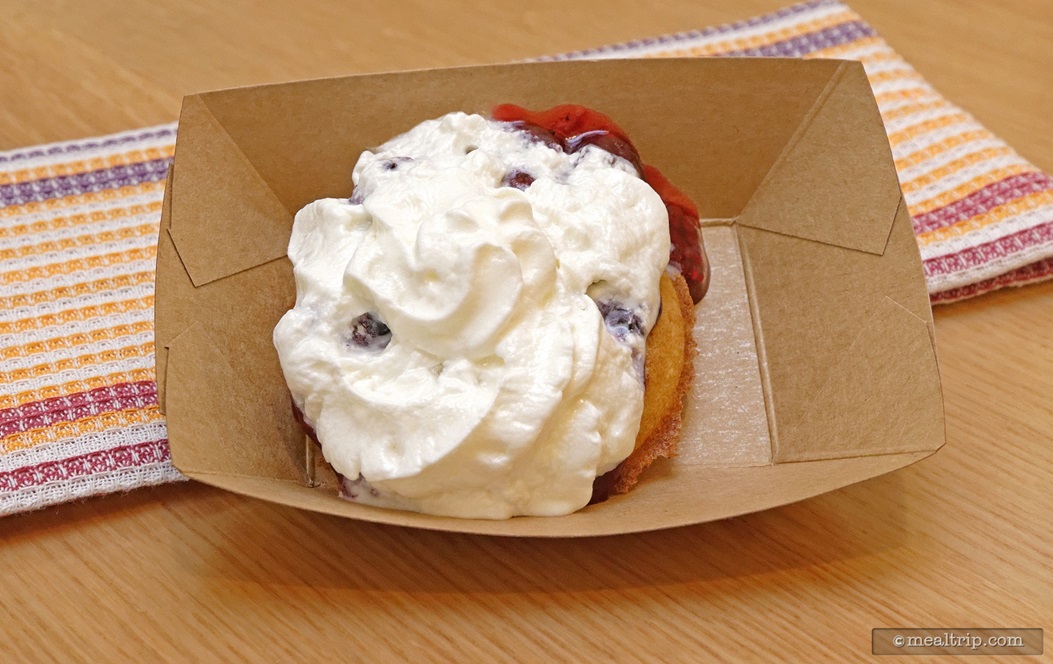 Click here to check out all of the Belgium booth's waffles. While two of the offerings are Vegetarian Friendly, there are no Gluten Free food options here. (If you go to our main food item page for the festival and click the "Gluten Free" button, all 24 of this year's Gluten Free items will appear at the top of the item grid.) The Belgium kiosk also features a great beer flight which includes Hoegaarden®, Palm Amber Ale, Leffe® Blonde and Stella Artois® Cidre.

The "Chew Labs" is a new kiosk this year and is the first of two kiosk that are located in the "Future World" area at Epcot (over on the "Land" side of the Epcot, in an area that had been known as the Rose Garden). While some of the savory items were quite good, my pick here would be the Liquid Nitro Chocolate Almond Truffle with Warm Whiskey Caramel. It doesn't look like much in the photos, but it is a creamy chocolate dessert, that won't melt instantly in the Florida sun. It's basically a chocolate ganache that has been flash frozen in liquid nitrogen! 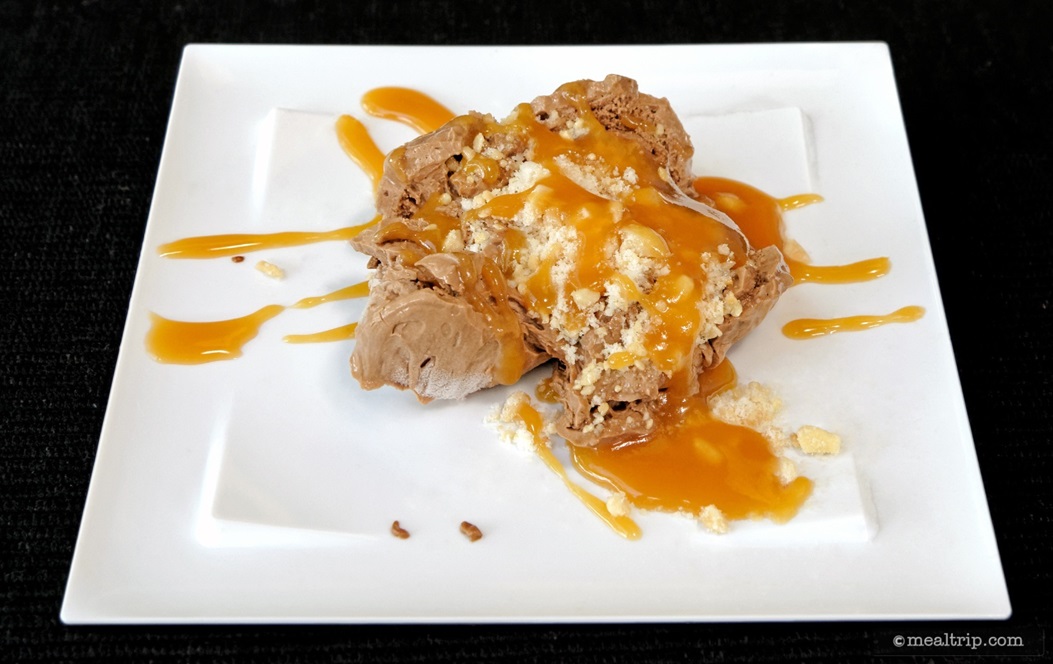 All of the items at the Chew Lab are said to be Gluten Free, but not Vegetarian Friendly. At $4.00, the Liquid Nitro Chocolate Almond Truffle is the least expensive item on the Chew Lab menu.

The Farm Fresh booth is hard to miss as it is directly on the corner as you move from Future World into the WorldShowcase (going in Mexico's direction). The smell you get when rounding the corner is from the Nueske's® Pepper Bacon that gets chopped and placed on the Loaded Mac n' Cheese hash-style.

Because bacon is always better when someone else makes it for you, the Loaded Mac n' Cheese with Nueske's® Pepper Bacon, Cheddar Cheese, Peppers and Green Onions gets my pick this year (even though the "mac" was a bit overcooked). However, the Griddled "Yard Bird" with Braised Greens is a great dish too, and both compliment each other very well. This is one of those kiosks where you could just get everything on the menu, and call it lunch! 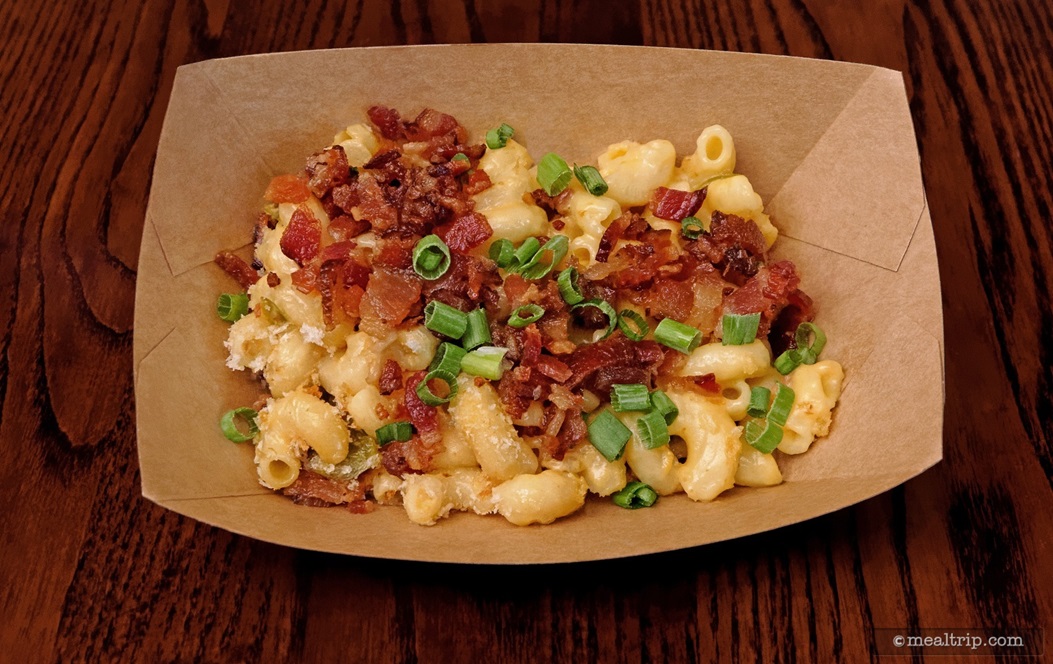 The Hawaii kiosk has only been around since 2011, but is also a guest favorite (I believe) because both items on the menu board are different from anything else you can get at the festival. The Tuna Poke with Seaweed Salad is something that anyone familiar with sushi will like. For those that don't like sushi, the Kalua Pork Slider with Pineapple Chutney and Spicy Mayonnaise is a great alternative. My pick this year is the Kalua Pork Slider, I've had some consistency issues with it in the past, but for the past few years, it's been a great mix of savory and sweet flavors, reminiscent of Pacific Island cuisine. 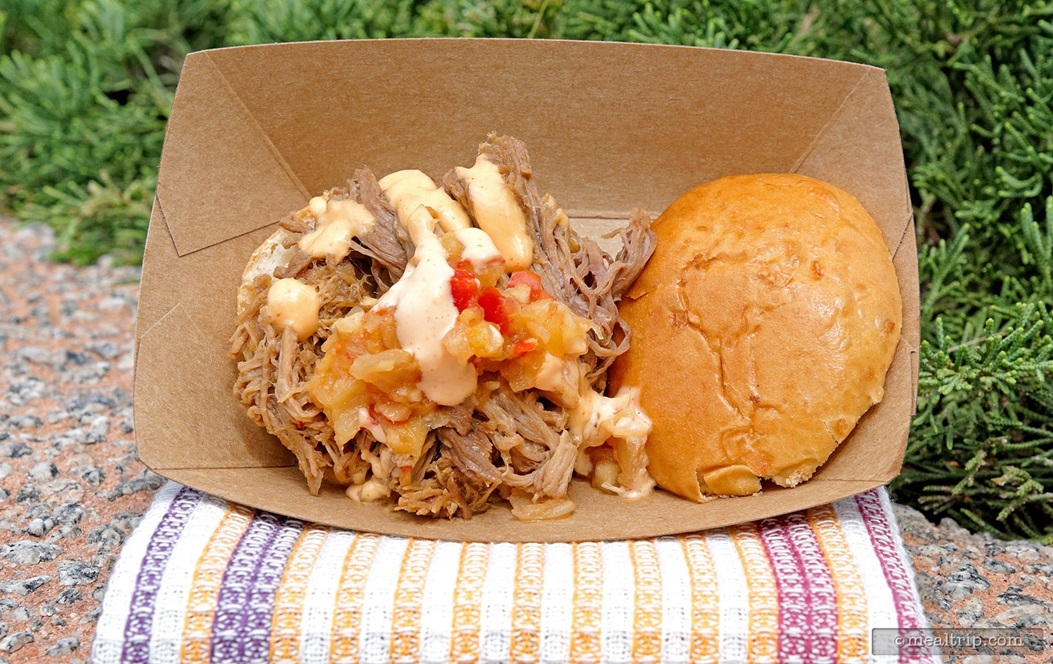 Next on our list is the Japan Kiosk and it's another one of those great locations that offers something "different" than the other kiosk. While there are a couple of gateway sushi items on the menu board, this year's Miso Udon (soup basically) with Steamed Shrimp, Vegetables, and Noodles in a Spicy Broth gets my pick. 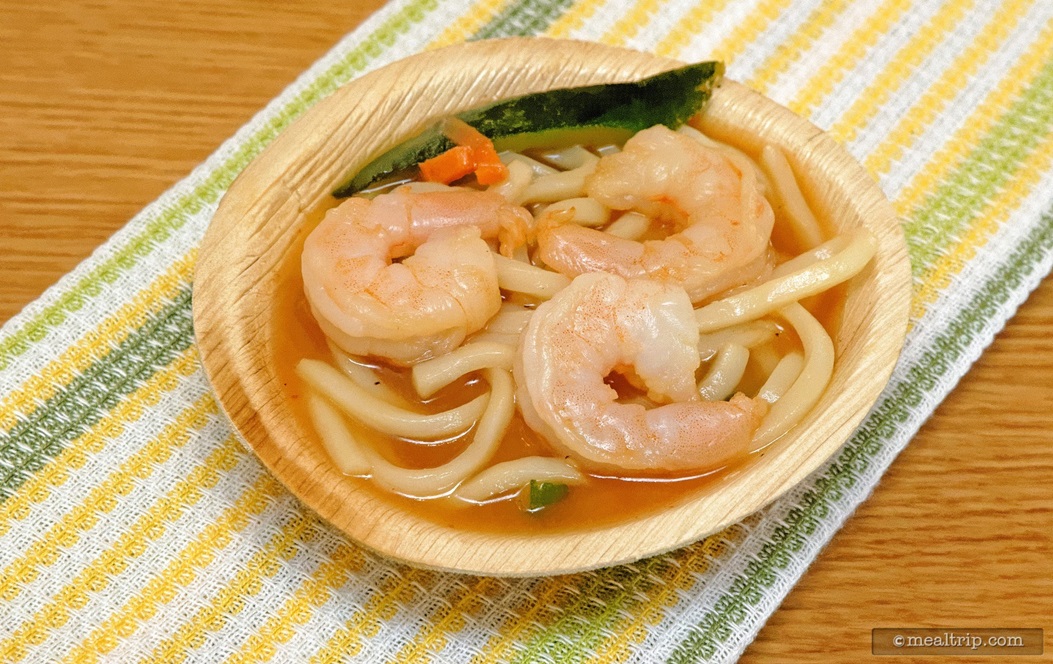 There is a great mix of ginger along with a little kick from the Miso in the broth while the solids mix leans more toward the Udon Noodles and three decent sized shrimp with only a few vegetables for color. It's hard to know if you should grab a spoon, fork, or chopsticks for this one… I used all three at one time or another!

The Patagonia booth (it's more of a region that Chile and Argentina share at the very bottom of South America, if you were wondering), offers some great items this year, and you really can't go wrong with any of them. While I like the classic Beef Empanada and the Grilled Beef Skewer very much, I'm going with the colorful Roasted Verlasso Salmon with Quinoa Salad and Arugula Chimichurri because it makes for a great photo and is Gluten Free! 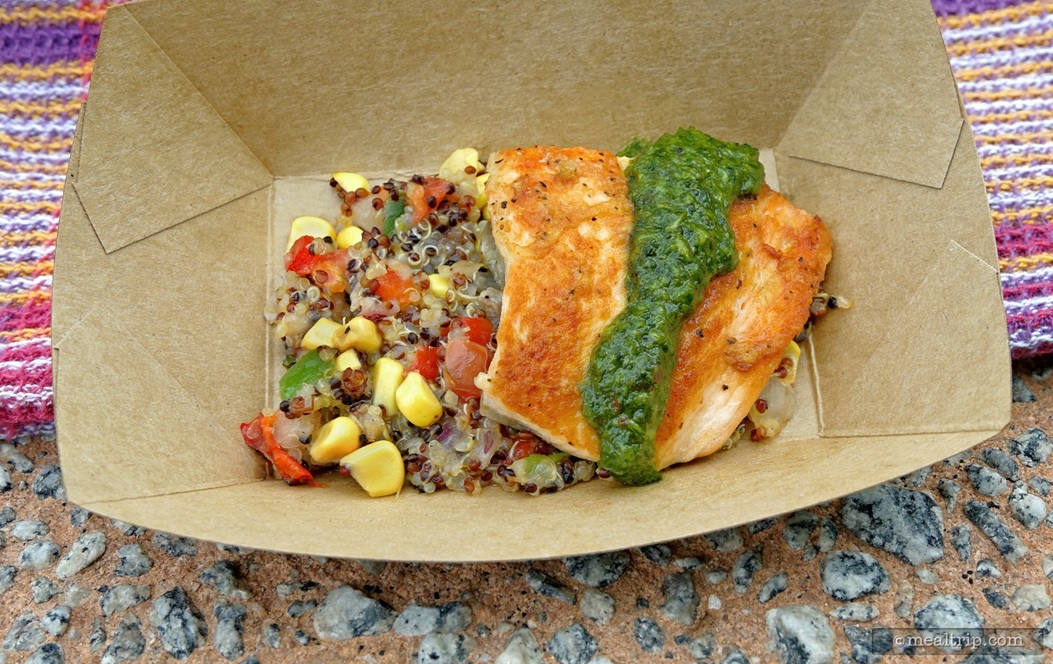 Which brings us to another new kiosk for this year's festival, the "Sustainable Chew", which is in the same general area as the "Chew Labs" booth in Future World. The word Sustainable (in this case) translates to more home-style comfort food, and while I really enjoyed some of the flavors, this is the one location where I experienced some portion issues. 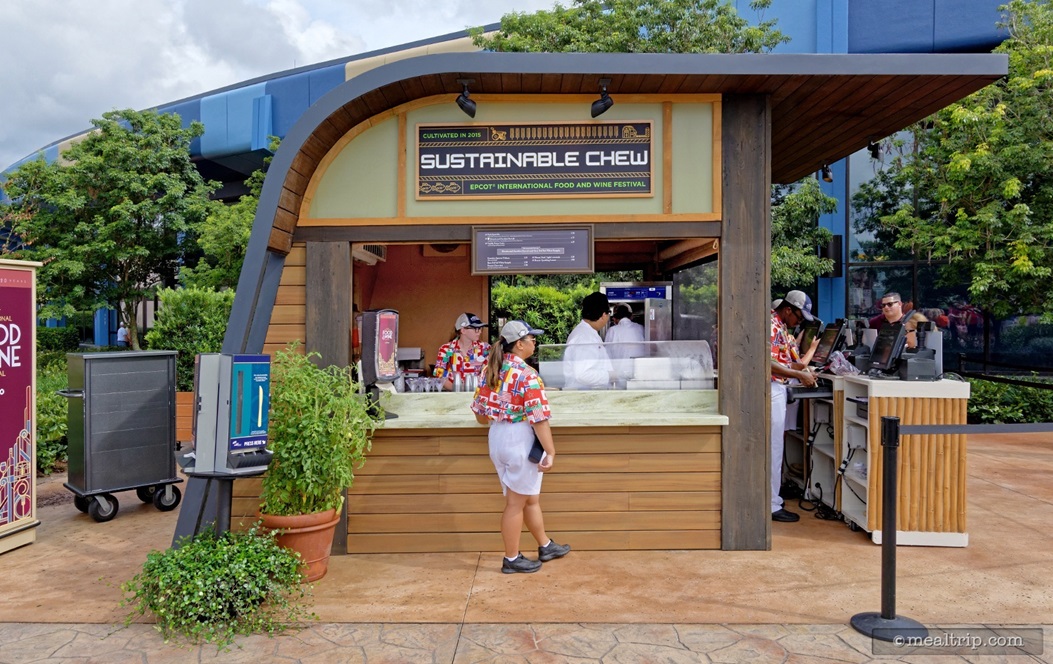 My flavor pick would be the Pork Spareribs with Red Wine, Fennel, and Cheesy Mascarpone Grits… but look… if you're going to put "Spareribs" in the title of the thing… I need to at least see one big old clunk of meat somewhere. The flavors here were amazing, but at $5.50, it's hard to recommend because the item I received was one tablespoon of grits, with one tablespoon of meat sauce layered over the top of it. 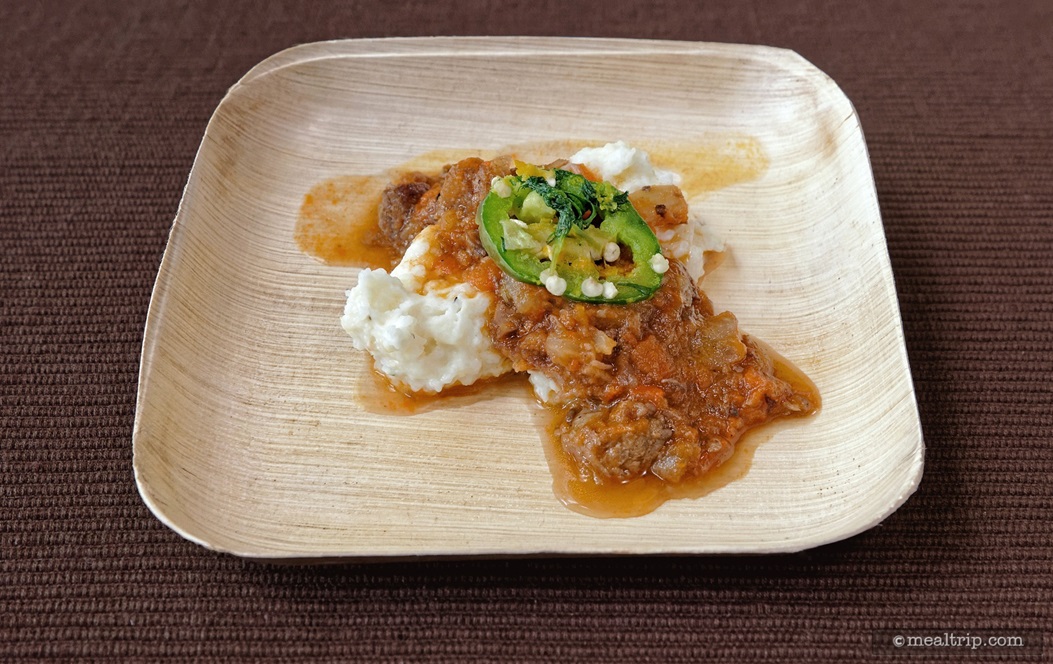 From a value and flavor standpoint, the single, giant Ricotta & Zucchini Ravioli with Tomato Sauce was a real treat. Still a little high priced for what it was, but I could totally see getting five or six of these at any Italian Restaurant as an entree. 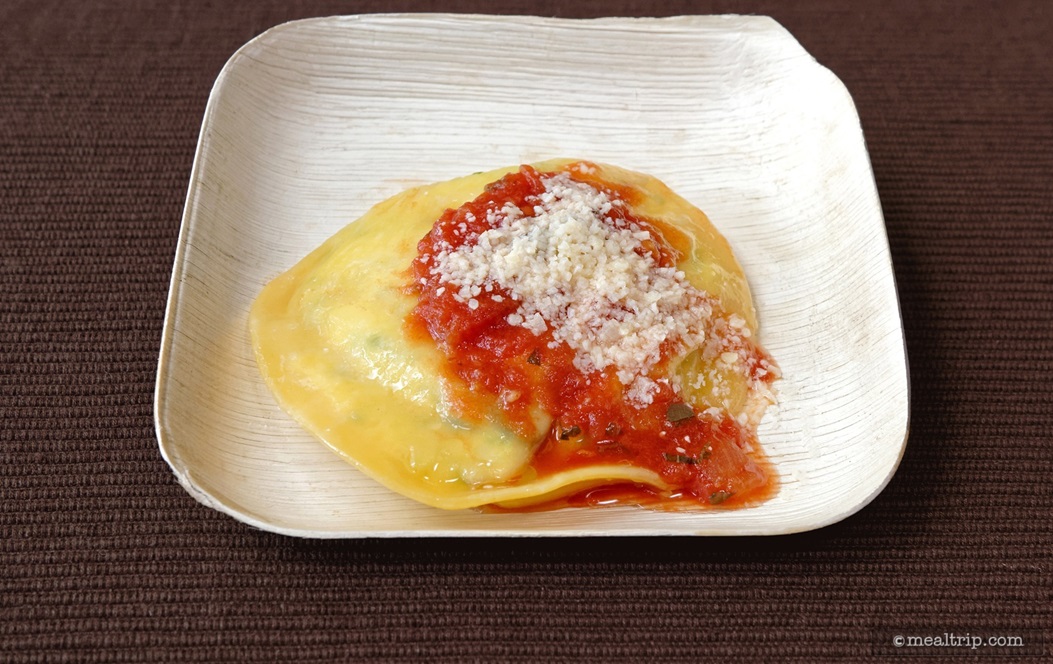 The Vanilla Panna Cotta with Fresh Figs and Pistachio Brittle… you'll have to jump to our review section to read about that one. I would love to hear from everyone out there that tried this "dessert", mostly because it received my lowest score ever, for any item, from any festival… and I'm still wondering if I got a "bad" one.

So please, take a few minutes and let us know what you thought about the food items you tried at this year's event, and we hope you enjoy viewing all of the items, before and during your visit to the festival.


I'll be back next week with a quick visit to seven more kiosks from around the Epcot International Food and Wine Festival.
next post
Sommerfest -vs- the Germany Food & Wine Kiosk
previous post
Prices, Gluten-Free, and Vegetarian Friendly Markers Added
return to top of page
Reading takes too long... just show me the 9 photos from this article.