August 23rd, 2019
|  by Mealtrip
Reading takes too long... just show me the 24 photos from this article.
Bier Fest 2019 is enjoying it's second year at Busch Gardens, Tampa… it is a craft beer and mini food festival taking place for a total of four weekends, along with Labor Day Weekend (Monday, September 2nd, 2019). Click here to visit our Bier Fest page for the exact dates and additional information about the festival.

This year's food and beverage sampling booths are located on a walking loop around the "Bier Garten" building, (which is a great place to enjoy some air conditioning). The walking loop is very cool because it allows you to stroll and sample… and eventually make it back to where you started! The 2019 Bier Fest at Busch Gardens, Tampa is set on a walking trail loop around the Bier Garten dining location.

The first place you'll want to visit though, is the Welcome Center booth to purchase a Sampler Lanyard... if you think you'll be sampling five or more things at the festival. The festival Welcome Booth is located directly across from the giant Beer Sign at the start of the walking trail. This is a great place to purchase a Sampler Lanyard.

With some food, beer, and wine prices in the $7-$9 range, the lanyard really is a good deal. The 10 sample lanyard is $49.99 plus tax, and entitles you to 10 food and beverage samples at the booths. Here's what a Sampler Lanyard looks like. This one has ten entitlements. When you get a food or beverage sample at a booth, they will punch out one of the numbers with a hole puncher (and scan the bar code on the back of the card, because you know... everything is computerized).

So instead of paying $7.99 for that Bison Slider, you'll just "pay" with your "Sampler Lanyard"… one punch equals one Bison Slider, etc. The 10 Sampler Lanyard means everything is (more or less) $4.99. Annual Passholders can get a 12 sample lanyard for that same $49.99, which is an even better deal!

Pretty much everything festival related is available at small kiosks located all around the festival walking loop. The Malt & Mill kiosk is a beverage-only location that features 8 different beers and ales.

There are large menu boards with prices in front of (or beside) each booth so you can read what they have before getting in line.

Our first stop was the "Best Bites" booth, and this one booth you won't want to miss! We're so glad to see the Reuben Croquette Bites back from last year… they were, and still are… some tasty little morsels! The Best Bites location is where you'll find some hush-puppy sized poppables, like Bacon Mac & Cheese Bites, and one of our favorites, the Ruben Croquettes. A great treat is the dipping sauces that come with the bites... you get a choice of Basil Parmesan Mayo, Sweet & Hot Mustard, and Maple-Bacon Honey Mustard.

The Reuben Croquette Bites are basically everything you would find in a Ruben Sandwich (corned beef, Swiss cheese, and sauerkraut) but in a hush-puppy sized bite. A really cool extra bonus are the dipping sauces that comes with each order… there's three to choose from, and there really is no "wrong" with mixing and matching… they all go with everything! The Reuben Croquettes contain corned beef, Swiss cheese, and sauerkraut! (They're much prettier like this, than when you bite into them... but they are oh so good.) Pictured here with a Basil Parmesan Mayo Dipping Sauce.

Next up on the walk-around is "Tacos on Tap", a very popular booth located toward the back of the loop. 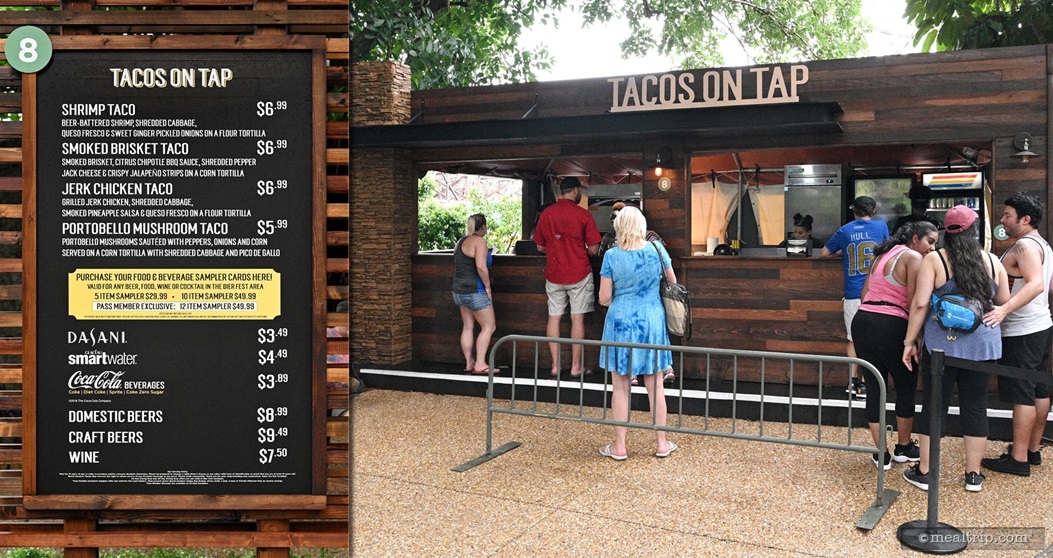 As you might have guessed, Tacos are served here… and they're another one of those "can't miss" items at the festival this year. There are shrimp, beef, chicken, and mushroom tacos available… so something for everyone… and while they did run out of the Jerk Chicken Tacos when I was in the area… I sampled the other three, and they're all pretty great! The Smoked Brisket Taco (pictured above) may be a little messy to eat (that smoked brisket is so large it's hard to contain in the taco shell)… it's oh so yummy!

So how big are the beverage samples? I would say they're probably 6-7oz pours, depending on the beverage. The wine is served in a slightly smaller cup and the beer sample cup seems to be "maybe" an ounce larger. While I didn't do an ounce for ounce comparison, the frozen drink samples were maybe even a couple ounces larger. 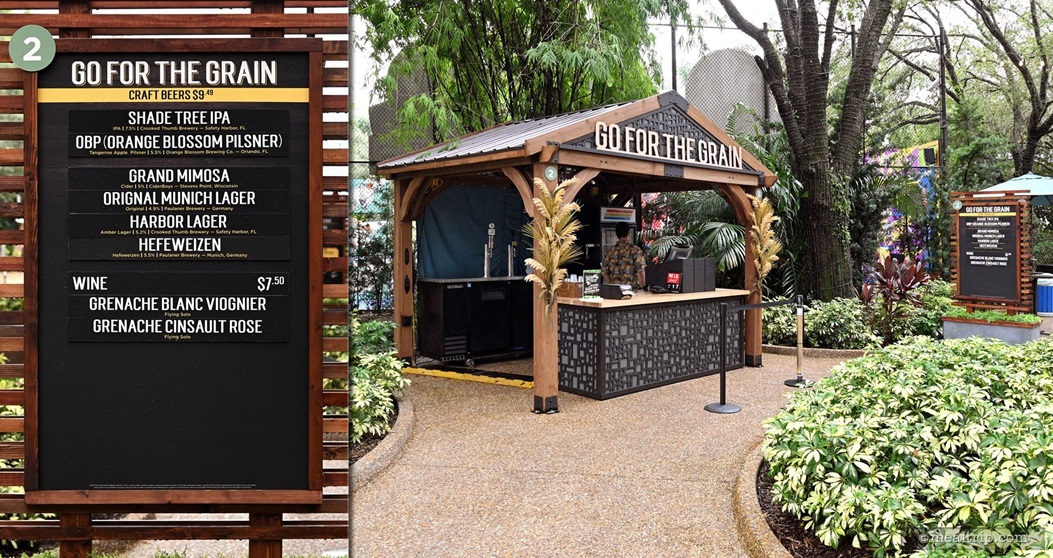 The Go For The Grain booth is located really close to the main event entrance (aka the beginning of the "loop"). They offer 6 different beers and 2 wines. Here's a Crenache Cinsault Rose (wine) and a Hefeweizen (beer) sample that we got from the Go For The Grain Booth. It's a little hard to tell because of the different shapes of glasses, but my gut feeling is there might be a little more beer in the beer sample glasses than the wine sample glasses... but that's not unreasonable.

Every once in a while, there's a booth set up with some festival merchandise and other festival related goodies. The merchandise booths aren't named, but instead, have the Busch Gardens logo on top of them. There's also no menu board out front. :) 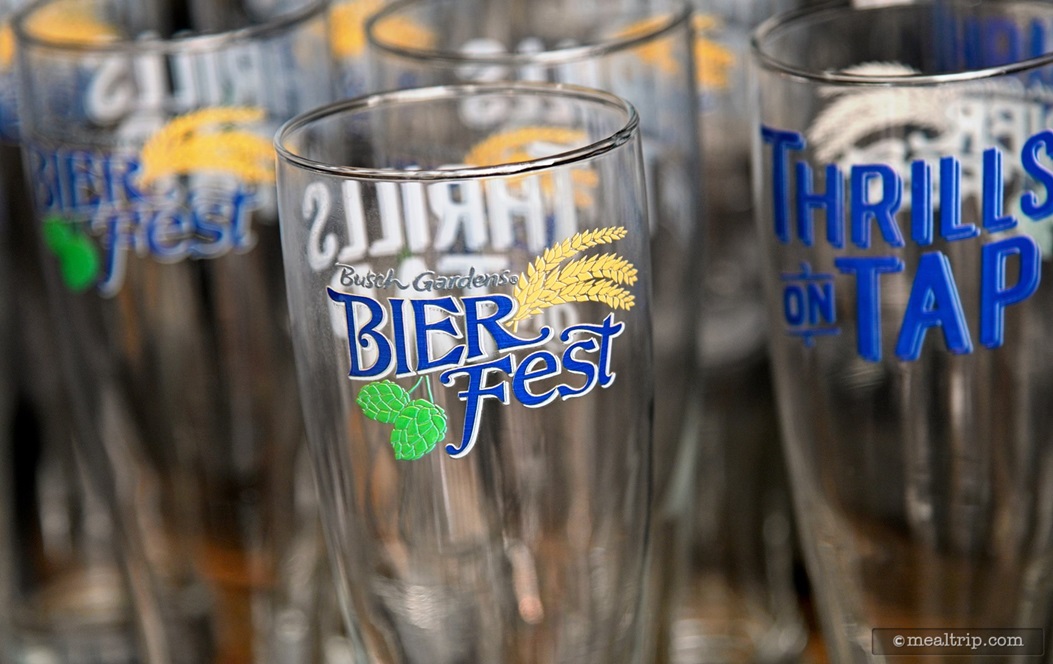 These full-sized schooners are pretty cool and can be found in the festival merchandise kiosks.

Oh okay… I had to go back to the "Best Bites" booth and pick up these Mac and Cheese bites with some Maple-Bacon Honey Mustard!!! It's hard to walk by the Best Bites booth and not pickup a hot order of Bacon Mac and Cheese Bites!

The frozen beverages at Bier Fest were a real treat and one of our favorites was the Frozen Sangria at the Tulip & Thistle booth. They have a Barefoot Cabernet Sauvignon or a Rose Sangria to choose from… both were a pretty amazing cool-down treat! Here's a Frozen Rose Sangria from the Tulip & Thistle booth. The consistency on this particular occasion... was perfect! Oh soooo good and thirst quenching on a hot day!

Also over by the Tulip & Thistle booth is where you'll find the main festival performance stage. 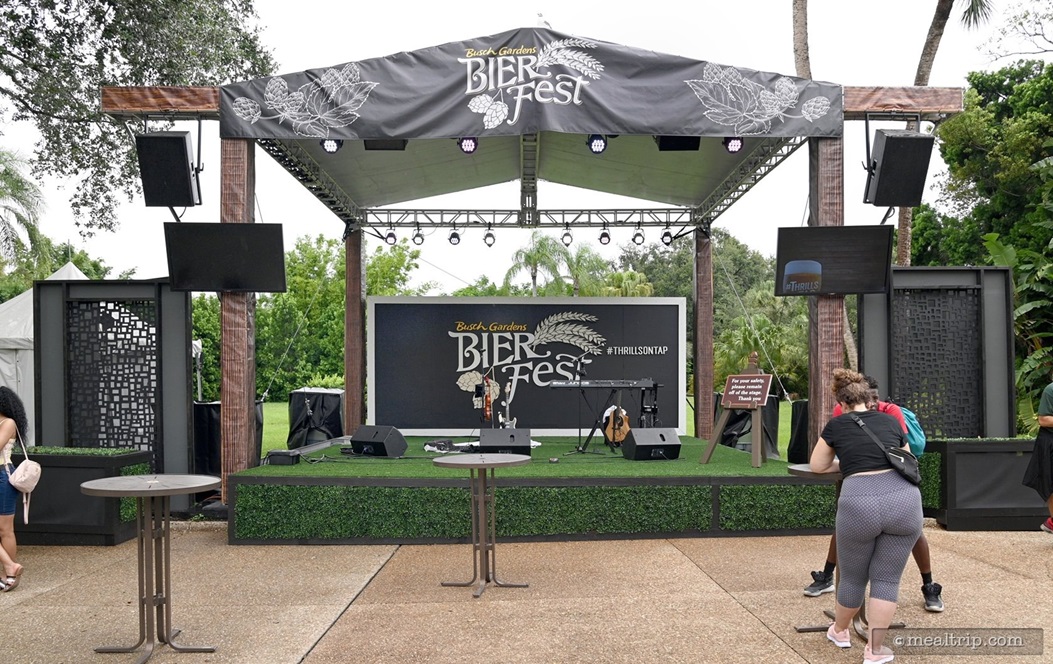 You can't miss the main performance stage! There's a couple of standing tables in front of the stage which is located between two really great kiosks... Melted Munchies and Sip N' Sliders.

The group that was there on the day we visited was "Dana and Sharon", a pretty amazing cover band that performs everything from Sinatra to Stevie Wonder and Classic Rock to Country... Big Band to Dance Band, R&B and everything in between! Truly a top-notch group! On the day we visited, "Dana and Sharon" were performing... a really great cover band duo.

Next up, a possible "miss" on the menu, the Short Rib and Brie Melt from the Melted Munchies booth. The Melted Munchies kiosk is one of the longer booths.

Sigh. The flavors on this one were sooooo great… it's just… there's not enough stuff in there… and by "stuff", I specifically mean "Short Rib". Now, I did snoop around and see a couple of the sandwiches later on in the day that were built a bit different, so this may be a training faux-paux… because I'm not really sure I'd call this a "toasted roll" either… but I can only report on the one they gave me. We don't hide stuff here at Mealtrip!

Just one booth down though, I found another really great "don't miss item" at the Sip N' Sliders booth. The Sip N' Sliders booth hits a home run this year with the Bison Burger, Schnitzelwich Slider, Bratwurst Slider, and Flourless Chocolate Torte. If you could only eat at one booth... Either this one, or the Tacos On Tap booth would get my vote!

The Bison Sliders are being grilled right there next to the booth, in all their meaty goodness (vegetarians, you may want to skip the next photo). Vegetarians look away! Bison Patties doing their thing on a super hot grill. We love seeing on-stage cooking areas because you know you're getting something hot, fresh, and (more or less) made to order!

Once assembled on a really great Pretzel Roll with Provolone Cheese and some Bacon and Onion Marmalade… it was off the charts great, paired well with just about any beer, and is probably my favorite food item at the festival this year! Time for dessert! There's a cool little booth next to the Bier Garten building simply called "Floats" that features three "hard floats". They do tend to melt pretty fast in the heat, so it's hard to get a really great photo of these little cups of ice-cream goodness, but the Hard Coffee Float featuring Pabst Blue Ribbon Hard Coffee over Chocolate Soft Serve Ice Cream… was a pretty great "dessert" beverage. Our Hard Coffee float paired really, really well with a food item from the (almost) near by Sip N' Slider booth (which is where we got the Bison Slider)… their Flourless Chocolate Torte was a really dense, dark chocolate, creamy bit of goodness… that's almost like eating a cold fudge, but without any sugary grittiness. Back over at the Sip N' Sliders booth, the Flourless Chocolate Torte is served with Guinness-infused Whipped Cream. This is one dense, creamy, dark chocolate dessert item!

The Guinness-Infused Whipped Cream was just kind of "ok" in my mind… you really couldn't taste much beer in the Whipped Cream… it just wasn't obviously sweet like a normal whipped topping. It didn't matter though, that Chocolate Torte was good enough to stand on it's own as the best "dessert" item at this year's festival!

We'll be back next week, to report on some of the other food and beverage items we found at the 2019 Bier Fest, at Busch Gardens, Tampa!

For more information and report posts from the festival (including photos of all the menu boards and prices for 2019) be sure to visit our main Bier Fest page!


The Mealtrip.com visit to Bier Fest was hosted by Busch Gardens, Tampa. When accepting event invitations, we are not required to review the event, and/or review the event, food, beverage, or merchandise items favorably. Check out our FAQ page for more disclosure information.
next post
Food & Beer Menu Items for the 2019 Craft Beer Festival at SeaWorld, Orlando (Text List)
previous post
Busch Gardens Bier Fest Menu Boards with Prices for 2019
return to top of page
Reading takes too long... just show me the 24 photos from this article. 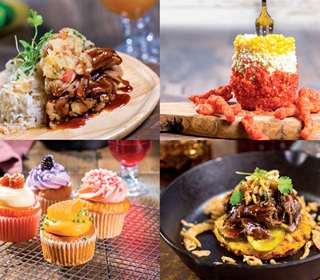