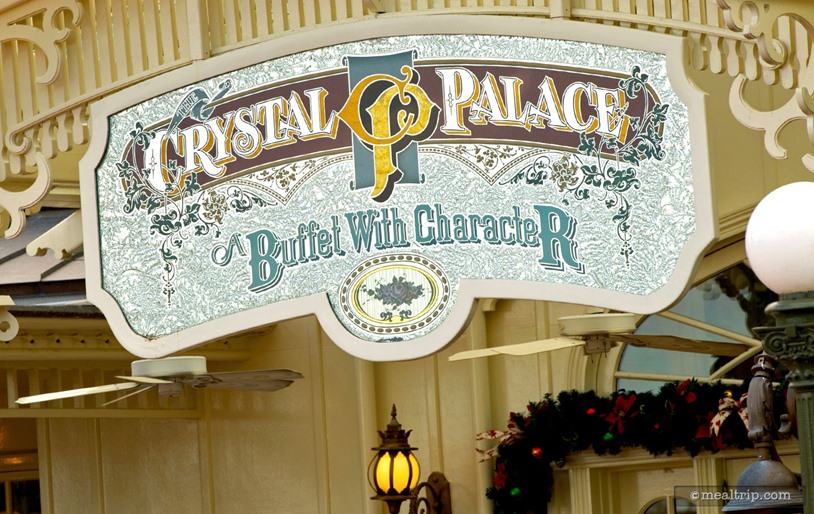 The Crystal Palace Buffet sign, hanging over the front entrance of the restaurant. 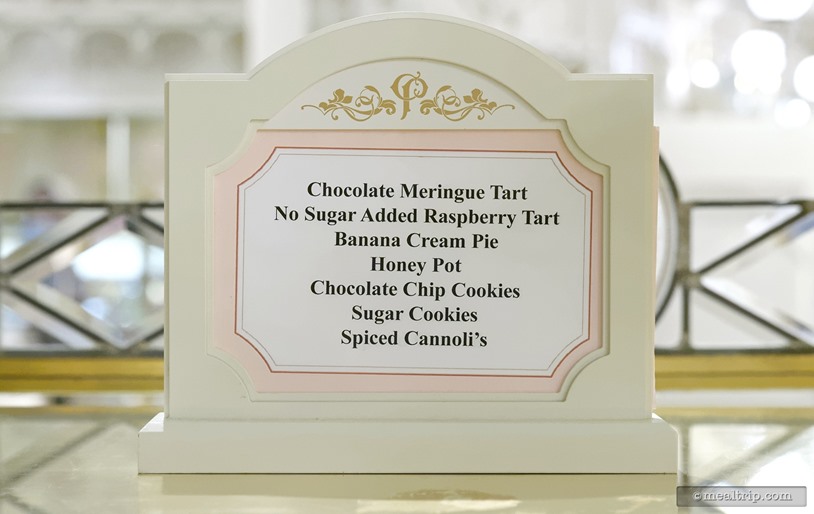 This is what one of the buffet menu boards looks like at the Crystal Palace. They are easy to read, and are positioned near the food. This one is for some of the desserts. It's important to note, that while the culinary is very "Americana", the specific food items could change daily. 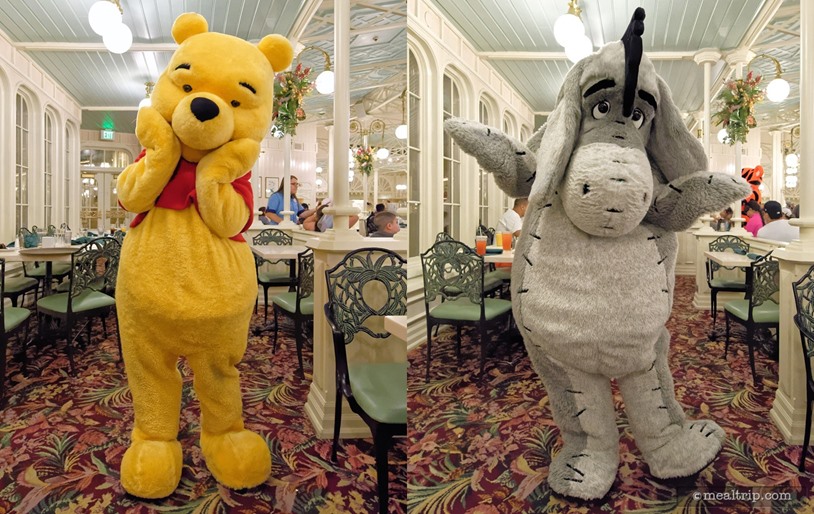 It's Winnie the Pooh and Eeyore at the Crystal Palace Character Breakfast! 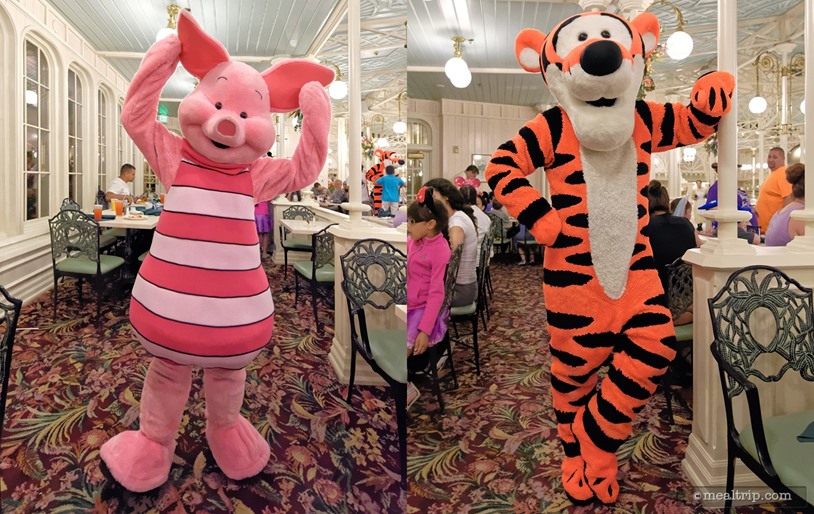 Here's Piglet and Tigger at the Crystal Palace Character Breakfast! 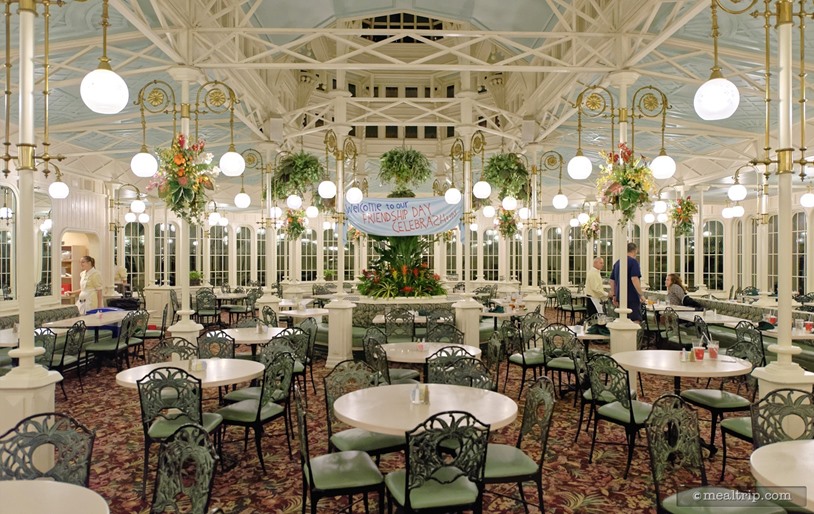 The Crystal Palace has two main seating areas, both are nearly identical (the dining area on the west is little larger), and they take the form of a giant hexagon. This is a look at the west dining area. 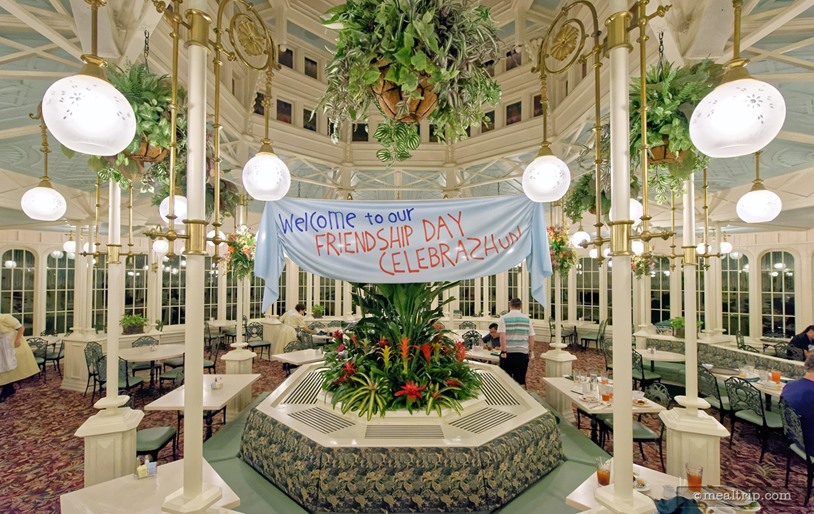 The "Friendship Day Celebration" banner hangs near the center of each of the dining areas. The center feature itself is a mix of planter, air conditioning system, and bench style seating 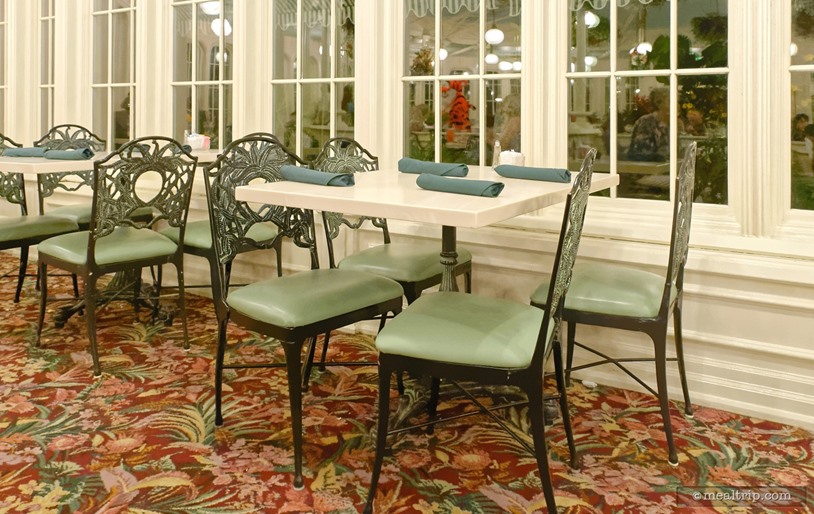 Here's an newly set table, all ready to go for the next guests! 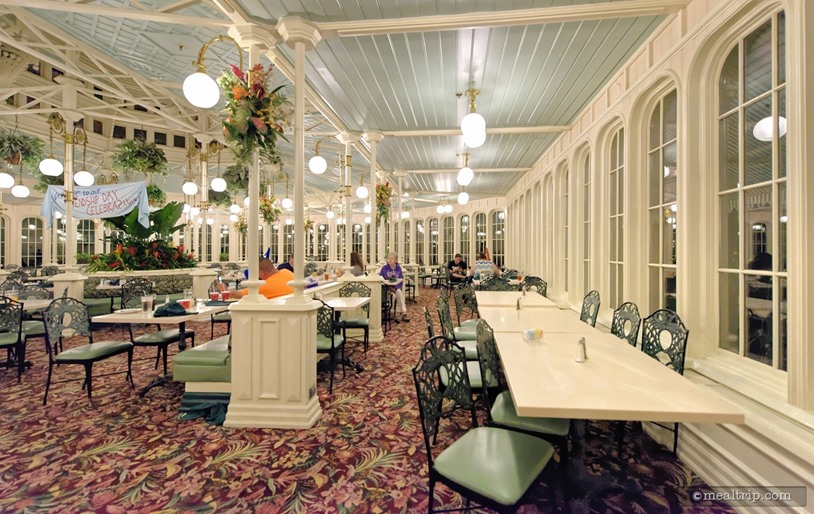 Seating is very tight at the Crystal Palace. There's enough room for the characters to move around, but that's about it! 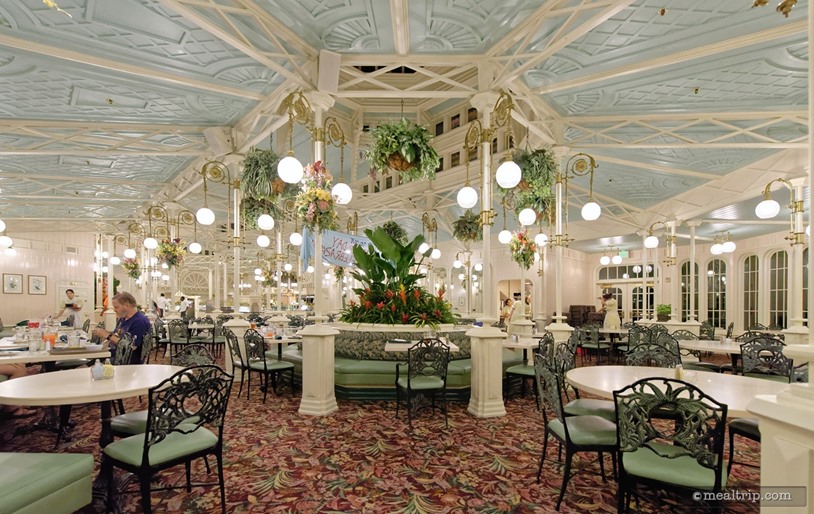 This is a look at the west dining area, while standing in the west-most point in the restaurant, and pointed toward the center. If you look way off in the background of this photo, you'll see the buffet line (beyond the seating/planter feature). 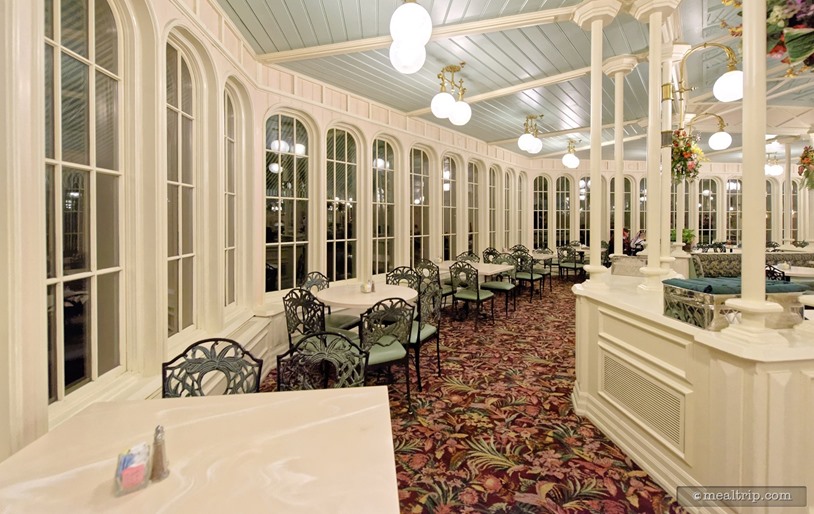 This is a great look at the hexagon shaped walls in the Crystal Palace dining area. On the right hand side of this photo, is a small, behind the scenes area. It's where all the used plates and glasses go when you're done with them. :) 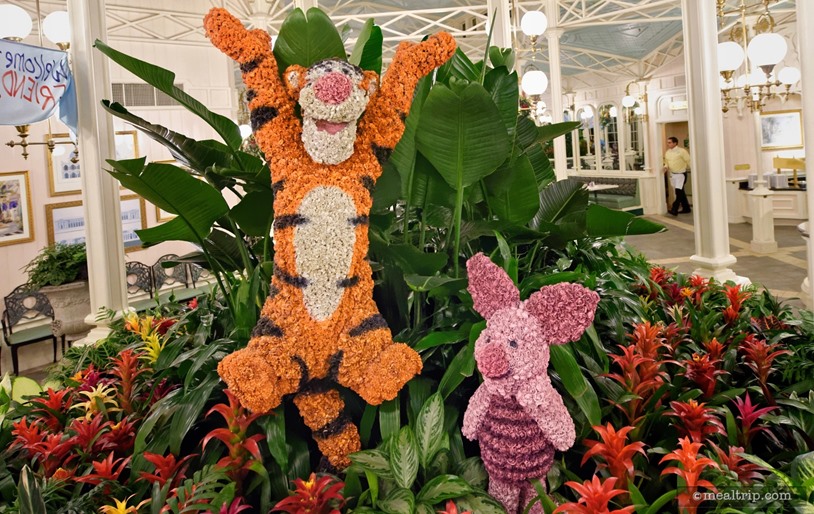 Hey there! It's the Tiger and Piglet topiaries, located in the center atrium area at the Crystal Palace! 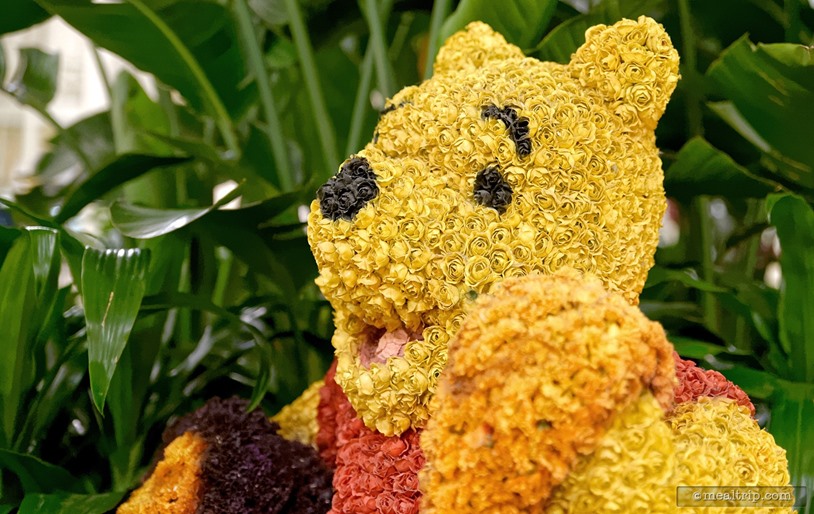 The Winne-the-Pooh topiary is located in the center atrium area at the Crystal Palace. 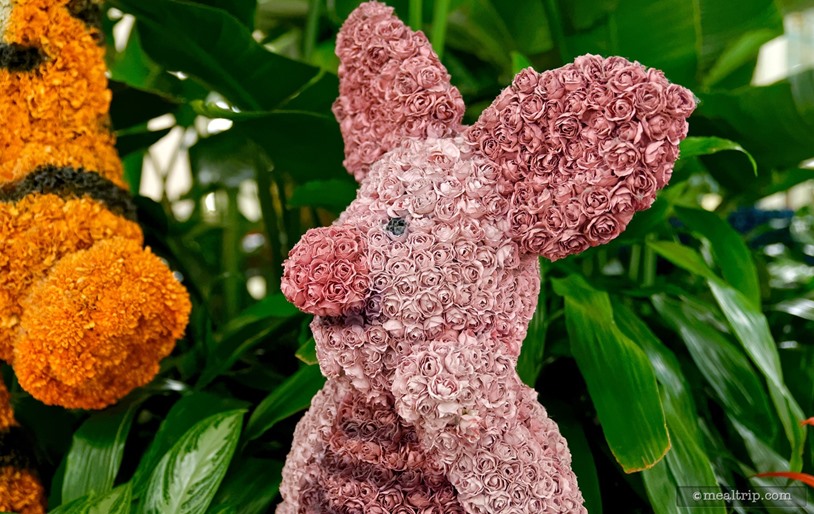 A side view of the Piglet topiary in the center atrium area at the Crystal Palace. 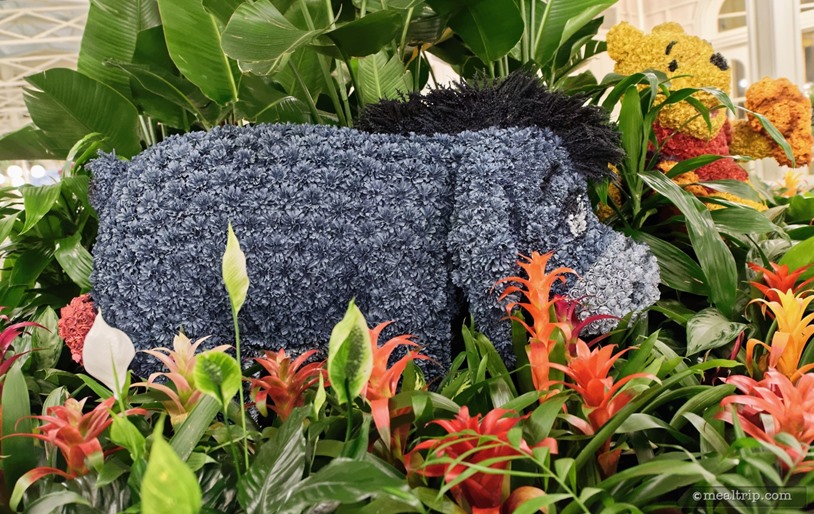 A flank side view of the Eeyore topiary in the center atrium area at the Crystal Palace. 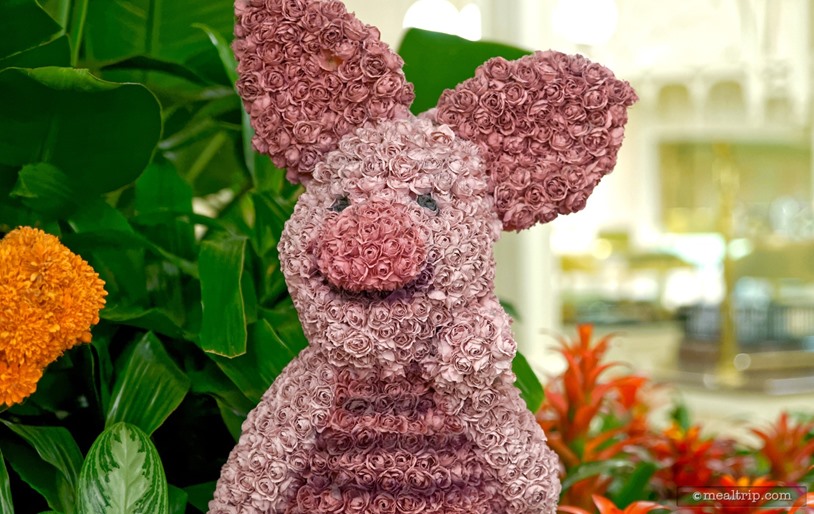 Hey there Piglet!!! From this angle, you can see parts of the buffet line off in the distance. 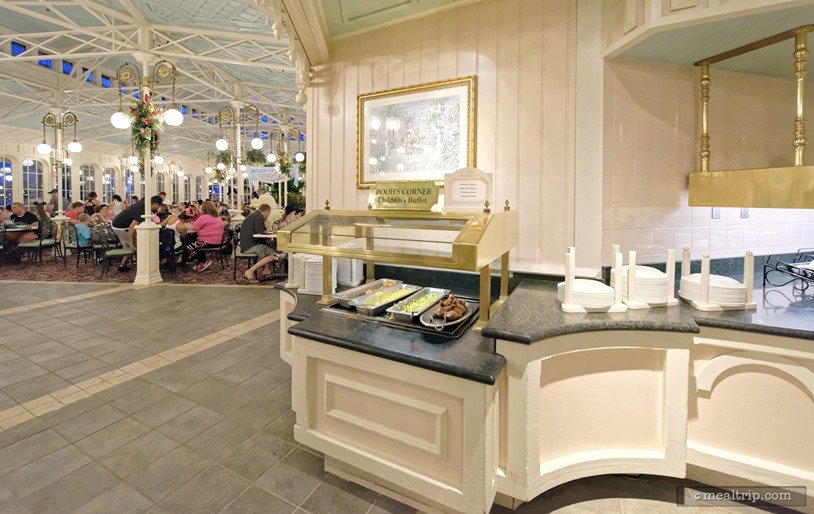 Here's a look a the children's buffet table. It's located at the very beginning of the main "grown-up" buffet line. It's placed here (presumably) so even the little ones can go up to the buffet and grab something to eat, and still be visible to family members that are sitting in the dining area or in the grown-up buffet line. 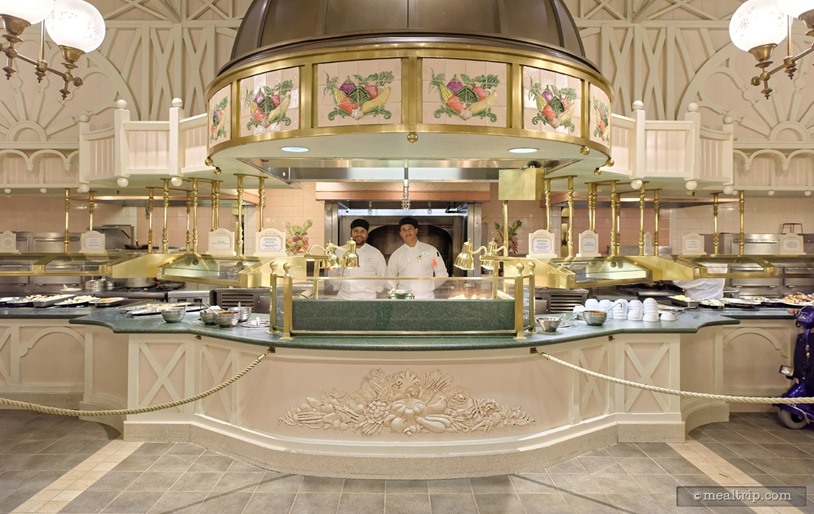 Right in the center of the left and right side buffet lines, there's a made-to-order omelette station and/or meat carving station (I've seen it used for various things over the years). It's accessible to the left and right hand sides of the line. The buffet area at Crystal Palace is quite large. The area is divided into a left and right side, and both sides have the same food items. Here's a photo of the "warm and hot buffet items" line. There's another one of these on the other side of the room, which features the same items. This "buffet mirror" helps speed things up, and keeps lines at the buffet tables, relatively short. 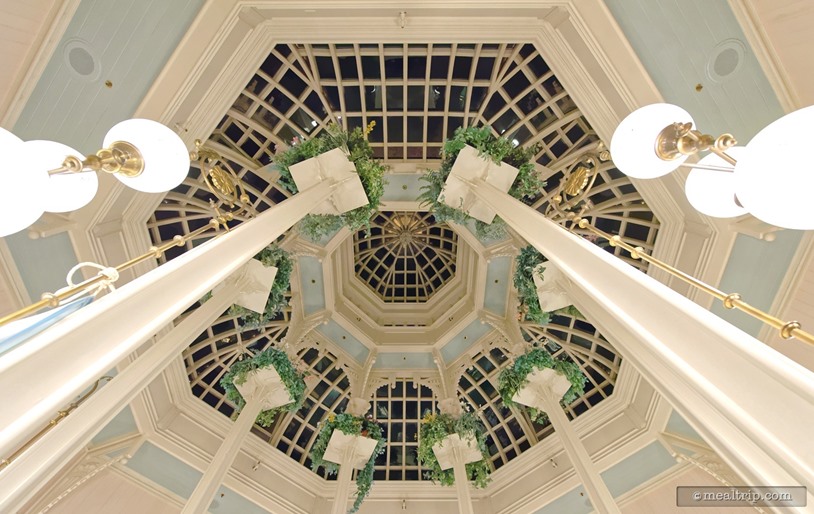 Just as you walk into the Crystal Palace, there's a center atrium and foyer area that separates the two dining areas. This is a look up at the ceiling in the foyer. You can't stand directly in the center of the glass ceiling, because there's a small topiary garden featuring characters from Winne the Pooh underneath.
return to top of page
ACCEPT
This website uses cookies to personalize content and ads, to provide social media features and to analyze our traffic. We also share information about your use of our site with our social media, advertising and analytics partners who may combine it with other information that you have provided to them or that they have collected from your use of their services. You consent to our cookies if you continue to use our website. A link to our Terms of Service, Privacy Policy, and Cookie Use page is provided at the bottom of our site's home page.