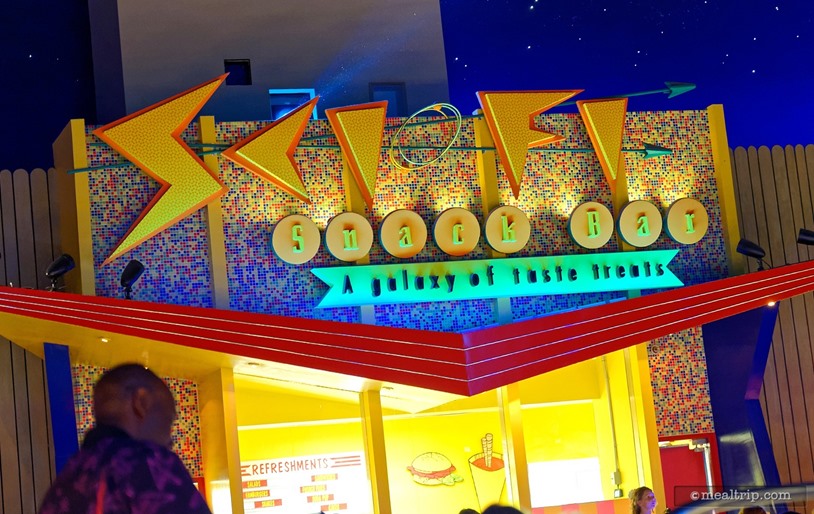 The "Sci-Fi Snack Bar" facade is at the back of the restaurant. The projector for the main movie screen is just above the sign. It's a very convincing looking "drive-in". 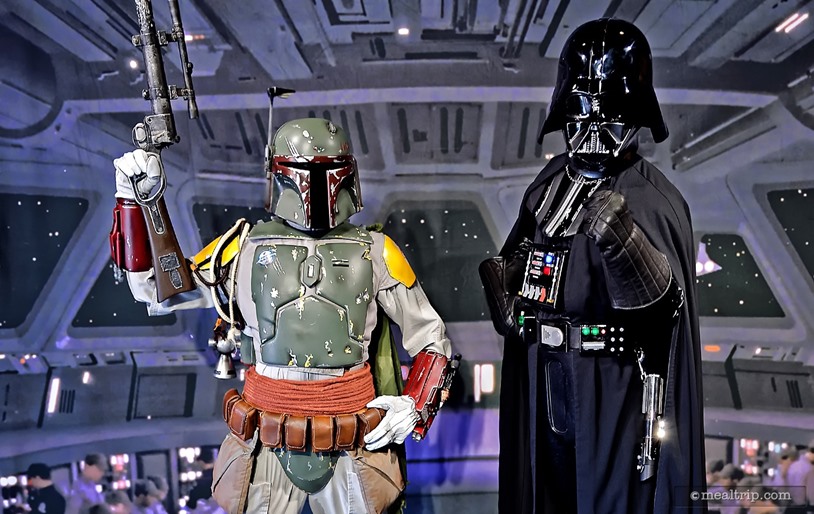 Darth Vader and Boba Fett pose for photos with guests before entering the main dining area at the Star Wars Dine-In Galactic Breakfast. 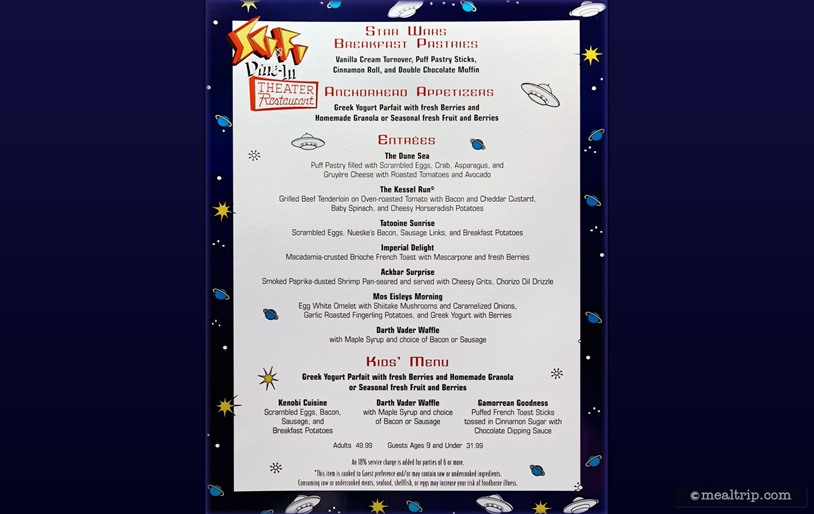 A 2015 menu from the Star Wars Dine-In Breakfast at Hollywood Studios. 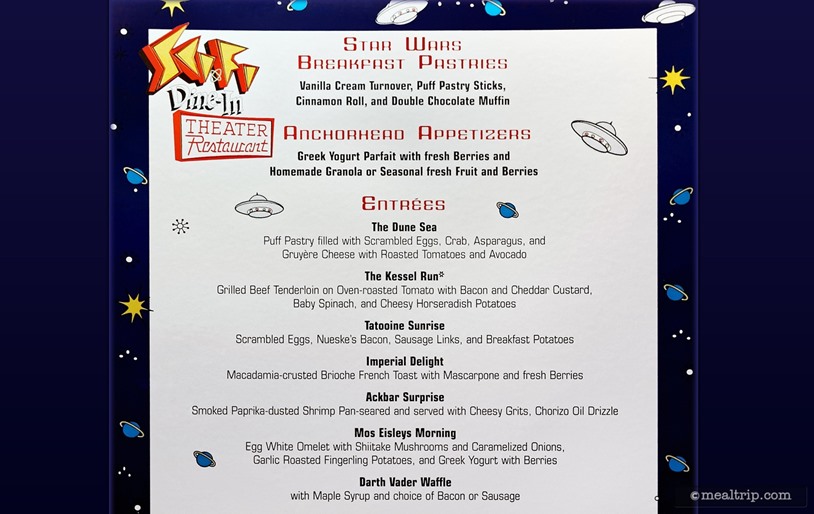 A 2015 menu from the Star Wars Dine-In Breakfast at Hollywood Studios zoomed in on the entrees. 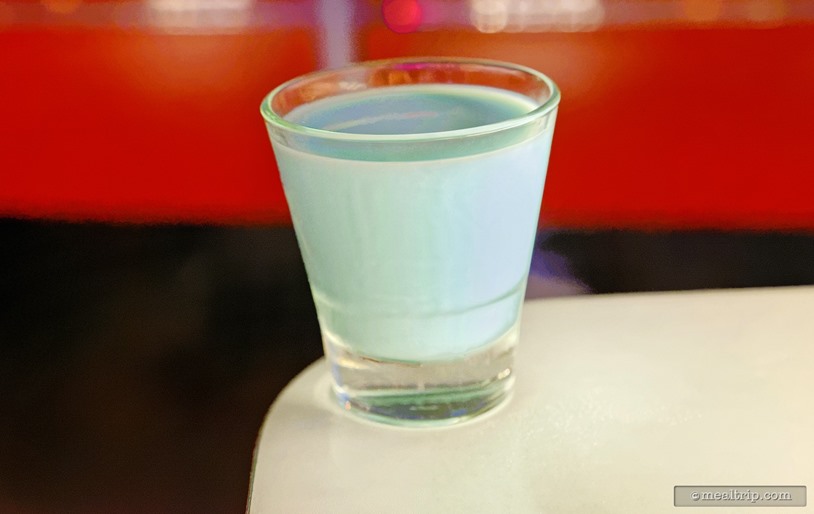 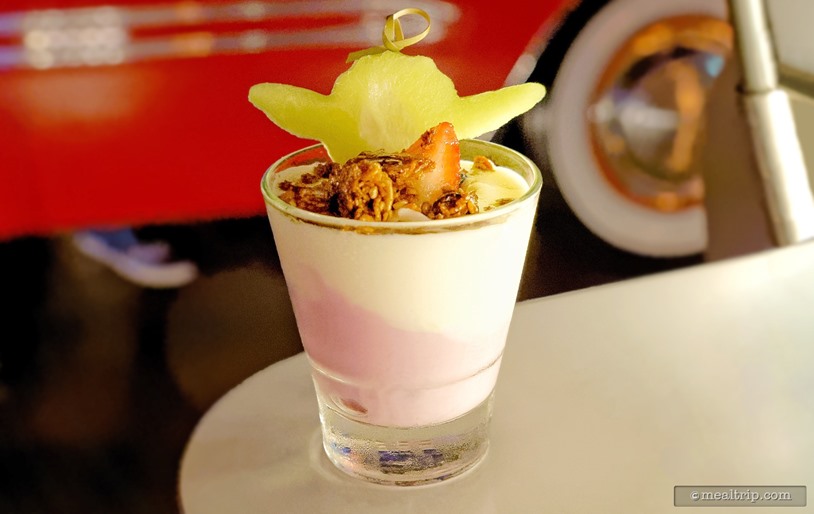 The Greek Yogurt Parfait with fresh Berries (there's blueberries in the middle of the yogurt mix and a couple of cut strawberries on top) and Homemade Granola features a fruit Yoda head. 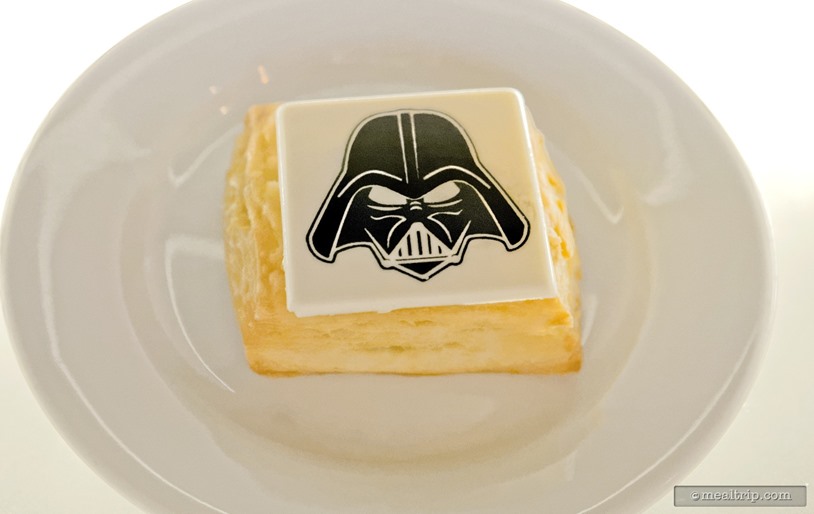 Darth Vader's Vanilla Cream Turnover... "turnover" to the dark side! Okay, the theming is kind of thin, but the vanilla cream turnover was quite tasty. The turnover combined fresh, flaky layers of pastry filled with a "not too sweet" thick vanilla cream, and topped with a screen printed white chocolate Darth Vader square. 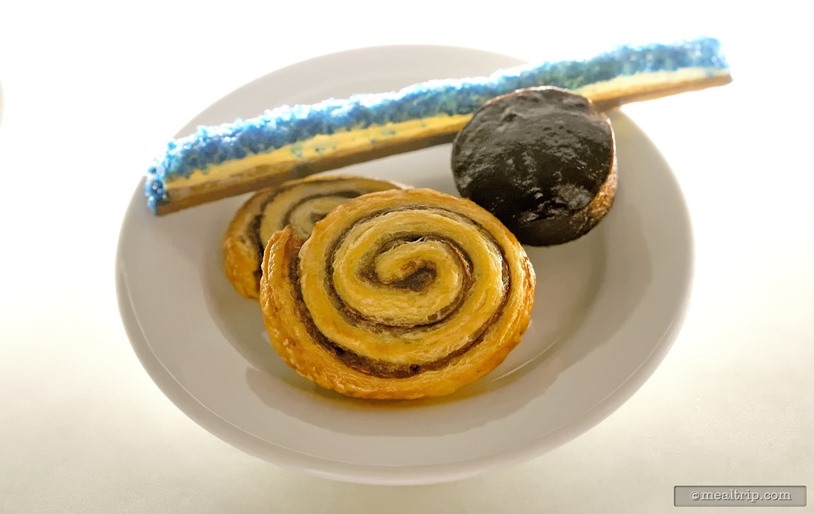 A Blue Lightsaber Puff Pastry Stick, Cinnamon Rolls, and a Double Chocolate Muffin from the Star Wars Breakfast Pastry plate. All of the pastries were quite good. 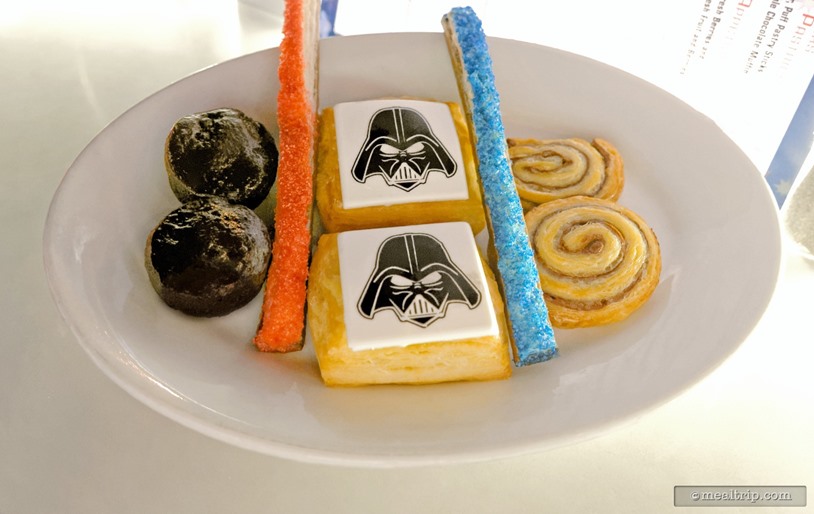 The full Star Wars Breakfast Pastries plate from the Galactic Dine-In Breakfast. Each "car row booth seat" received one of these plates, no matter if there were one or two guests sitting there. If you didn't want to "share" yours with your dining companion, just ask for another plate... they will be more than happy to bring another. 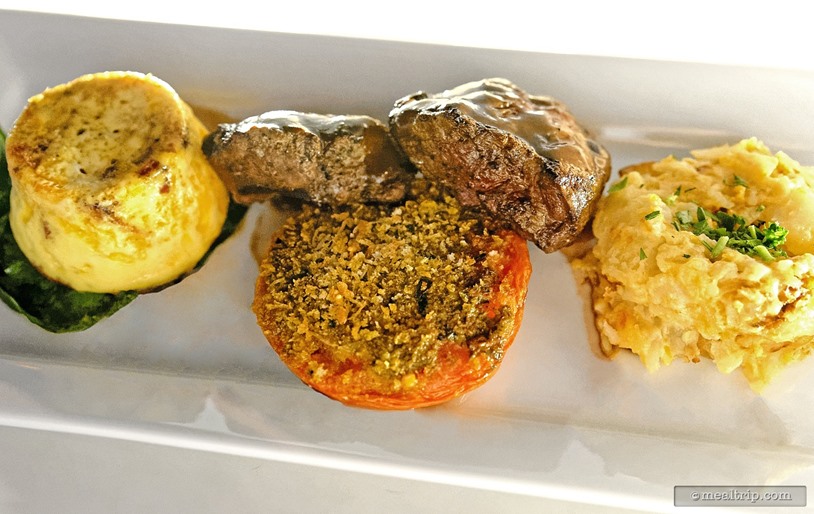 The Kessel Run breakfast entree at the Star Wars Galactic Dine-In. Normally, I'd say there's a hidden Mickey in my food, but in this case, it looks a bit more like Princes Leia's hair buns. 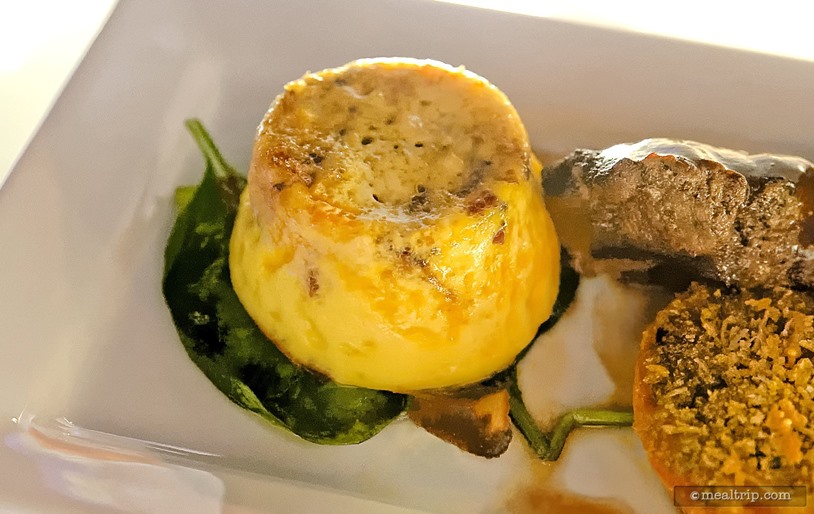 The "bacon and cheddar custard" sounds a lot worse than it is. The nicely formed portion is more "scrambled egg-like" than anything, but has a nice smoky quality from the bacon and a mild-sharpness from the cheddar. 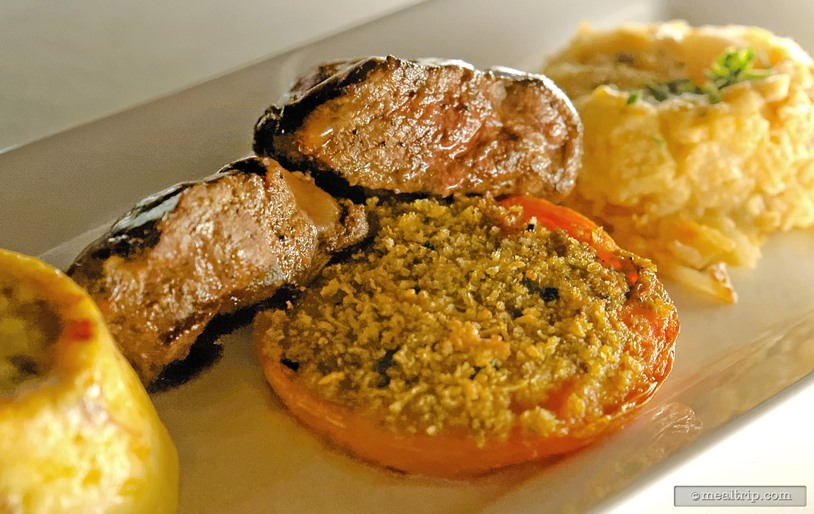 The two steaks and roasted tomato portion of "The Kessel Run" breakfast entree. The steak pieces are 2-3oz cuts. 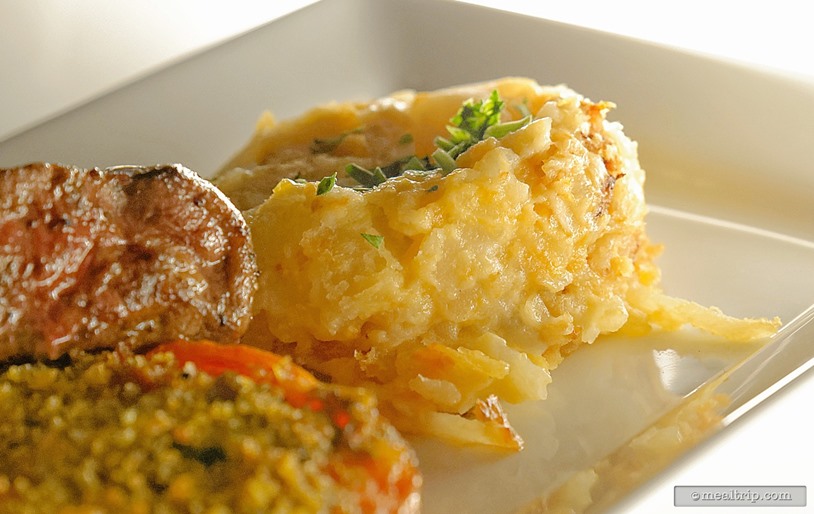 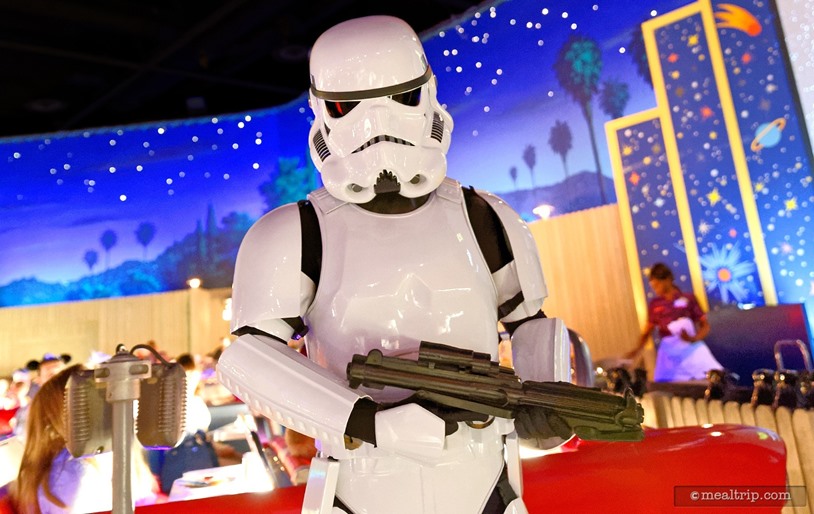 Stormtroopers walk the room and keep everyone inline. 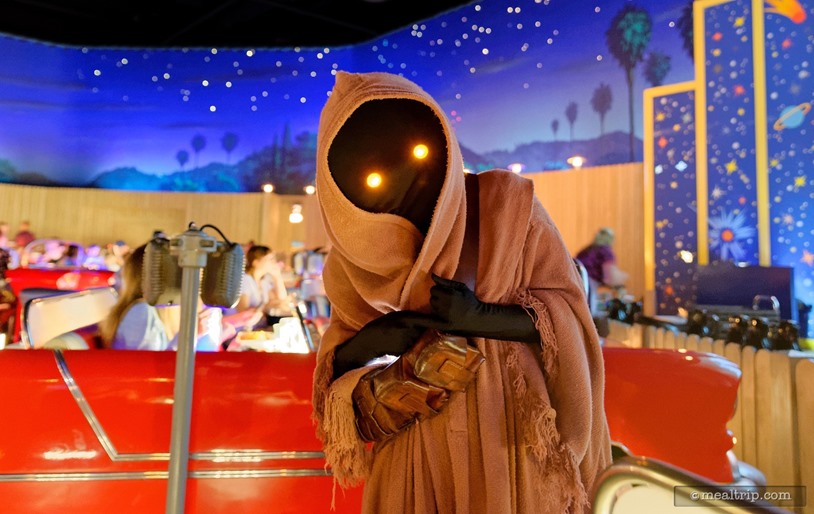 Awe... hey little guy. Jawas are walking around looking for things to trade. If you have a (non-valuable) object with you (the restaurant's silverware doesn't count), you can trade it with the Jawas. They really like shiny things. 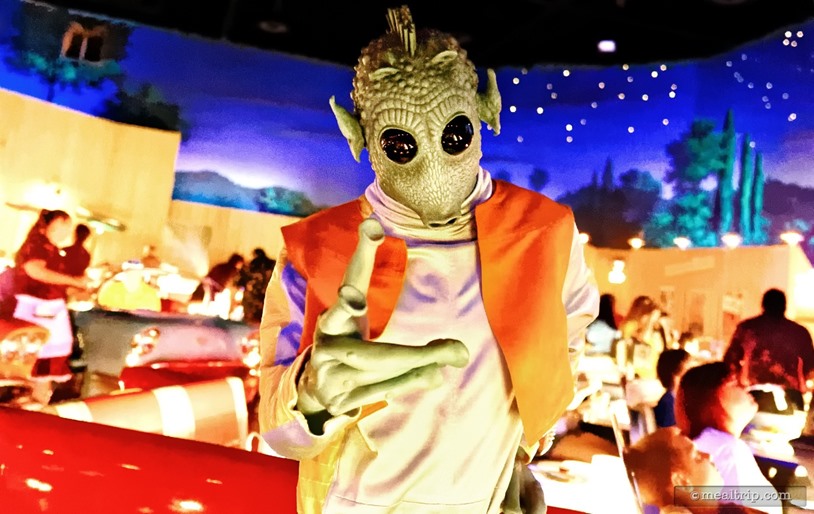 Greedo works the room at the Hollywood Studio's Star Wars Dine-In Galactic Breakfast. Greedo lived in Mos Espa alongside Anakin Skywalker. He was, sadly, shot by Hans Solo in the Mos Eisley Cantina. 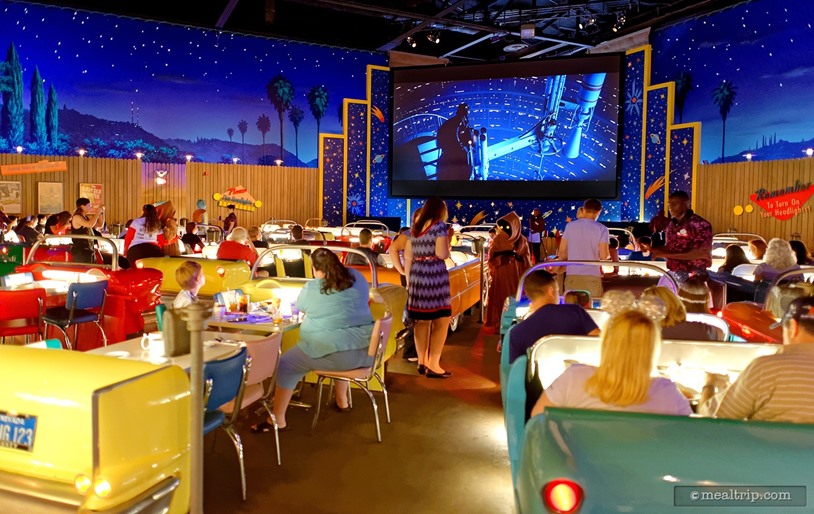 Star Wars clips are playing on the big screen as guests enjoy the Galactic Dine-In Breakfast at Hollywood Studios. 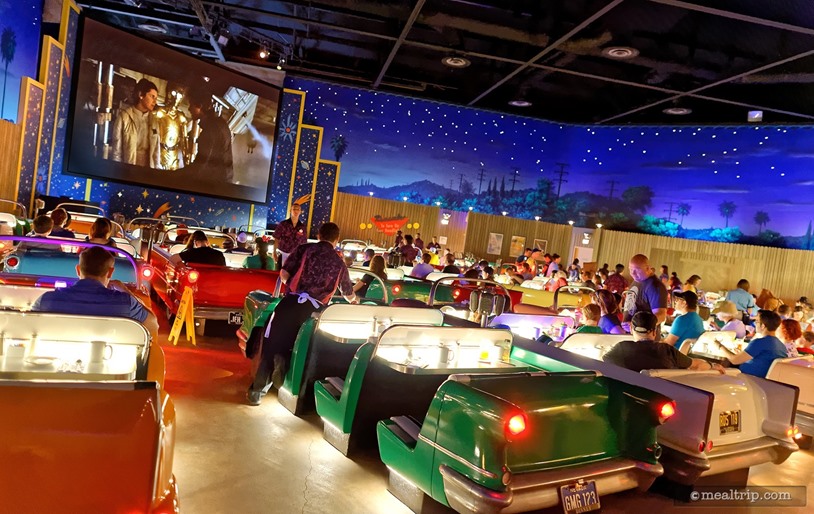 Booths in the shape of cars are lined up so that everyone can see the movies. 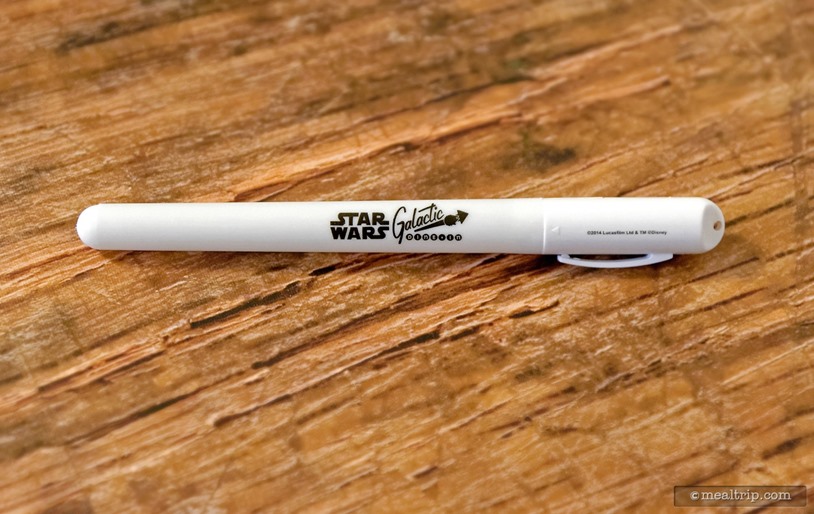 During the 2015 breakfast, each guest has been given a small led lightsaber. This great little souvenir has a button that allows guest to turn on a red or blue light depending on which "side" you are on.
return to top of page
ACCEPT
This website uses cookies to personalize content and ads, to provide social media features and to analyze our traffic. We also share information about your use of our site with our social media, advertising and analytics partners who may combine it with other information that you have provided to them or that they have collected from your use of their services. You consent to our cookies if you continue to use our website. A link to our Terms of Service, Privacy Policy, and Cookie Use page is provided at the bottom of our site's home page.