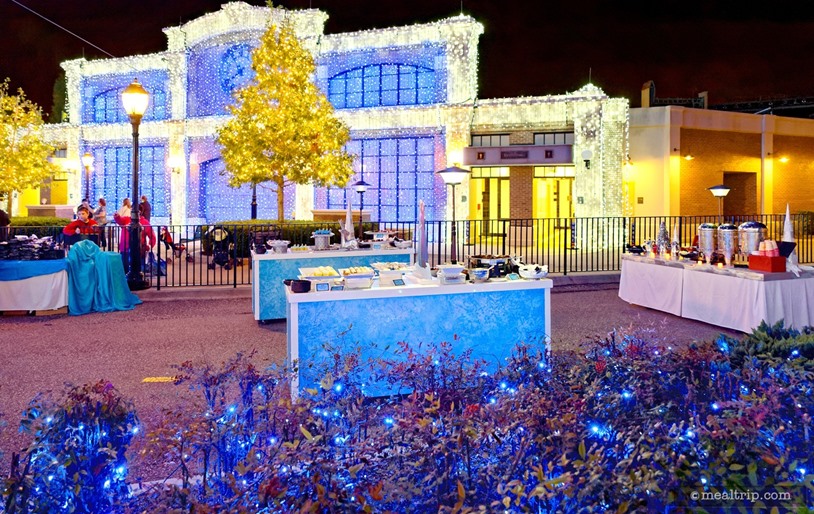 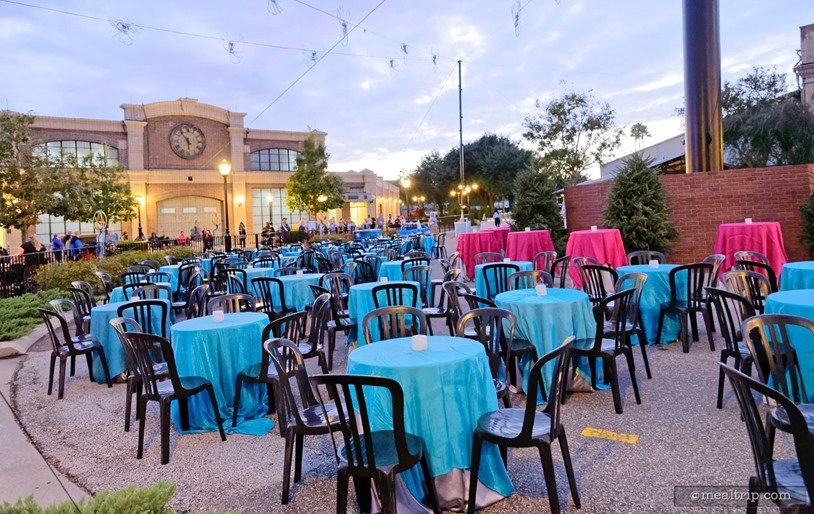 The tables are set up and ready for guests in the "teardrop" area at the end of the Avenue of the Americas.

All of the Frozen-themed desserts are labeled with cards. 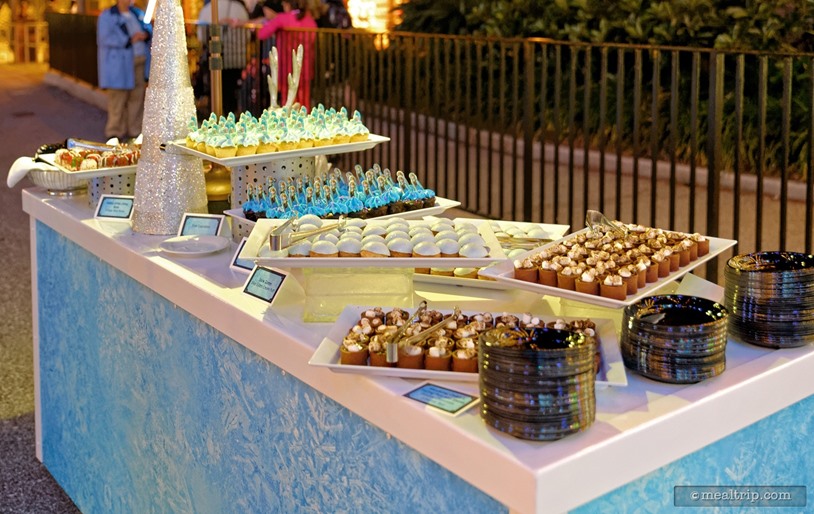 There were two sets of tables that included identical selections which keep the lines at each table short. 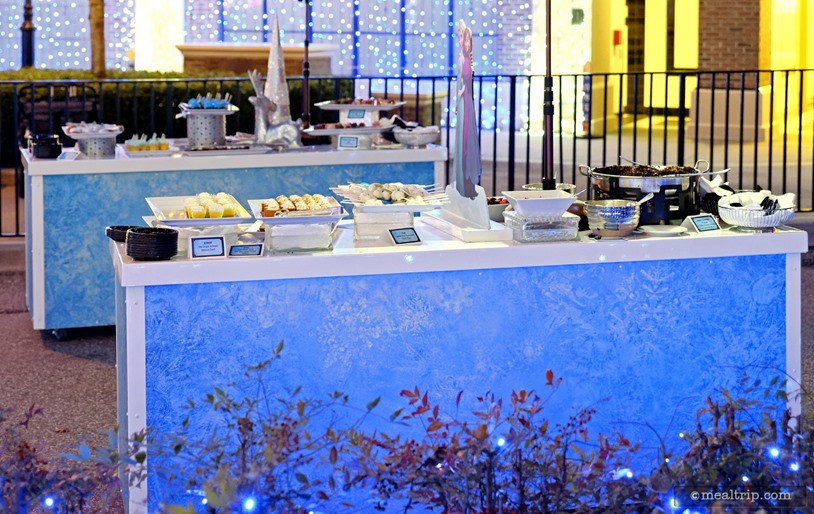 The dessert tables were nicely separated from the seating areas at the Frozen Premium Package dessert party. 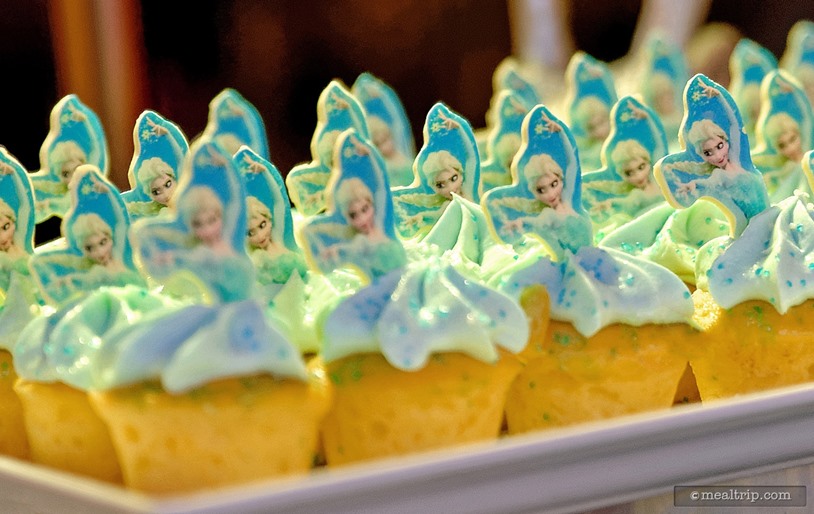 A plate of Elsa cupcakes. 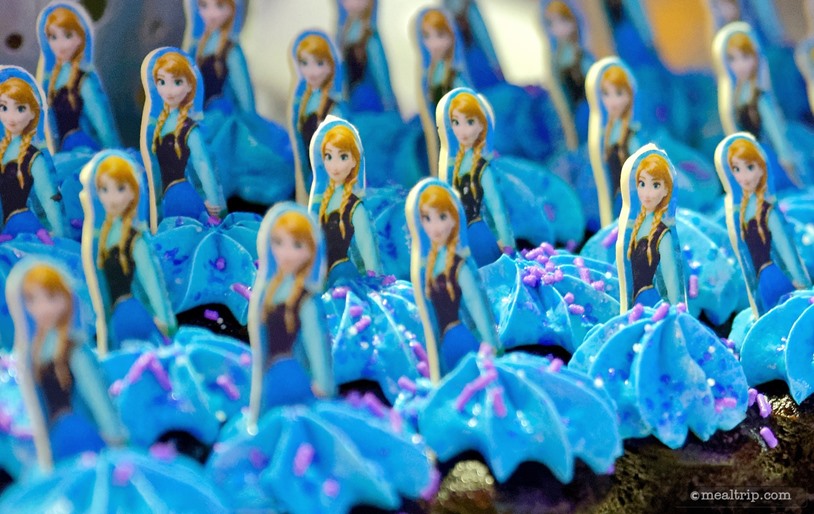 Anna cupcakes all lined up, ready for eating! 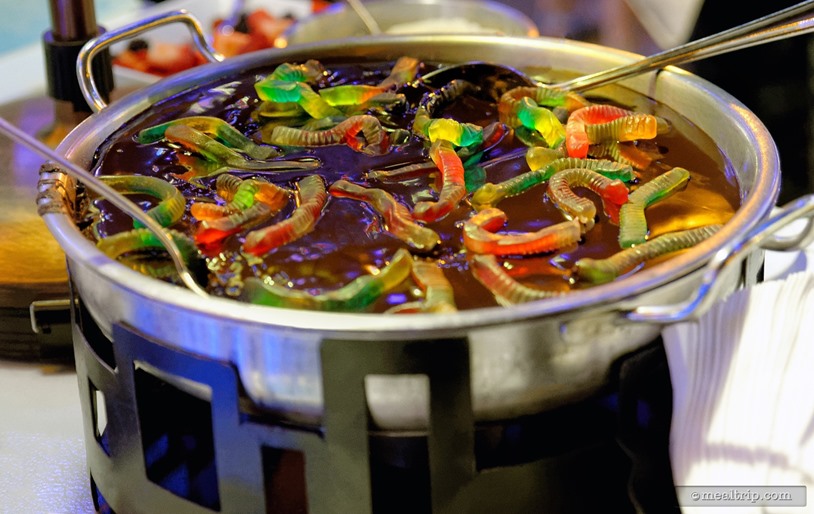 Worms in Dirt (we don't get the themeing on this one) at the Frozen dessert party. 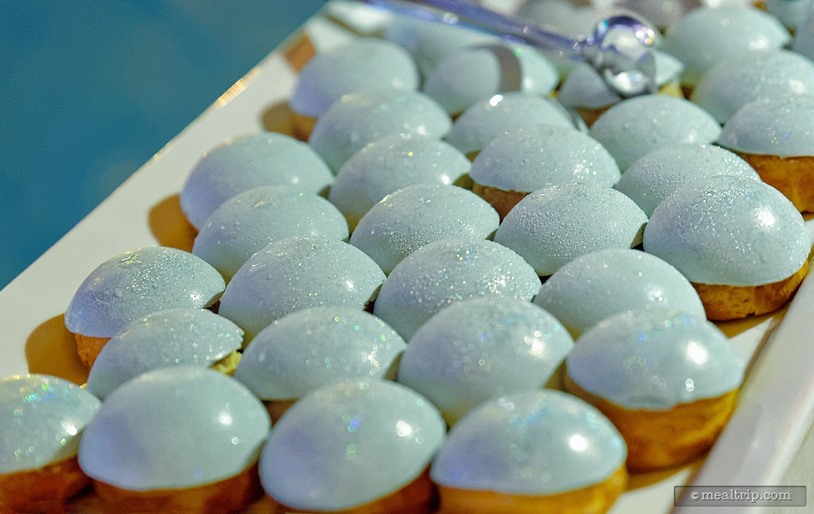 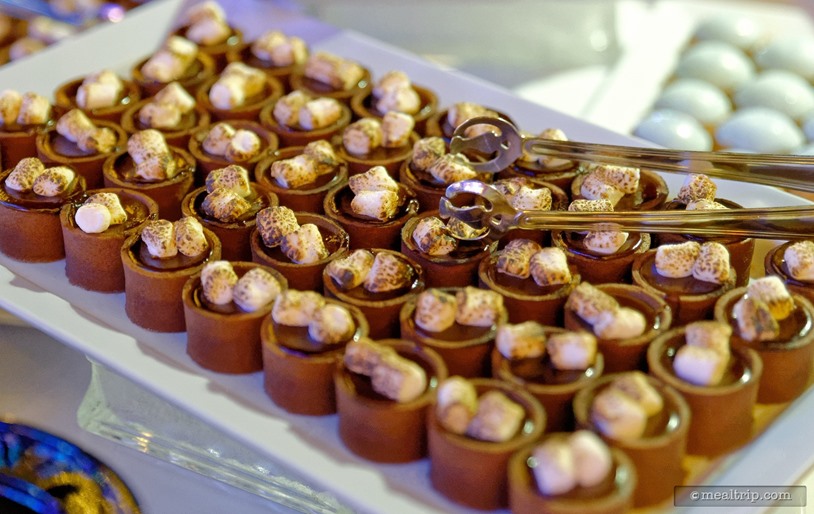 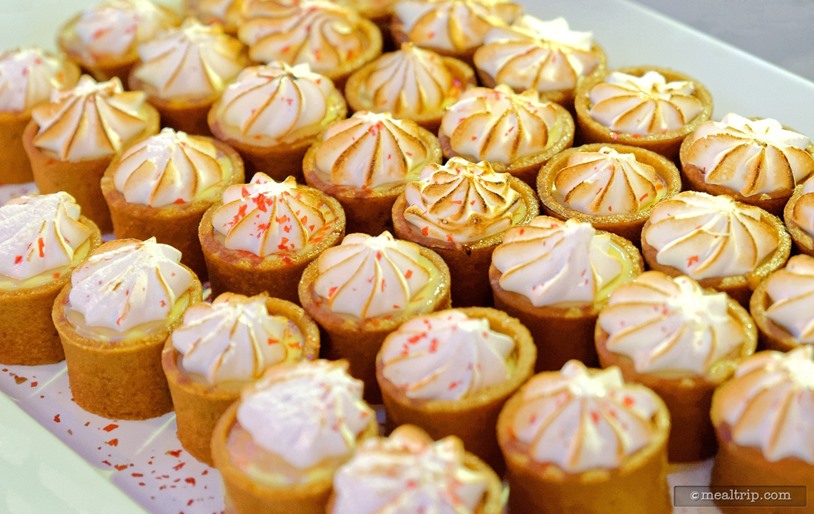 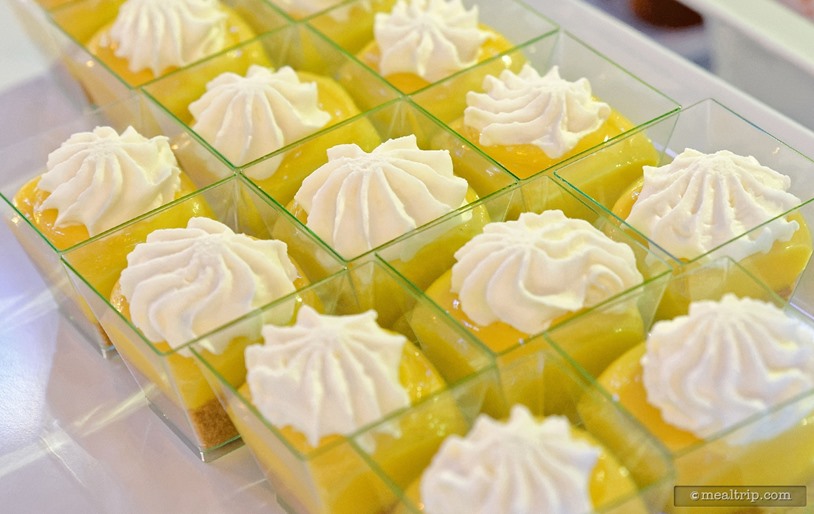 No Sugar added Lemon Curd at the Frozen dessert party. 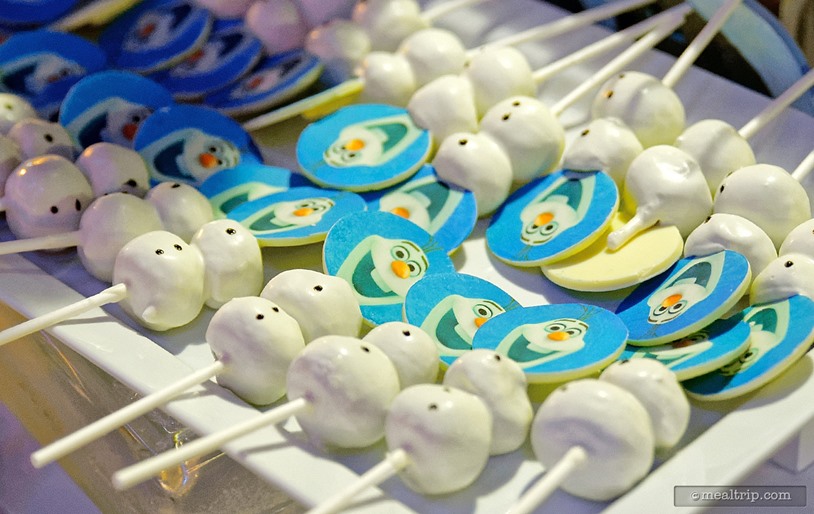 The Olaf Cake Pops won't stand up on their own. 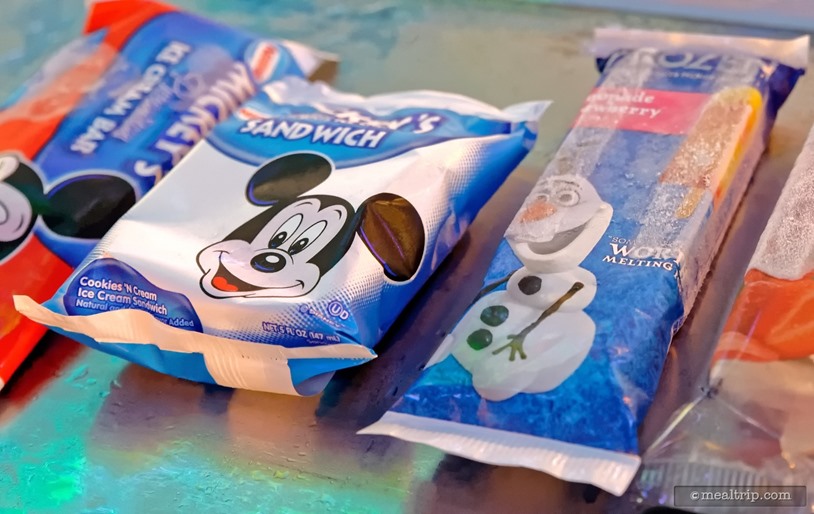 Several "Frozen" treats were on hand and served from a tiny cart near the entrance to the dessert party area. 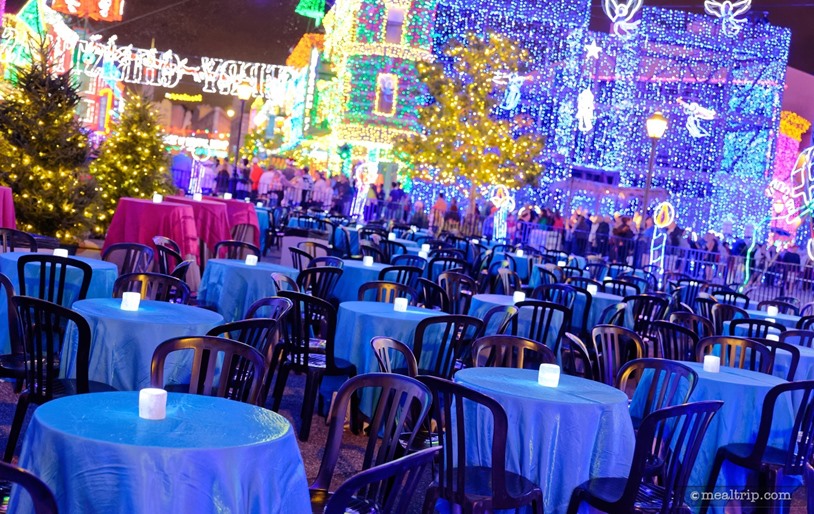 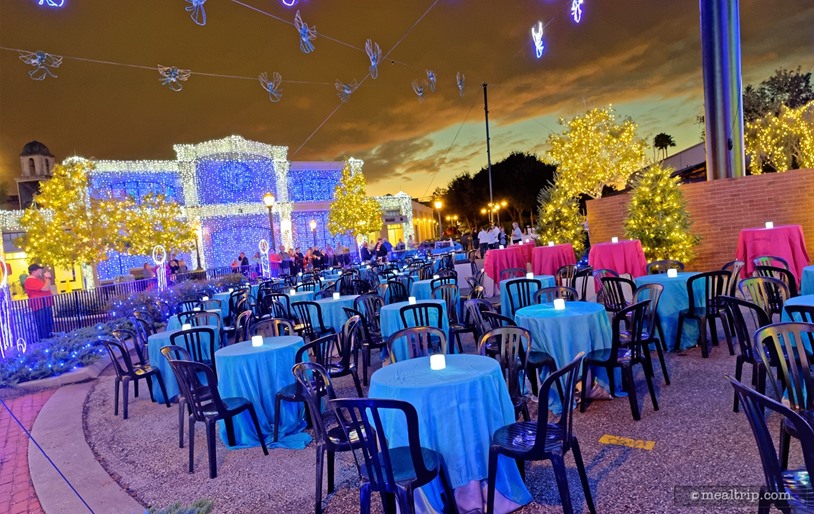 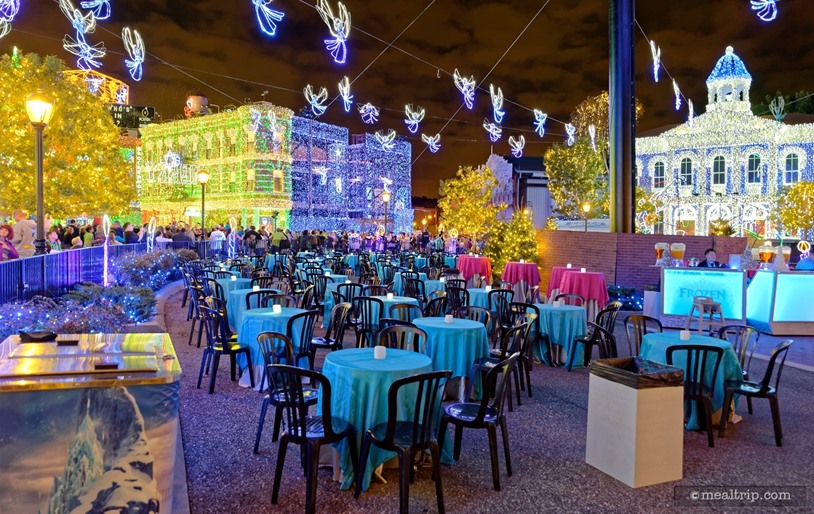 The seating for the holiday version of the Frozen dessert party is directly under the Osborne Lights angels at the end of the Avenue of the Americas. 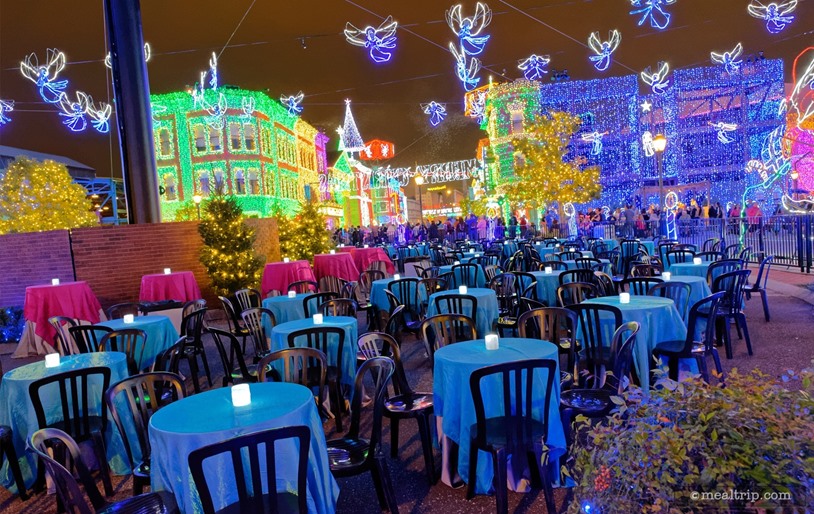 Most of the tables get a direct view down the Avenue of the Americas and the Osborne Family lights. 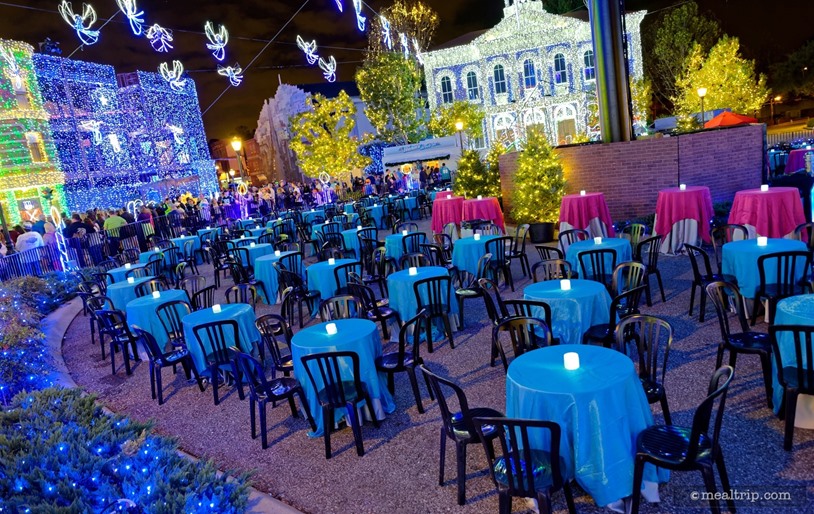 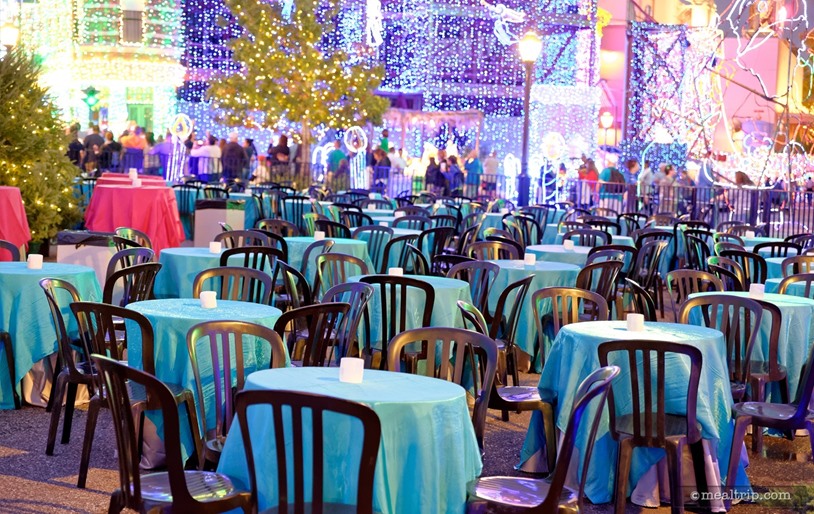 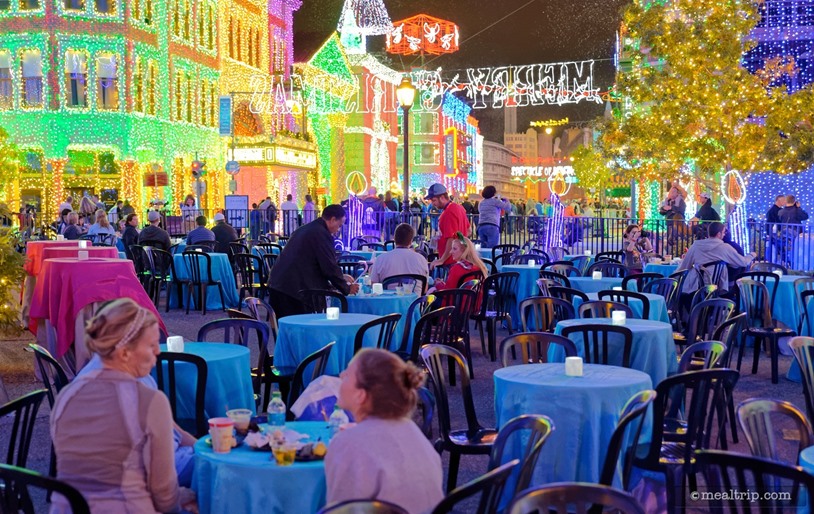 The spectacular Osborne Family lights, as seen from the dessert party area, which is part of the Frozen Premium Package. 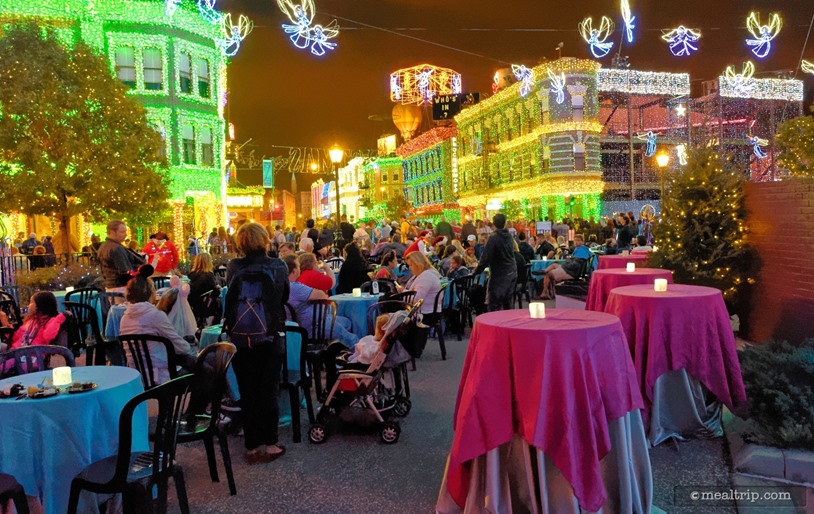 There are a couple of "standing" tables around the base of the "joy to the world" globe, but there also seems to be enough tables with seats for everyone as well. 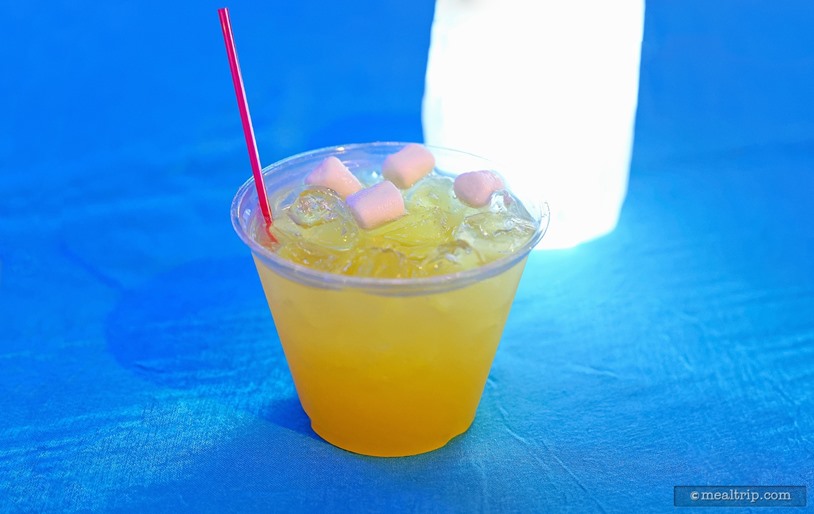 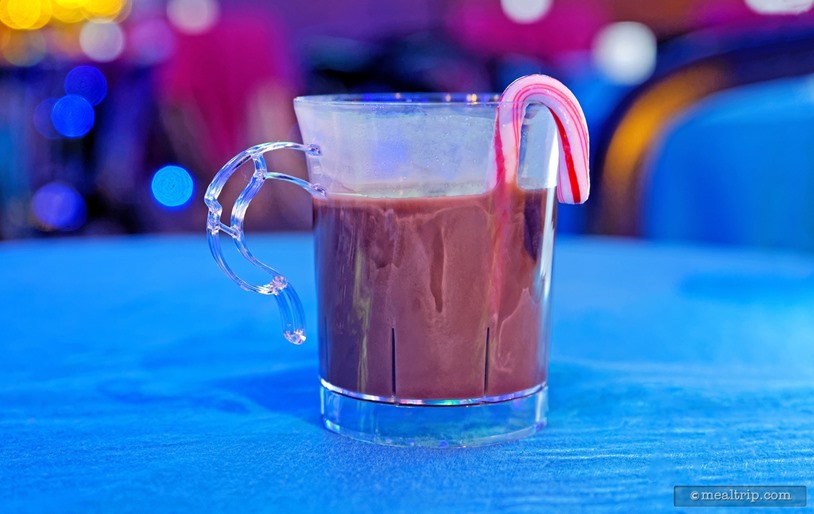 A Peppermint Sauna Hot Chocolate is one of the "adult" drinks at the Frozen dessert party. 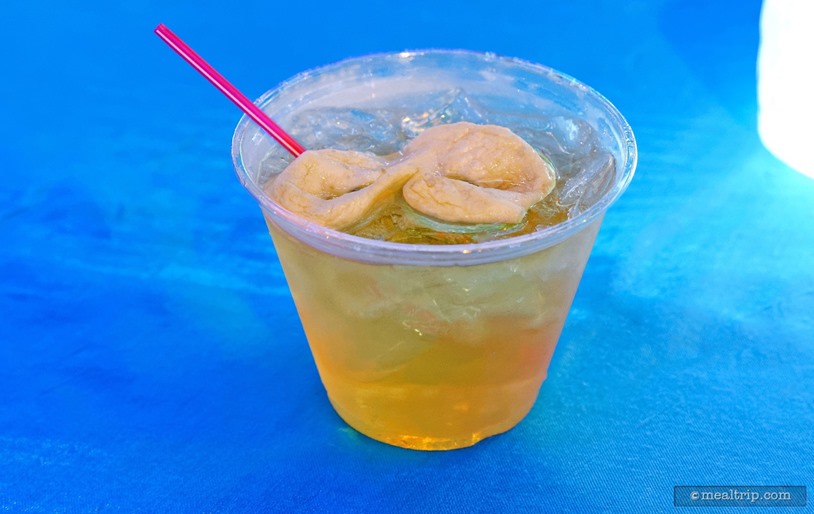 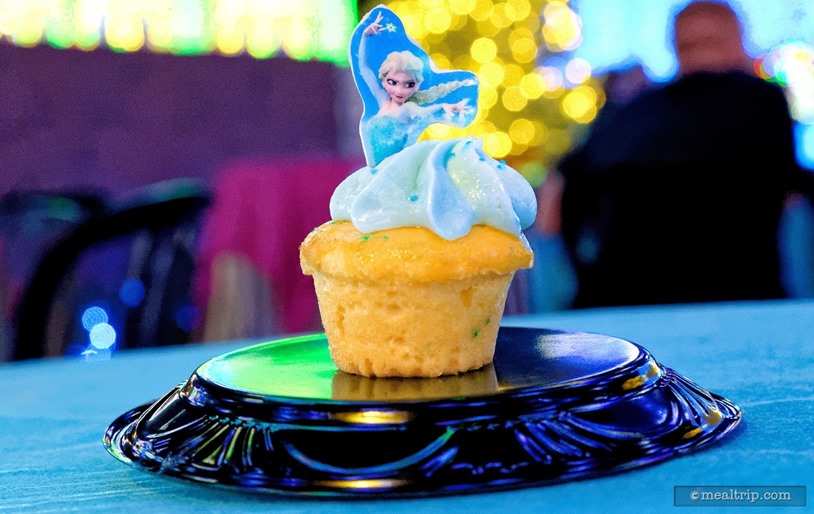 Elsa's cupcake is a vanilla cupcake with blue frosting. 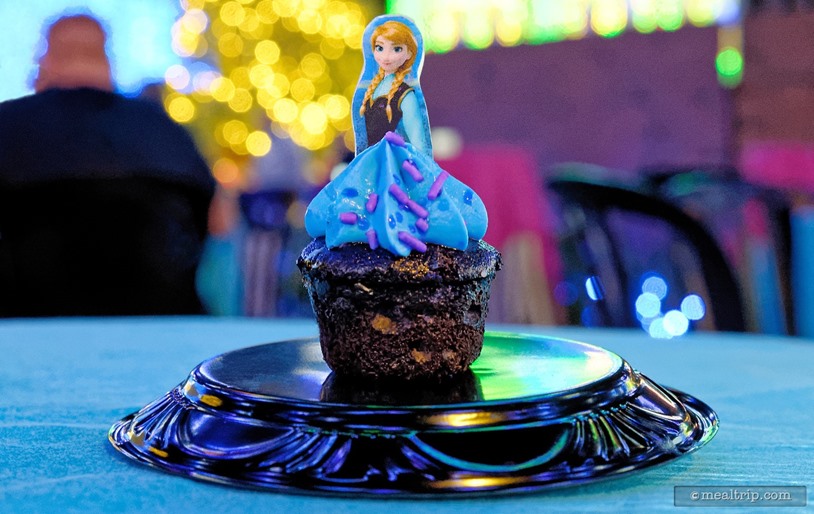 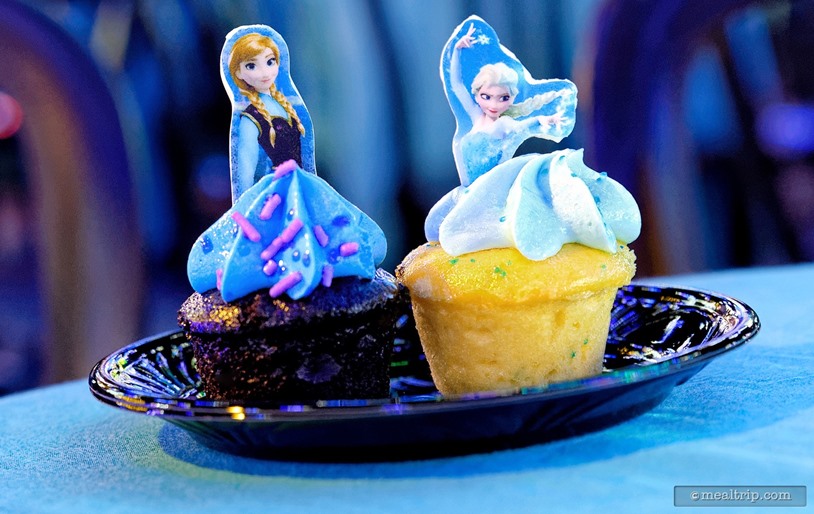 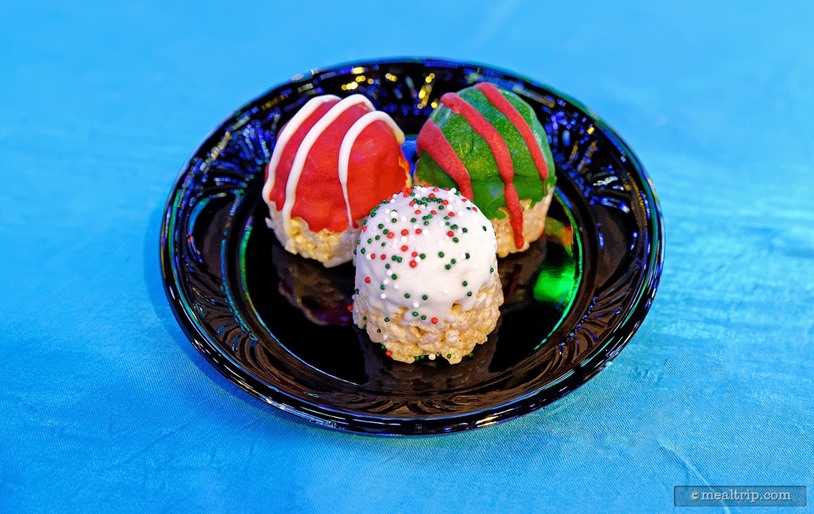 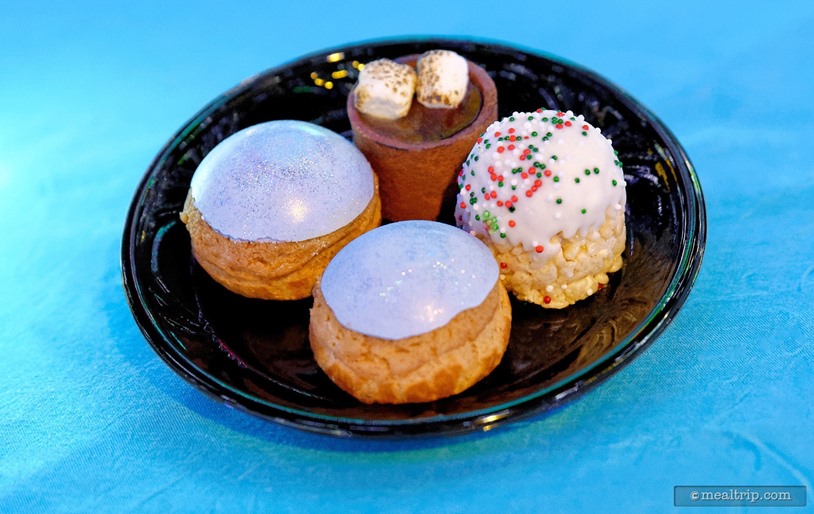 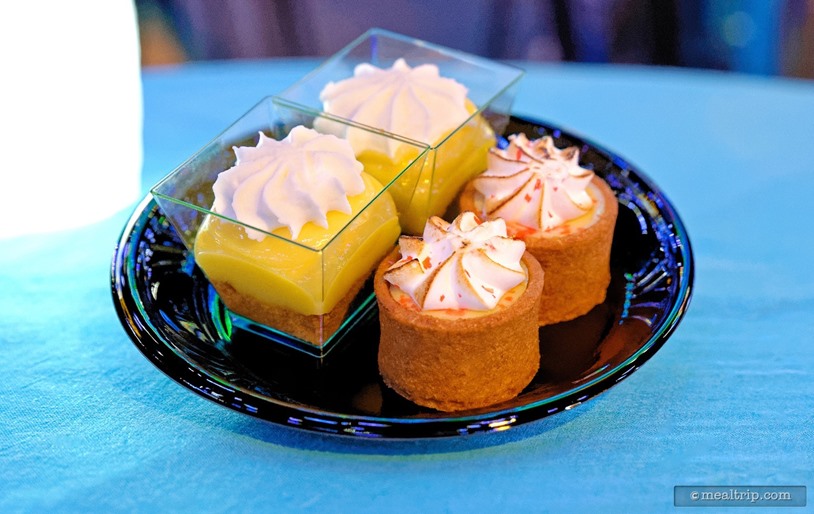 No Sugar Added Lemon Curd and Key Lime Tarts at the Frozen Premium Package dessert party.
return to top of page
ACCEPT
This website uses cookies to personalize content and ads, to provide social media features and to analyze our traffic. We also share information about your use of our site with our social media, advertising and analytics partners who may combine it with other information that you have provided to them or that they have collected from your use of their services. You consent to our cookies if you continue to use our website. A link to our Terms of Service, Privacy Policy, and Cookie Use page is provided at the bottom of our site's home page.